Measuring is knowing, but does the grower also know what happens in the water in between nutrient measurements, and so what happens indirectly with his cultivation? Actually no, but that is the direction to take when growers want to continue optimising. Measuring a lot more is therefore important and CE-Line wants to make this possible with an automatic water and nutrient measurement system.

Wilco Dijkstra: "Every couple of hours nutrient-rich irrigation water, that is our goal". In June, he was present at GreenTech to inform growers about the possibilities of the concept in which online nutrient measurements are combined with individual nutrient dosage. "The Sensory Factory has worked for ten years on the technology to be able to measure macro-nutrients at laboratory levels. By bringing the right reagents and electronics automatically together, which has to be done meticulously, we can measure ten macro-nutrients at the same time." 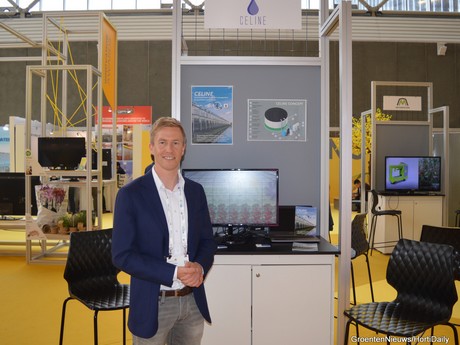 Nutrient fluctuations charted
The greenhouse horticulture is uniquely a sector where there is a need for measuring nutrients (ions) and so it is not strange CE-Line has made the step to this sector. "We really come from the water world, and started, when the technique was ready, we started testing at growers. We wanted to see whether what we stated, could also be realised in greenhouse horticulture practice. It had to be feasible and realistic."

It is an achievement to be able to measure ten macro-nutrients at the same time, as growers now often work with weekly laboratory results to adjust the fertilization strategy for the next week. "Measuring the drain water during the practice test showed that there were fluctuations of twenty to even thirty percent in the nutrient level during the day. Even per hour, significant values were measured."

"That made us think. Growers reuse their drain water with various nutrient levels, to which fixed concentrations of fertilizer is added, based on the weekly laboratory measurements. If the output water frequently varies, it is then logical that by added fixed concentrations of fertilizer, the values of the irrigation water will also vary. Now, growers are often unaware, because they cannot measure it frequently. Particularly when viewed over a week, such fluctuations in the irrigation water can have a serious effect on the cultivation." 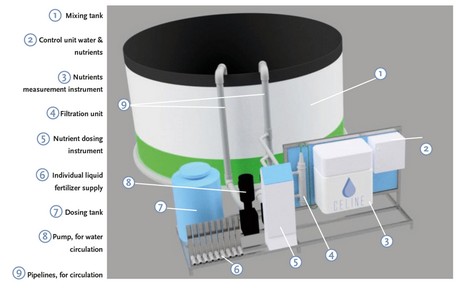 Control, if possible fully automated
Having more insight is one thing, but growers also want to use the extra information for better control. That is possible in two ways. "If the grower already has a system in place with which liquid fertilizer can be mixed in tanks, the concept can be implemented easily. And if a grower already has injection modules for fertilizers, our system for nutrient measurements only has to be connected." 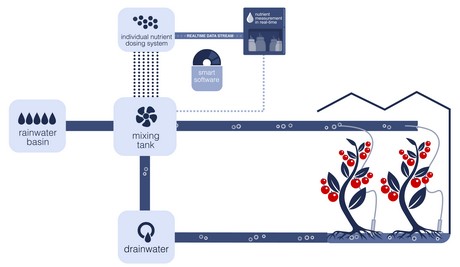 The largest part of the market still works with the a-b-tray principle. "Our measuring system is too fast for that. With a a-b-tray principle, growers cannot adjust their irrigation water quickly enough, unless there are seven trays to switch more rapidly. In practice, this is not the case. In the developments in the field of precision fertilization, you can see that individual dosage units are gaining in popularity. We want to latch on to this development, and therefore we are open to more contact with growers and suppliers to realize this concept together in the greenhouse horticulture sector. Growers can save on water and nutrient usage without technology, and a profit increase of a few percentage points seems possible."

At the moment, the CE-Line concept is also included in a research study by Wageningen University & Research into nutrient specific growing. Read more about it here.