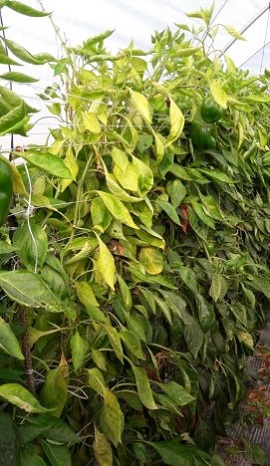 The tomato leaf curl, or New Delhi virus (ToLCNDV) is transmitted in a circulative non-propagative manner by the whitefly Bemisia tabaci. Although it was first reported in Asia on tomato and other solanaceous crops, like eggplant, potato and chilli pepper in the Mediterranean basin, this virus is mainly detected on cucurbits and only rarely on tomatoes and on two wild solanaceous species, Datura stramonium and Solanum nigrum.

In 2018, scientists of Research Centre for Plant Protection and Certification (CREA-Rome), Institute for Sustainable Plant Protection, National Research Council (IPSP-CNR - Naples) and the University of Palermo (Italy) have carried out separate surveys in protected cultivations of sweet pepper in two Italian regions: Lazio and Campania. The greenhouses were in areas with a high density of B. tabaci and where ToLCNDV outbreaks have occurred on cucurbits since 2016.

In the photo, there are sweet pepper plants showing yellowing and curling of the apical leaves associated with tomato leaf curl New
Delhi virus (ToLCNDV) infection in Campania Region on September 2018.

From surveys resulted that some plants showing symptoms of yellowing and leaf curling were found in both regions, whereas fruit symptoms were neither observed nor reported by farmers. Symptomatic leaves were collected during late summer 2018 from different sweet pepper plants as well as from the neighbouring zucchini cultivations showing the typical symptoms induced by ToLCNDV. Total DNA was extracted and the presence of ToLCNDV was investigated.

The characterized isolates showed a high sequence homology also with both the DNA-A from a melon isolate and DNA-B from a zucchini isolate of the ToLCNDV-ES genotype. High homology was also identified compared to the other Spanish isolates collected since the first appearance of the virus (2014), and to the Tunisian (2015) and Moroccan (2018) isolates, confirming the hypothesis that the Mediterranean population of ToLCNDV is highly conserved.

"To our knowledge, this is the first report of ToLCNDV infection on pepper in Europe and shows that sweet pepper could also act as a reservoir of the virus for further spreading to other solanaceous and cucurbits. This study was supported by the Campania Region (Italy) in the context of Plan of Phytosanitary Action 2018," the scientists concluded.