The difference between semi-closed and pad and fan glasshouses

Pad and fan glasshouses have been in use for a long time. Most fruiting plants are prone to reduced quality and yield at maximum temperatures of more than 30 degrees Celsius. The cause is a reduced viability of pollen and as a result, the fruit will be soft, dull, misshapen and smaller in size.

As fruit and vegetable production in greenhouses gained popularity, growers in hot climates resorted to pad and fan greenhouses. The evaporation of water can reduce the air temperature significantly. Everyone experiences the evaporative cooling power of water, after a swim, when you leave the water and a mild breeze starts evaporating the water droplets on your body. It feels warmer to be under the water where no evaporation takes place.

Figure 1 shows how awesome this power is. The psychometric chart graphs what temperature can be achieved through evaporative cooling based on the temperature and humidity of the outside air. Follow the dark blue line at the bottom of the graph that points upward at 45 degrees Celsius. By evaporating the maximum amount of water in air containing 10% humidity, the temperature can be reduced to 22 Celsius (follow the diagonal line to the left). The other two examples show air at 45 degrees with a humidity of 20% and 30% respectively. The corresponding coolest air temperature that can be achieved is 25 and 27 degrees. 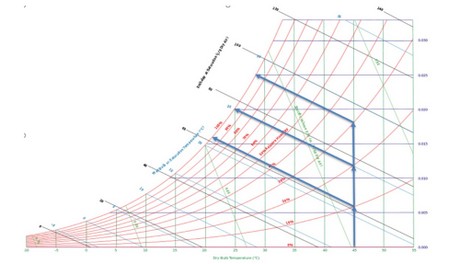 It is not unusual to experience a temperature difference of 6 degrees (or more) Celsius. This complicates growing high yielding crops because maintaining correct and uniform temperatures is one of the main drivers to achieve this. It also complicates the irrigation management as plants in a high temperature area with lower humidity, require more irrigation.

The warming up of the air can only be restricted by reducing the distance between the pad and the fan. Generally, a maximum distance of 40 meters is accepted. This reduces the size of the glasshouse. Moving more air also reduces the problem, but a pad and fan greenhouse already moves significantly more air than a semi-closed glasshouse. Figure 3 shows a comparison between the air exchanges of different glasshouse types. 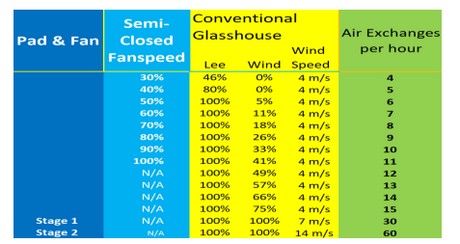 Both pad and fan and semi-closed glasshouses can maintain a cool climate inside independent of outside wind speed. Therefore in the table above a wind speed must be mentioned to represent the air exchange for a conventional glasshouse. Pad and fan glasshouses move a considerable amount of air. This is expensive from a cost perspective and reduces the benefit of CO2. The large volume of air makes it impossible to screen the air inlet for small insects. The larger amount of ventilation capacity allows the pad and fan glasshouse to maintain cooler temperatures when the weather is hot, and radiation is high.

It is not difficult to see that a semi-closed glasshouse achieves a much more even climate as it distributes the air evenly through the glasshouse by using perforated air hoses. The average size of new glasshouses is 5 to 10 Hectares. The size restriction imposed by the distance between pad and fan increasingly causes growers in warmer climates to opt for semi-closed glasshouses.

While the semi-closed glasshouse has a significant better temperature distribution than a pad and fan glasshouse, it is not perfect. Next time in this series, Godfrey will discuss the phenomenon of momentum.

This article is part of a series about growing in a semi-closed greenhouse. Read here more about no-go's for semi-closed glasshouses and cooling.