"Mutual trust is the basis for success"

Mutual trust is the basis for success. That certainly applies to Den Berk Délice: a collaboration between five Belgian tomato companies, which approach the market as a single brand and according to a shared vision. Guaranteeing continuity is an important common thread in business operations. The four entrepreneurs are investing in several areas to ensure that Den Berk Délice remains to flourish in 2026. The focus is not on the entrepreneurs; the company is the main focus. 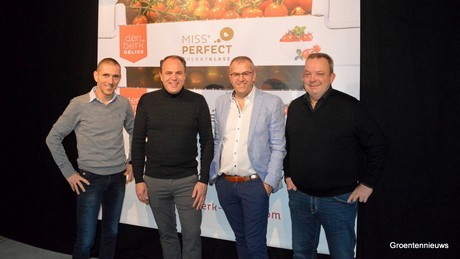 The four entrepreneurs during the opening of the Den Horst location in December 2018.

Belgium market
Den Berk Délice illustrates that Belgium should certainly not be taken lightly when it comes to high-tech greenhouse horticulture. The various locations of the company are built according to the most modern insights and all meet the modern horticultural standard. But in other respects too, Den Berk Délice, which is located some ten kilometers across the Dutch border, can be considered progressive and distinctive. The organizational form of the company is far from standard. Den Berk Délice represents five separate greenhouse horticulture companies and four entrepreneurs, who in 2014 decided to join forces.

This did not come out of the blue: Luc Beirinckx, Hans van Gool, Paul van de Mierop and Koen Lauwerysen had known each other for almost 25 years. "We came into contact with each other in the early nineties through a study club in the Noorderkempen (in the region of Merksplas), where we all ran a horticultural business at the time," says Paul van de Mierop. “From the first moment there was a connection and we were all on one line. What does that mean? It is difficult to explain, it is primarily a feeling. Compare it with your partner when you first meet them. Of course; in the beginning, you're testing the waters, but gradually mutual trust grows."

The entrepreneurs soon started a second study group together, in which they shared all company figures. “Labor, purchasing, marketing, sales; we had no secrets for each other. That was unique, especially at the time. In this way we were able to further strengthen our companies, and the mutual trust between us became stronger. ”

Gradually, the collaboration was further expanded: the growers started arranging their purchases together, and also made study trips abroad, to strengthen their vision and business operations. In 2014, the entrepreneurs took the next step in the collaboration: the companies, which are a maximum of half an hour's drive apart, then united under the banner of Den Berk Délice.

'Trust as foundation'
Paul van de Mierop emphasizes that working together can get you a lot and can take you far. “The condition is that you do it with people that share your passion and vision. And it's based on trust; that is the most important part. When there was talk of running a company together, we very consciously wondered if this would work. You are inclined to see all possible problems that could arise. And in your own environment, you also see situations in which parties ultimately do not reach the same conclusions, and where things go wrong. When we started forming Den Berk Délice, I was very aware that this could happen to us too; did we really have the same ideas and did we really want to follow the same course? To what extent was our relationship of trust strong enough to start a company together? To tackle this, we spoke extensively with each other about our visions and ideas, so that we were truly certain that we are on the same line."

What is mutual trust based on? “As said, it's mainly about feeling. We are sincere towards each other; you know there are no lies. Trust is also based on the belief that 4 x 1 in our case is not 4, but much more. I would dare to trust everything I own to Koen, Hans or Luc; we trust each other 300 percent.”

The companies of Den Berk Délice are managed according to the same mission, vision and policy and market their product together. This is based on the conviction that, by working together, they are a stronger partner for their customers. The goal of Den Berk Délice is to grow and market tasty and high-quality flavorful tomatoes all year round. “Originally, all entrepreneurs behind Den Berk Délice cultivated meat and vine tomatoes, but all of them had gradually started looking for distinctive character. This urge to innovate is also something that binds us ", says Paul van De Mierop. “We have continued this line within Den Berk Délice; the focus is on growing specialties, where taste is the most important guideline. We do not go for bulk, but want to distinguish ourselves in the market, and in this way guarantee the success and continuity of the company.”

Excelling in your own specialty
An important aspect of the success of Den Berk Délice also lies in the fact that the power of the individual entrepreneurs is used to the maximum. In other words: everyone excels in their own specialty, as a result of which the entrepreneurs jointly take the company to a higher level. For example, Paul van de Mierop focuses on marketing and sales. Everything happens in cooperation and consultation with Coöperatie Hoogstraten. Koen Lauwerysen is involved in cultivation, varieties and new planting and is responsible for general affairs and external communication. Luc Beirinckx conducts procurement negotiations, takes stock of the financial figures and closely monitors the work performance and figures of the various companies. Finally, as a "tomato freak", Hans van Gool focuses on innovation and tests countless new varieties at his company. “What are the most important selection criteria for new varieties? Taste, taste and more taste! That is what the retail wants. In addition, good presentation and distinctive character on the store shelf are also important."

The five companies that operate under the flag of Den Berk Délice are officially still separate entities. General issues from which the entire group benefits - for example, costs for marketing, research, development of packaging - are proportionally distributed among the various companies. But because of the joint vision and policy, all noses are heading in the same direction and there is a real "Den Berk Délice feeling". The management of the company plays a key role in this. This team consists of 45 people, who manage the employees at the various companies. "In the past two years we have been building this managerial layer, which determines the power of Den Berk Délice," says Paul van de Mierop.

“Previously, we as entrepreneurs had shorter lines with the shop floor, but due to the growth of the companies and the number of employees, we were forced to develop a new structure. And by creating a management team, and placing responsibilities more in the organization, the company can also function independently of us in the future. The company is central, not us entrepreneurs."

Den Berk Délice tries to bind employees to the company as much as possible. By offering career opportunities, being open and honest, ensuring a pleasant working environment and continuously investing in training and development. “We want to challenge people and offer them the opportunity to use their talents. For example, by offering education and training, but also by ensuring good knowledge transfer within the company. You cannot force anyone to stay, but in this way we hope to bind our employees to our company as much as possible. After all, they determine the success and continuity of the company. Employees are the strength of Den Berk Délice; we put that into practice.”

Holding your own
When Den Berk Délice was founded in 2014, the entrepreneurs also set themselves the goal of communicating directly with retail. "I had sold my cultivation company a few years before, and gained experience at a trading company," says Van de Mierop. “Here I saw that there were opportunities for growers to enter into a direct conversation with the supermarket. After all, you then receive targeted feedback from the customer, and you can respond to their wishes and new trends faster. Retail knows how to find us more and more. Among other things because we have a large production volume, and can therefore quickly respond to the demand of customers. In addition, we actively support retail in optimizing tomato sales. For example, by developing innovative and distinctive concepts and by being flexible when it comes to packaging. We also constantly monitor market developments and try to respond to them. We want to unburden the customer from a to z; a retailer with a tomato demand must turn to Den Berk Délice. This is starting to take hold more and more in the world of retail."

Hans van Gool adds that retailers attach great value to communicating directly with growers. “They want to be sure that they get complete and correct information about a product. And who can better convey the passion for a product than the grower himself? This also has added value. We have also experienced significant growth in recent years and we still see plenty of market opportunities. We currently represent an area of ​​more than 50 hectares, and in 2021 there will be another 18 hectares. In terms of production, we try to keep up with the times as much as possible; for example, we invest in LED lighting."

Although Den Berk Délice has its own identity and brand in the market, they are still members of Coöperatie Hoogstraten. A conscious choice. Paul Van De Mierop: “Cooperative Hoogstraten offers a wide range of fruit and vegetables. By working together with them, we can offer the customer more than just our tasty tomatoes. That also strengthens our market position. In addition, we are looking for a win-win situation with the cooperative and we are given the space to realize our goals and ambitions. For example, the cooperative has extensive knowledge about the fruit and vegetable category and shares with us the necessary information. In short: we work in all respects in a triangle: Den Berk Délice, Coöperatie Hoogstraten and our client.”

Besides this Koen Lauwerysen, Luc Beirinckx and their spouses are currently working on another 10 hectares Glasshouse in Rijkevorsel. In 2021 another 8 hectares will be added to this. In addition to the growing locations, Den Berk Délice also owns a separate packaging department.