'Security camera' helps grower take action before it's too late

Nowadays the grower has no shortage of extra 'eyes'. Cameras, for example, help growers to monitor the growth of their crops. Yet there are very few cameras that can help growers to detect problems in cultivation early on in the way GreenspectIR, a hyperspectral camera that looks over the grower's shoulder, can do that. "We very much believe that you have to see the crop 24/7 to learn to recognize trends, with which growers can intervene early if a problem threatens to arise," says Dennis van der Wiel of Polariks, the company behind the technology. 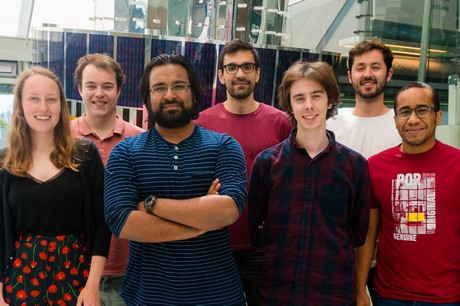 Polariks, located at the Space Business Innovation Center in Noordwijk, has for a number of years been using technology with which planets are discovered to fathom crops. A team of five, in addition to biotechnologist Dennis and co-founder and astronomer Max, is working on hyperspectral cameras and the technology behind them. “Such cameras can inspect the light spectrum much more accurately than we humans can. People only see a bit of green, red and blue, but special hyperspectral cameras can read the light spectrum much better with the help of highly sensitive sensors and a piece of software. This makes it possible to find out much more about a plant."

Drought stress and fungal diseases
For example, it appears to be possible to provide insight into drought stress before a plant hangs limp. “People notice drought stress often only when a plant starts to limp or turns brown, but GreenspectIR picks up on signals much faster. By having the camera keep a constant eye on a crop, patterns become visible.”

Also about the development of fungal diseases. GreenspectIR has been specifically developed to detect the onset of fungal problems early. Extensive testing has recently been carried out at strawberry growers. The trick is to convert the collected data into information. “You can aim a camera at anything, but a grower can only benefit from it if the right signals are linked to the right plant characteristics. Growers let us know every week what they want to see and then it is up to us to automate that.” 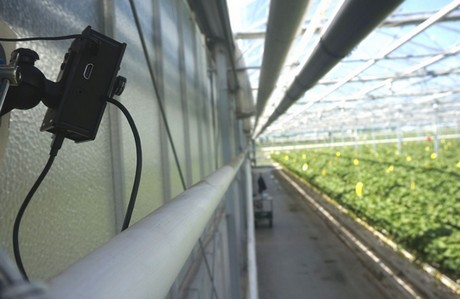 Low crops
Up until now, tests were mostly conducted on low crops, such as strawberries or potted plants. With these types of crops it is easier to oversee everything from the side of the greenhouse. “We want a grower to be able to monitor a quarter-hectare greenhouse with one camera. This is indispensable if greenhouses are to be able to function autonomously.” Tests have also been done in high crops such as cucumber. “The most important thing is that you can discover cultivation problems in time. The focus is therefore on clinical pictures."

In the beginning, the cameras cost between 20,000 and 50,000 euros, but by focusing the cameras on a specific application, the cost has been lowered significantly to 1,500 euros per camera. It also helps that the camera can work independently of a robot or machine. But if it is necessary for high crops to drive through the crop, then Polariks will take a look at it. "Carts are often there anyway, so mounting a camera on such a cart would be a breeze." 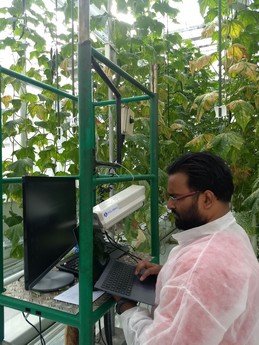 The value is in the data
Polariks does the production of the cameras themselves. “We are still talking about small volumes, but if demand increases, we can scale up. If a grower starts his new crop next season, then I certainly want to hang our cameras there to be able to follow the crop from the beginning. ”The data is visible on a proprietary platform, but integration with other platforms is being worked on. “It is important for growers that they can view all their data on one platform. Certainly, now that more and more sensor techniques are finding their way to the greenhouse. But no more than ten parties really have knowledge of the technology that we are working on throughout Europe."

An arrangement with the special cameras can be seen at the World Horti Center until 30 August 2019.