Food scientists have found that a combination of lactic acid with food grade sodium hypochlorite is an effective sanitizer to process fresh organic vegetables.

Organic foods like vegetable sprouts are getting more popular as people become more aware of the potential benefits to their health and well being. However, food borne pathogen infection caused by contaminated vegetables during each stage of cultivation and the post-harvest process is a major issue, particularly for fresh organic vegetables.

A research team led by Yang Hongshun from the Food Science and Technology Programme at the chemistry department at the National University of Singapore has found that a combination of organic acid (lactic acid, 2 percent v/v) and food grade sodium hypochlorite (4 mg/L) is an effective sanitizer for organic food products. The team tested the sanitization ability of different combinations of electrolyzed water, sodium hypochlorite, and organic acids on organic broccoli sprouts containing a type of bacteria, Listeria innocua. 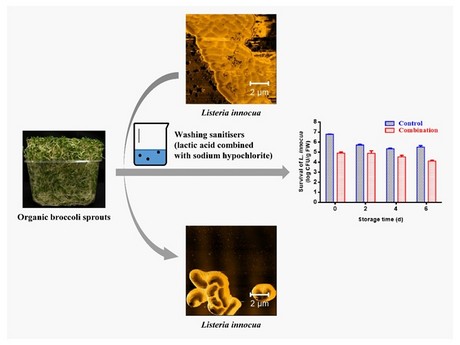 Listeria innocua is a common, non-pathogenic bacterial species that has similar characteristics to the pathogenic species Listeria monocytogenes, which causes many food borne infections. They also found that the sanitization treatment did not have any observable adverse effects on the sensory quality (color, texture, and smell) of the organic broccoli sprouts over a storage period of six days.

Traditionally, washing sanitizers such as chlorine solutions (sodium hypochlorite, 50–200 mg/L) are commercially used to disinfect the freshly cut produce but they may not be able to meet the regulatory requirements for processing organic produce under the United State’s National Organic Program (NOP). This approach, which uses sanitizers approved by the NOP, is able to achieve a sanitizing effect comparable to those used for freshly cut produce.

In their experiments, the research team found that their approach is able to reduce the bacteria population by about 1.8 log CFU/g (colony forming units per gram) on organic broccoli sprouts after washing treatment for two minutes.

The team showed that the lactic acid was able to disrupt the cell membrane of Listeria innocua within a short time. This eventually led to cell rupture. The addition of food grade sodium hypochlorite could induce oxidative damage to the bacterial cell, making the cell walls more permeable to the lactic acid. This results in better sanitizing performance.

Chen Lin, a PhD student working on the project says, “The selected washing sanitizers are Generally Recognized as Safe (GRAS) and approved by the United States NOP. They are convenient, effective, and relatively low cost for consumers, which makes them suitable for the food processing industry.”