According to the team of Beijing Kingpeng, a large greenhouse builder from China, the supply of fresh vegetables in winter in Northern China is thanks to the rapid development of agriculture in the region. "Among all kinds of horticultural facilities, solar greenhouses are widely used in this region because of the advantages of simple equipment and low cost."

"Therefore, the modernization of solar greenhouse is the result of the developments of the greenhouse industry, but modernising the structures is also required in modernizing the industry."

The greenhouse wall structure can be divided into three periods:
The wall in the solar greenhouse in the first period (figure 1) was made out of a single material. Materials used were dry ramming, soil piling and bricks. During this period, the function of the wall was bearing the structure and insulating heat. The average height of the earliest back walls was 1.5m. 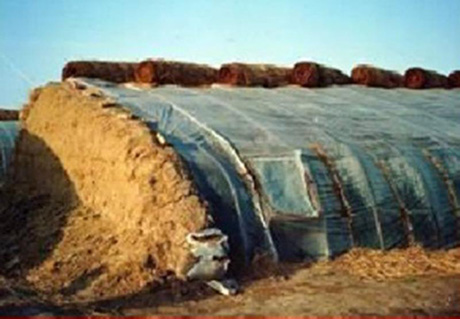 A gang wang type greenhouse: the barrier is clamped outside and the earth wall greenhouse was enclosed by straw, in order to enhance heat preservation. 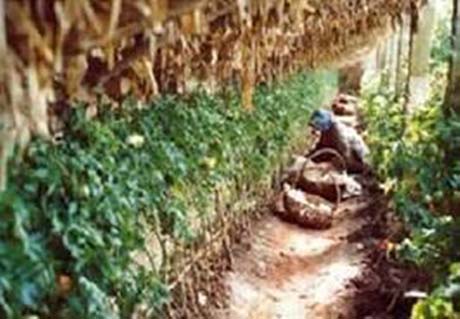 During the 1970s~1990s the back wall height was improved to the "Gan Wang" type and the "anshan Ⅰ" type greenhouse, with a height of 1.5 ~ 2.0 m. Also a back fill was added to better the thermal insulation. The total thickness of the rear wall bottom was 1.5m.

During the 1990s, the single material wall was adjusted and more materials were used in the wall. In this period the functionalities focussed both on thermal insulation and heat storage performance. 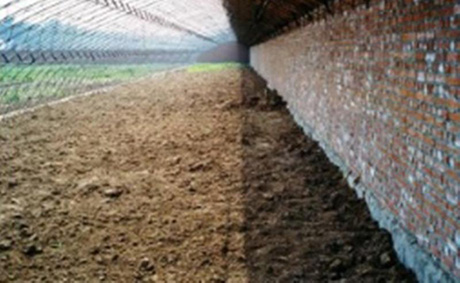 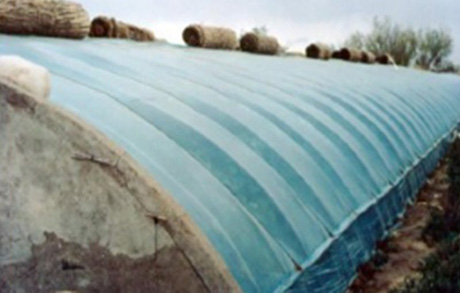 More materials
As shown by the "Anshan Ⅰ" type solar greenhouse (above), the rear wall height increased to 1.6m, the back wall materials changed to a cob wall. The wall height is 1.6 m, in the ground is another 0.6 m and the wall thickness was 0.5 m.

In the "LiaoShen Ⅰ" type multiple materials were used for the first time, namely double clay brick. The clay bricks are equipped with 100~200mm thick polystyrene foam plastic sheets, which greatly enhance the heat preservation effect. The structure of the wall eventually becomes a brick wall, polystyrene board and mortar, with a height of 3.5m and a thickness of 0.6m.

Heat absorption and storage
Some Chinese horticulturalists started analysing the heat storage capacities of the wall. They concluded that the thickness of the earth walls should be 1m. All day the wall is an "endothermic body", and during the night the wall functions exothermic.

Therefore the inside of the wall should have strong heat absorption and heat storage capacity. The combined materials should be used for heat conduction, heat release and isolation. According to their research, perlite is the best intermediate insulation material, next are cinder, sawdust and eventually it being hollow.

One researcher first applied an aerated concrete brick on the outside wall to increase the heat contribution of the wall for the greenhouse at night, which was a breakthrough at that time.

Some other Chinese researchers compared the structure and heat transfer capabilities of the solar greenhouse back wall, and concluded that a single material wall can hardly keep up with the multi-layer wall filled with an insulation layer. This wall has bigger thermal resistance, heat storage, heat insulation and heat preservation capacities and can also be smaller, which benefits to the use of materials.

New research methods
Finally, a researcher in China made a theoretical analysis of composite heterogeneous wall and single wall by using a frequency response method, diving into the heat transfer capacities of the wall. It is concluded that the wall with heat insulation layer is more energy saving than the brick wall, and the polystyrene board is better than brick as heat storage material.

After entering the 21st century, fewer studies of wall structure were done, however, someone used the thermal reaction coefficient method and a thermal environment mathematical model simulation, showing that the thickness of the polystyrene board as the heat storage material of brick wall should be 0.1m and that the thinner brick walls have better insulation effect.

New materials
In the third period, new materials are being used. From 2005, China stopped using clay bricks in solar greenhouses. Some Chinese scholars studied new building materials and used aerated concrete blocks as a substitute for the solid clay brick since it offers the benefit of energy conservation and environmental protection.

Greenhouse wall development trend analysis
Beijing Kingpeng International Hi-Tech Corporation has investigated the use of solar greenhouse wall materials and structures around Beijing, as shown in Table 1. How will it develop into the future?

"What we see from the developments of the wall structure of solar greenhouse in China, characteristics as energy shortage and low economic level are of high importance. Solar greenhouse designs adapted the principle of "low input, low energy consumption" taking energy conservation and emission reduction into practice", they conclude.

"At the same time, from the perspective of simple construction, the development of low-cost energy-saving solar greenhouse will be the main way for the Chinese horticultural industry to break through the resource and environmental bottleneck."

In recent years, much research was done into the development of new greenhouse walls. "The purpose is to study how to use the surplus solar radiation energy during the day, store it and release it at night, so as to achieve peak load reduction, increase the indoor temperature, and then reduce the loss of the heat from the building."

"In the solar greenhouse, heat storage technology has only recently become established. Chinese research on the application of new materials in the construction, to achieve energy conservation and emission reduction, has been relatively short, with few achievements and mostly in theoretical research, and its application in practical engineering is not extensive enough."

"The selection and application of phase change materials should be adapted to local conditions. The research of new materials and construction structure is very important for the performance of the wall."

In addition to the study of phase change materials, many researchers are also discussing how to choose the heat storage and insulation materials suitable for the wall of the solar greenhouse. Researches from the Institute of Environment and  Sustainable Development in Agriculture of the Chinese Academy of Agricultural Sciences designed a light and simple prefabricated active energy storage solar greenhouse.

"On the basis of maintaining the advantages of the solar greenhouse, the function of the wall is divided into two parts. One is the heat storage and release function, based on the active heat storage and release system of the media. The other is the heat preservation and heat insulation function, for which the assembled heat preservation wall can be optimized by a light and simple structure"

Beijing Kingpeng International Agriculture Corporation has designed and developed a type of assembly solar greenhouse with glue sprayed, cotton thermal insulation material as the wall and rear roof, which has been implemented in the China-Romania Joint Project approved by Ministry of Science and Technology of the People’s Republic of China.

Meet Kingpeng on the GreenTech in Amsterdam in stand: 12.416