Mastronardi Produce and AppHarvest have announced construction of a high-tech greenhouse in Morehead, Kentucky, which will bring an infusion of jobs and award-winning produce to the Appalachian states.

AppHarvest announced today it has closed an $82 million deal with Equilibrium Capital to build the company’s 60-acre greenhouse in Morehead, Kentucky. In addition, ValueAct Spring Fund has led the company’s Series A, with existing investor Revolution’s Rise of the Rest Seed Fund also participating.

“The 60-acre, state-of the-art facility will be one of the most sustainable, efficient, and technologically advanced greenhouses of its kind,” says Paul Mastronardi, President and CEO, and the fourth-generation family member to lead Mastronardi Produce. “This is a significant milestone for Kentucky’s farming and food sectors.”

The new build represents Phase One of AppHarvest Founder and CEO Jonathan Webb’s vision to stoke the region’s economy, which took a major hit with the decline of coal.  It will create year-round access to locally-grown SUNSET® tomatoes and cucumbers, and it will be the largest high-tech cucumber greenhouse in the US.

Both Mastronardi and AppHarvest share a strong commitment to developing communities, and the Morehead location was chosen with careful intention.

“Situated in the heart of America, the facility is within one day’s drive of 70% of the US population in a region known for its hard work, ingenuity, and tenacity,” says Webb. “This greenhouse will be a source of opportunity, optimism, and prosperity for the entire Appalachian region.”

“We believe everyone should be able to buy fresh vegetables,” says Mastronardi. “Thanks to this partnership, consumers in Kentucky and surrounding states—Ohio, Tennessee, Virginia, and West Virginia, to name a few—can look forward to flavorful SUNSET® produce arriving at stores within hours of being hand-picked. And increasing availability of local produce will continue to be a priority for us.” 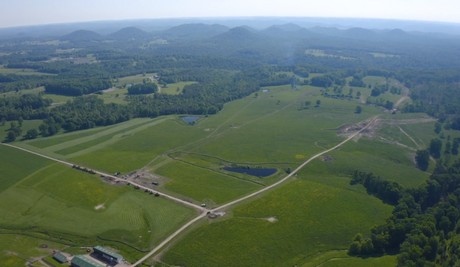 Construction will begin immediately on the company’s first controlled-environment agriculture facility in Appalachia with its opening planned for 2020.

Among the investments:
In the $82 million all-cash deal, Equilibrium Capital’s Controlled Environment Foods Fund will provide funding for the construction of AppHarvest’s 2,762,063-square-foot greenhouse.

ValueAct Capital Founder and CEO Jeffrey W. Ubben has joined AppHarvest’s board of directors alongside ValueAct Spring Fund leading a Series A financing round for the company. The amount of the Series A financing will not be disclosed.

Revolution’s Rise of the Rest Seed Fund, led by AOL Co-founder Steve Case and best-selling author J.D. Vance, has made a follow-on investment in AppHarvest as part of the Series A, adding to its initial seed funding.

Click here for the problems the company wants to solve with the new greenhouse.