Each morning hundreds of boxes filled with frozen seafood, dried fruits and vegetables, oriental medicines and health foods are queued up in a store room in Ho Chi Minh City, Vietnam. They will undergo a process similar to security screening at airports, but with higher intensity beams of photons or electrons – in a food irradiation programme installed with IAEA support in the last two decades.

Depending on the dose, food irradiation will ensure that the root vegetables and fruits do not sprout or ripen prematurely; that parasites are killed and spices are decontaminated; that salmonella is destroyed and that fungi that could spoil meat, poultry and seafood is eliminated.

The process was first introduced in Vietnam in 1999 with the help of the IAEA and the Food and Agriculture Organization of the United Nations (FAO), and a large market for irradiated products has since opened up, significantly increasing the ability of companies to export their food products. Food irradiation has matured into a mainstay of the country’s food industry and is an important contributor to the country’s agricultural competitiveness.

“In 1999 we were irradiating 259 tonnes of food per year, and this has grown to 14,000 tonnes by 2017,” said Cao Van Chung, Head of the Electron Beam Department of the Vietnam Atomic Energy Institute’s Research and Development Center for Radiation Technology, VINAGAMMA. “This shows a real boom in demand for our work. Today we are one of the leading facilities in the country in the field of radiation technology – pioneering in food irradiation.” 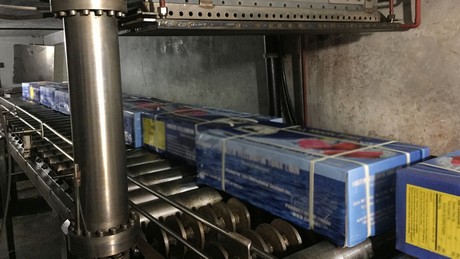 Introduction of gamma and electron beam irradiation
This growth has been possible thanks to the introduction of two irradiation methods. A gamma irradiator introduced in 1999, which uses ionizing energy from a radiation source shielded in a concrete room, and an electron beam (EB) irradiator has been in use since 2013. EB irradiators do not rely on a radioactive source, using instead streams of highly charged electrons produced from specialized equipment such as a linear electron accelerator. The food never comes into contact with radioactive material, and the irradiation both maintains the quality and increases the safety of the food while leaving no residual radioactivity.

While the process of irradiation for the two methods is the same, each brings distinct and complementary advantages, Chung said. The gamma irradiator uses tall aluminum boxes, which can accommodate a broad range of product sizes, and the boxes are moved through the irradiation chamber around the radioactive source suspended on an overhead monorail system. Products require two rounds of irradiation to ensure all sides of the packaged product have been treated. 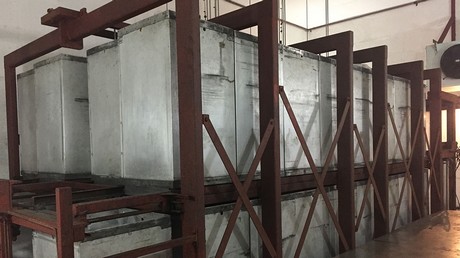 The EB irradiator, on the other hand, contains double sided beams, which makes the irradiation process three times quicker than the use of the gamma irradiator, because all areas of the product can be irradiated in a single round. However, the EB irradiator has a limited dimension, with a maximum box size of 60x30x50 cm and weight of 15 kg, so for larger and heavier products gamma irradiation must be used.

The machines work side by side, running 24 hours a day seven days a week, only stopping over the Vietnamese New Year period.

Before the introduction of the gamma irradiator and EB accelerator, spoilage prevention of food products such as seafood, fruits and vegetables was carried out using traditional methods including canning, refrigeration and freezing and chemical preservatives, which due to lower effectiveness, hindered the manufacturers’ ability to export their products.

The irradiation machines were acquired with support from the IAEA’s technical cooperation programme, which also supplied training for staff and expert advice. Vietnam is one of 40 countries that the IAEA is supporting in this area.

Growth in the use of radiation technology
VINAGAMMA has grown from 20 employees when the Center was set up in 1999 to 79 today. Besides food irradiation services, it provides radiation sterilization of medical products and pasteurized foodstuffs, and commercializes its research and development products, such as plant protectors used in agriculture and gold and silver nanogels used in medicine.

The science: Irradiation
Irradiation is the exposure of a substance to beams of electromagnetic radiation. For example, microwaving food involves exposing it to beams that have just enough energy to cause water molecules in the food to rub against each other and generate heat by friction. But food irradiation involves higher frequency beams that have enough energy to give atoms positive and negative electrical charges (ionization) for an instant. It is used to improve food safety and to maintain its quality. During irradiation, energy is transferred into the treated product just like when food is heated, but it doesn’t involve a significant increase in temperature.

The most important irradiation process parameter is the amount of energy absorbed per unit mass of food, which is termed ‘absorbed dose’ or simply ‘dose’. The technology can be used to destroy microbes that cause food poisoning; it can help keep food fresher for longer because it reduces the numbers of spoilage organisms; it also slows down ripening and prevents sprouting in foods like onions, garlic and potatoes.  Therefore, it improves food safety and reduces waste.

In gamma irradiators the source of radiation is a radionuclide, usually cobalt-60 (60Co).  Gamma rays are electromagnetic waves and hence they can pass through dense materials. Products can be irradiated in large sacks or shipping cartons, carried through the irradiator in boxes or stacked on a pallet that will be transported to and from the irradiator in hanging carriers or on roller bed conveyors. It may take an hour or so to irradiate a large pallet of products.

In electron beam irradiators the beams are produced by electricity in a machine. Electrons have a negative charge and a small but appreciable mass and so readily interact with atoms in food, transferring all their energy over a relatively short distance. Therefore, electron beams can only be used to irradiate smaller food packets that they can easily penetrate. However, the energy can be delivered quickly, and the process takes a fraction of a second as the beam is scanned over the food.