Eastern Victorian farmers are calling for urgent water security, to protect them in the upcoming season.

Food and Fibre Gippsland board member, and Chief Executive of Bulmer Farms in Lindenow, Andrew Bulmer says the region's water supply, the Mitchell River, is heritage listed, and does not contain a dam or any other form of storage.

Once levels drop below a certain environmental flow point, farmers and irrigators are restricted in stages; stage one, for Bulmer Farms allows for 13 megalitres to be taken a day, and by stage ten it is down to 0.7 megalitres and eventually there is a total ban - which is currently in place.

"The whole of Gippsland, just like the whole Eastern Seaboard is in drought," he said. "Particularly here in East Gippsland where we sit at the moment, we are in dire need of water security. We are currently not allowed to irrigate from the river. There are shallow aquifer bores and that is what is sustaining us, but we need approximately seven megalitres a day to run or business,- we are only extracting 5.5 megalitres. When we go from the river, where we have good pump setup, and can pull good volumes and pressures of water for our irrigation systems, to a bore, your volume and pressure is greatly reduced." 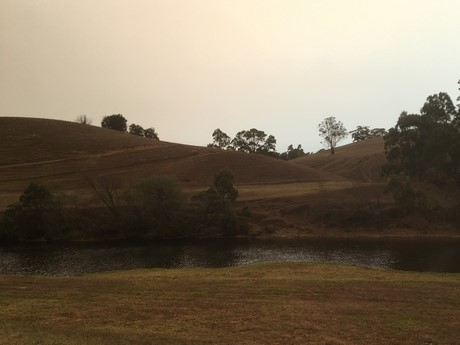 He adds that this year has been the hottest year on record, and that has a flow on effect, meaning that there is less jobs, reduced planting, and therefore less revenue.

"There is also reputational risk to the region as a major supplier of fresh and bagged salad to major supermarkets and wholesalers," Mr Bulmer said. "It hits your bottom line pretty hard. It is difficult to produce under significant drought conditions; it's more about keeping crops alive, rather than growing them forward. You get a lot of water patterns in your crops that affects your yields and quality. If you stress your crop, it opens them up to pests and diseases. I would say this year, we are 10-20 per cent down this year, which is a significant drought year, compared to last year which was a reasonable standard year."

Director of Frais Farms Kim Martin adds that this season's production set to be halted earlier than expected unless significant rain arrives.

"It's been terrible - it highlights the Mitchell River's lack of irrigation and water security for the growers," he said. "You can have the largest megalitre entitlement in the Mitchell River Valley, but if there's no water in the river, you haven't got anything. That's the situation we find ourselves in today. There is no rain on the forecast."

While Manager of Rosengal Group's Lindenow farm, Dom Galati told Fresh Plaza that he has experienced just 120 millimetres of rain since September, and most of the season so far was on restricted water supply from the Mitchell River, but has since been cut off completely.

"It started out very cold and dry between September and December and we have had virtually no rain," he said. "So, a farmer like myself, I cannot irrigate, and it has been like that for the past month. I don't have any bores - there wasn't any on the property when we bought it. So, I have been back on the farm for seven years, and I have never had a bad year like this one."

Mr Bulmer says that despite feasibility studies into a water security plan that has been done in the past, coming up with government support for a project that will create efficient water supply has been challenging, as previous proposals created logistical and environmental issues. The most logical thing to do in the short term is for farmers to create their own water storages, on farm, but that is costly and gaining support from the banks is difficult.

"We need access to water from storages in critical times when we might get kicked off the river," he said. "For us, we feel the drought goes in cycles; you tend to get a 5-6-year good cycle and a 5-6-year drought cycle. The dry land guys claim that this is year three of the cycle for them, while it hasn't impacted us quite as hard from a vegetable cropping point of view with water reliability in the past two years, but the trend has led to where we are now. Now is the perfect time where we are calling on government to co-fund, dollar for dollar, investment for local water infrastructure." 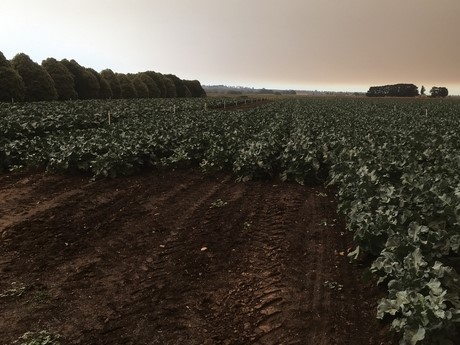 The Federal Government has a fund called the National Water Infrastructure Fund, but it has to be applied for through the State Government, and Mr Bulmer says proposals are currently being drawn up - but action is needed quickly.

"The river will come back on again over the winter, it will flow again when we get snow," he said. "That's where we want to be putting it away to keep for next summer. If we don't do anything in the next 6-9 months, we are in trouble again. It's just something that cannot be ignored. If we don't future proof and prepare for what these disasters might do in the future, we have done ourselves an injustice. High prices on supermarket shelves can be avoided if we plan well."

Water shortages are also threatening to the East Gippsland Vegetable Innovation Days and International Spinach Conference, which is due to take place in early 2020 - which are expected to attract visitors from all over the world to the region. Eastern Gippsland, over the Summer months grows around 70 per cent of the national spinach supply, and the international event has only been held outside America once.

"The plan is to host the Spinach conference in Lakes Entrance, 30 minutes down the road and run the field day off the back of that in Lindenow" Mr Bulmer said. "We think we would be able to pull 1,000 delegates. There are a few hoops we need to jump over, one of those is the drought. It is hard to host an international field day in the middle of a drought. So, we are hopefully going partner with Southern Rural Water to secure the water supply and partner with Horticulture Innovation Australia in hosting the international conference."

For more information on the East Gippsland Field Days: www.egfielddays.com.au