Cucumbers are available all year round, but fresh cucumbers from local farms only start their new season in March. To produce high-quality fruits, the heat-loving plant grows in Germany and Central Europe predominantly under protection in film tunnels or greenhouses. At home, it should not be kept below 10°Celsius.

Cucumbers are a popular vegetable of the Germans; they've occupied fourth place for years among the most popular types of vegetables, after tomatoes, carrots and onions. Originally from northern India, cucumbers belong to the family of cucurbits and they are therefore related to the melon.

Quality features: color, strength and no damage
Fresh cucumbers are erect and firm. They show their varietal green color without yellowing and have a smooth, shiny shell. As cold-sensitive fruits they should not be kept below 10°C. Cucumbers are sensitive to ethylene, so they should not be stored with mature, ethylene-yielding fruits such as apples. Cucumbers must be free from bruising and damage that tends to spoil them. Specimens that still have a tapering lower end are not sufficiently developed. 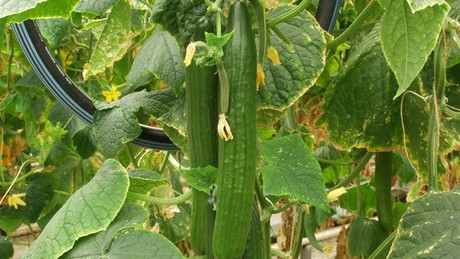 Cultivation mainly in Bavaria, Lower Saxony and North Rhine-Westphalia
According to the Federal Information Center for Agriculture (BZL), German growers produced around 58,630 tonnes of cucumbers on 221 hectares of under glass acreage in 2017. The three leading producing countries are Bavaria, Lower Saxony and North Rhine-Westphalia, followed by Baden-Württemberg, Brandenburg and Saxony. The fast-growing plant needs air temperatures between 22 and 30°C and a consistently high water supply to produce high-quality fruits. Therefore, cucumbers in Central Europe are grown mainly in foil tunnels or in heated greenhouses.

With a per capita consumption of 5.1 kilograms, the self-sufficiency rate in 2017, however, was just under eleven percent. This was offset by imports of 483,340 tonnes, of which 85% came from the Netherlands and Spain.

Low calorie and refreshing
Cucumbers consist of about 96 percent water and are with 12 kcal per 100 g of low-energy vegetables. Vitamins and minerals, like Provitamin A, are found predominantly in the peel. They can be lost when peeling, so it is better to wash only thoroughly.