"It has been a busy, but exciting week”

It’s green and pink and it’s not the HortiDaily Christmas tree. It’s the new greenhouse of Sterling Suffolk, near Great Blakenham (UK). The first tomato plants of the new company arrived last week and the LEDs are lighting up the crop brightly. “It has been a busy, but exciting week”, says Horticultural Director Richard Lewis. The 5.6 hectare farm is the first semi-closed greenhouse in the UK. Over the next couple of years the project will be expanded to 17 hectares. 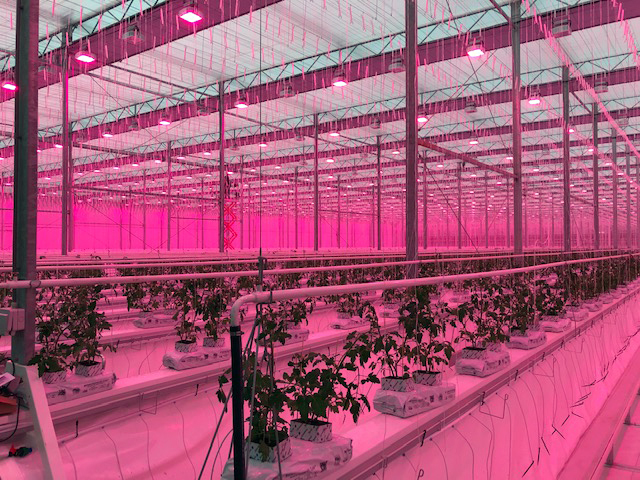 Everything is coming together
“We wanted to have the plants in this week, since Christmas is coming. You know how it goes with projects – in the end there’s always stuff to be finished. Last week the Hoogendoorn computer was installed, the irrigation system and the electrical connection were finished on Monday and Holland Plant delivered the plants on Tuesday. I’m very pleased with them – the quality is amazing. They’re a bit bigger than we were expecting, but they arrived in very good condition. We put them on the growbags within 2 hours and then started clipping them, since they’re about 55 cm. Now everything is coming together.”

Richard is not just referring to the plants being grown, but also means the project as a whole. The complete Sterling Suffolk project is thought through. The company’s philosophy is to create an ecological company whilst growing in an economic way. “We want to have a light footprint on the earth. That’s the core of the company: we believe in treading lightly on the planet.”

All decisions being made are based on this vision. For starters, it’s a semi-closed greenhouse – a Van der Hoeven ModulAIR. The system utilises outside air for cooling, whilst the inside air is being re-used while recovering the valuable CO2. The constant over-pressure and the insect nettings for the air coming in and going out make it impossible for harmful insects to enter the greenhouse, especially since the windows can be kept closed almost throughout all circumstances. 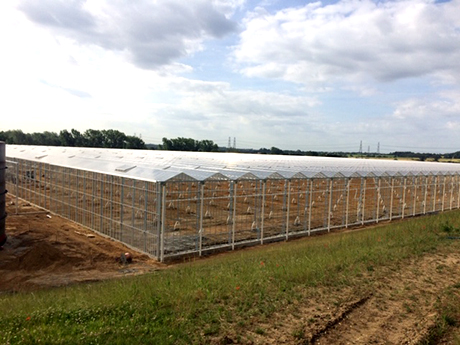 Insects
It might seem remarkable for a greenhouse company, but the insect population is stimulated as well. This does not only go for the beneficial insects that will take care of crop protection within the greenhouse, but also outside the farm. Around the nursery, woodlands exist which have been fully preserved and made with wild flower meadows. In front of the nursery is a strip, 1 km long and 40 meters wide, where wildflowers will be grown. “To encourage the ladybugs, the insects and of course especially the bees around the greenhouse”, Richard explains. “The ecological plan is not a gimmick to us, but is something we carry around in every aspect of the company.”

Also in the greenhouse sustainability has led the way. The plants are growing on Milleniumsoils coco coir – a reusable substrate – and the choice for LEDs was driven by the wish to use as little energy as possible. Water will be recycled completely as well.

In the greenhouse various smaller TOVs will be grown: cherry, cocktail and baby plum tomatoes. “We’ve chosen these varieties because it is a product high in taste, and since we focus on the local market we want to offer a premium product, high in quality.” 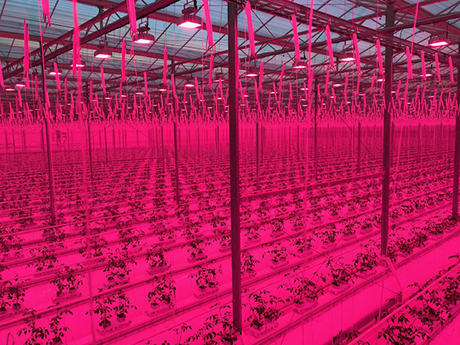 He explains how this is getting more important. “We’ve seen various diseases and pests that used to occur in Southern Europe, going up North as well. And then there’s the climate going more extreme – only last year, for starters, the summer was harsh in all of Europe. The semi-closed greenhouse adds more security towards the future. Whilst the semi-closed concept in this climate might not offer the 30% increase in production, we calculate for more southern climates, it still offers a 5-10% production increase. Combined with the sustainable growing concept and the added climate and pest control, it offers an attractive opportunity in this region as well.” 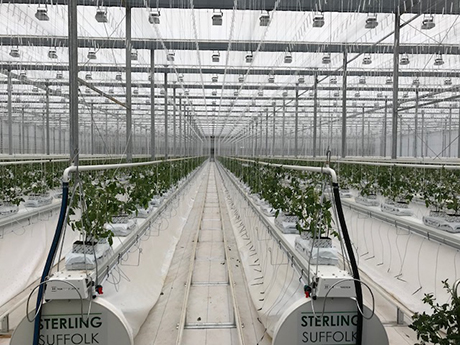 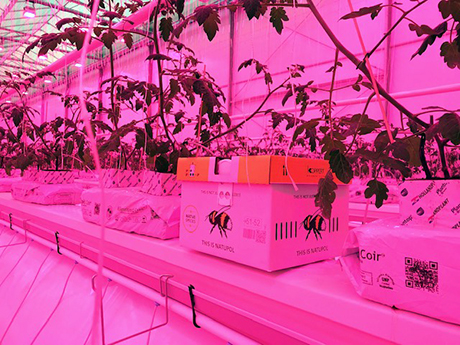 For Sterling Suffolk it’s a new way of growing. “The challenge is also not to respond to outside circumstances”, Bas confirms. “The windows are closed most of the time and when the settings are right, the challenge is to recirculate as much air as possible and mix it with the outside air to get the most favorable climate.” Van der Hoeven will support them with this: Their in-house crop consultant will come over frequently. Van der Hoeven also organizes the “ModulAIR Platform” twice a year, during which they bring growers from all over the world together, to interact and get the most out of their greenhouse.

“It will be a learning process”, Richard confirms. “That’s also why we’ve selected Van der Hoeven. We get a lot of support from them. The same goes for our other suppliers like Plessey and Hoogendoorn. Their expertise and knowledge is why we work with them. They are leading and experienced companies – and obviously want to make this a success as well.” 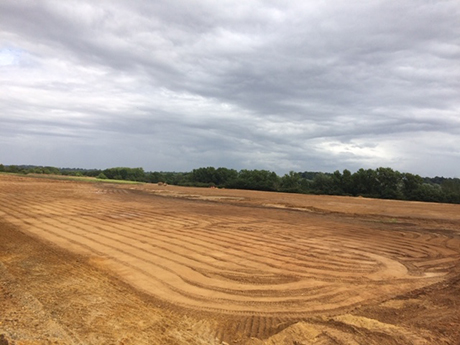 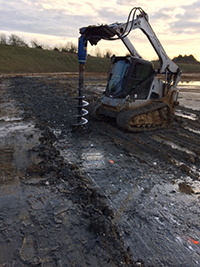 s set up in only a couple of months – a very tight schedule. “We couldn’t delay for a week since Christmas is coming”, Richard says. “Tuesday the 18th had to be the deadline. We started to build 1st April after the wettest Easter ever”, he recalls and laughs: “The contractors for the foundation arrived from the boat and spent 3 hours doubting whether they were to pack up and go home or to start building. After all they started and 10 days later it was all in place.

Pictures: pre build (above) and day 1 of the build (right) the 3rd of April

”From the wettest Easter, the year went on to warmest summer, which offered challenges as well – especially since the greenhouse is semi-closed. “It got pretty warm, and we couldn’t ventilate that easily as the cooling system wasn’t yet in place. We managed to do it, thanks to many ice-creams and water dispensers. Through summer we even got ahead of schedule as we didn’t lose any time due to rain or wind.” 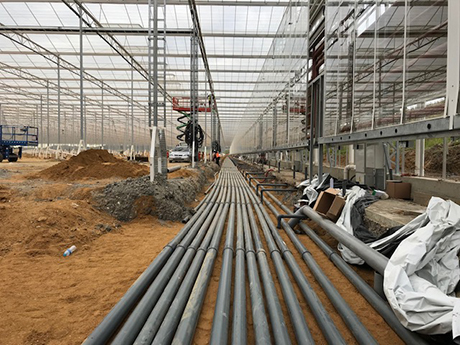 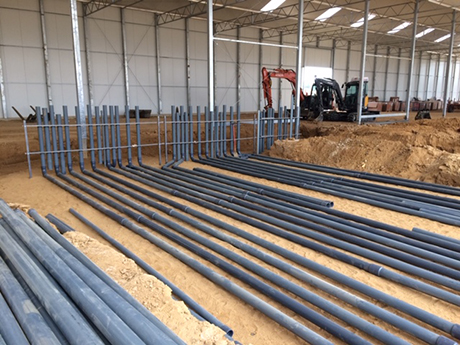 As said, currently 25% of the greenhouse is planted: the lighted acreage. The first tomatoes are to be harvested at the end of February. The unlighted plants are to be planted early January. ”It allows us time to train the current workforce as well”, says Richard. “At the start of this year Sterling Suffolk was only four employees, plus the founding partners. Now there’s 20 people employed and on January 1st 2019, another 15 are to join.”

With labor being an issue for growers all around Europe, he calls himself lucky to find the labor required to run the sites. “It is fair to say that we’re not developing in a region where horticulture is a common thing. For one thing, that is a good thing; there is less pressure with insects and diseases. On the other hand, it makes it more difficult to find skilled people. It was not easy, but we found them. More important to us is that a reasonable percentage of them, about 40%, are locals, which is also one of our goals. People who live in the neighborhood will be with you a long time. Finding new ones is a challenge.” 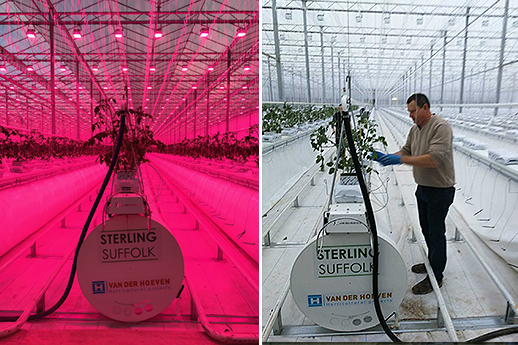 And there they are! Richard planting the first crop.

Expansion
The first tomato might not be harvested yet, but still Richard and his team are on the lookout for expansion and novelties. The total Sterling Suffolk project will consist of 17 hectares, realized in three phases. The final decision hasn’t been made to start the expansion, but the leveling for phase 2 is in progress and Richard hopes they can continue construction in 2019. All the equipment is set for this as well: The heating system for phase one will provide the expansions with the right temperature, as well as the irrigation system and the heat storage. “Expansions are an add-on: everything is designed to be a full project”, Richard shows. “Everything is in place, the infrastructure, including the transformers, are big enough to light the complete zone. As far as we’re concerned now, that’s also the final goal: lighting the complete acreage.”

First of many With the pink LEDs shining on the crop, the plants growing quietly and the company getting ready for their first growing season, Richard can find time to reflect on the project after what has been a pretty crazy year. “We’re a new company and growing to be a pretty big one, especially for the UK industry. To us it is not about just building another glasshouse, but building a unique glasshouse – completely built from our ecological mindset. And it’s not just us: we see it in the horticultural industry of the United Kingdom: we’re moving forward. I hope that growers see the benefits and that it will be the first of many.”