“The bell pepper market has become difficult for us lately”, says Ido Yaari of the Israeli export company, Arava Export Growers. “We are focusing on Russia, Northern America, and the UK. Russia is a huge market with its own problems. In the winter, we dominate that market. So, it works for us. Our market share has also increased there since the boycott.”

He goes on to say that it is difficult to compete with Spain in Europe. “The gap for supplying bell peppers to that market is becoming narrower and narrower every year. We are planning on sending some bell peppers to Eastern Europe countries such as the Czech Republic and Poland. There we can still compete. The Spanish are focusing more on Germany, the Netherlands, and Scandinavia.”

Main export product
The main item in the Arava region, where the company’s farmers are located, remains bell peppers. Last season was okay,” says one farmer. “If we have enough quantity, the season is okay. We need to increase our yields. In the Netherlands, you get about 30kg/m2. In Israel, if you are an expert grower, you will get 10kg/m2 at the most. Our season is also much shorter than the Dutch one. Here it is five months. In the Netherlands, it is eleven.”

“The key for us to be more efficient”, he says. “Of course we can heat and do all those things, but it is not cost-effective. It will cost more than we can sell the product for.”

“Competition from Spain is increasing every year”, says another farmer. “Acreage there is increasing every year and they are also extending their seasons every year. Quality has also improved over the last few years.” Root vegetables like carrots, potatoes, and citrus from Turkey and Egypt, on the other hand, are Arava Exports Growers main competition when it comes to citrus and root vegetables such as carrots and potatoes.

“But”, says Ido, “there are no guarantees when it comes to any market, especially for agricultural products. Everything can be good now, and within a week it can all change - because of disease; because of the weather. Who knows what the future will bring.” 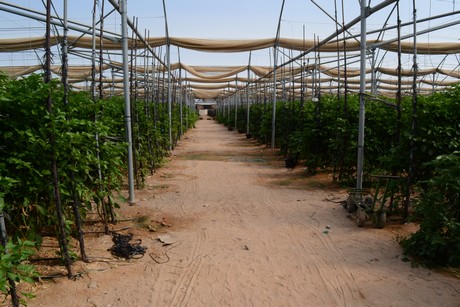 Farmers are struggling
“All I know is, so far, the bell pepper farmers are struggling but surviving. But they keep growing and doing the best job they can. They are always looking for new varieties, new markets, new technologies. They always hope for the best.”

When asked whether it is easy to get enough product for export, Ido says, it is a difficult question to answer. “Since it is agriculture, you always have too much or too little”, he says. “For example, there is plenty of habanero in the market at the moment. But the farmers have plenty. So, they have to harvest it, and we have to sell it.”

“There will come a time; I do not know exactly when, when there will be a shortage of this product again. And we will not have sufficient quantity where, now, we have too much.”

Another issue is the cost of logistics. “This makes up around 25 - 30% of the export costs to Europe. The coming season’s costs will be roughly the same as the last. But it is a part of the production costs. You have to take it into consideration, like everything else”, concludes Ido.