While the Florida tomato production season is already underway, Riehm says crop from the state so far hasn’t been as large as usual. “They’re short due to some weather conditions that occurred a few months ago. Quincy had the hurricane in October and every other week it seems like a cold front comes through.” He notes that temperature wise, there have been many cooler days and nights which affect the maturity level of the tomatoes.

Sizing issues
He’s also noticing some quality issues, particularly in Roma tomatoes from Mexico, a variety which has already been tight on supplies. “And in Florida, sizing has been the issue,” he says. “They haven’t had the big sizes available to the open market. People want extra large and they have to settle for large in combinations. It’s a factor even for the round tomatoes.”

That said, he notes that November and December are traditionally tighter seasons for tomatoes. “This season round tomatoes seem to be the short end. There’s a real shortage of round tomatoes,” he says. “But now Roma tomatoes are becoming more plentiful.” 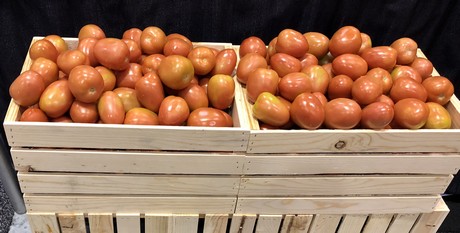 2019 outlook
January of course will be when new growing regions and more availability opens up. “The supply chain is starting to get stronger. Mexico is coming in more,” he says. “And in January, different growing areas in Mexico kick in. Nogales will open up. It’s just getting through December until January.”

All of this makes for strong but steady pricing on tomatoes. “It’s been like this for a few years,” says Riehm. “The last several November-December months have been strong tomato times where pricing is strong.”