"Every time we are surprised by the ideas of our clients"

“Why would you build a greenhouse on a roof in the middle of the city, with all the compromises and investments you have to make? Why not get out of the city, only 10 or 20 kilometers, to have a simple greenhouse with a smaller investment, and it gives the same solution.”

Indoor farming
With the TAP kit, Israeli company Teshuva Agricultural Projects Ltd. enables small farmers who cannot afford to invest one or two million dollars in a big greenhouse. They see themselves as a competitor of indoor farming. “We want to enable people to get into sophisticated farming without getting into big investments, so we are aiming to keep the price low”, says CEO Avner Shohet.

“Containers and other indoor farming ideas are nice, but we believe in a low cost greenhouse, just outside the city will be more efficient. Also, indoor farms like containers needs artificial light which costs energy. Our partner on lighting is the sun. It is providing us with very good conditions, not charging us at all. It seems the produce here is stronger and better than growing in a container, because of the natural light.” 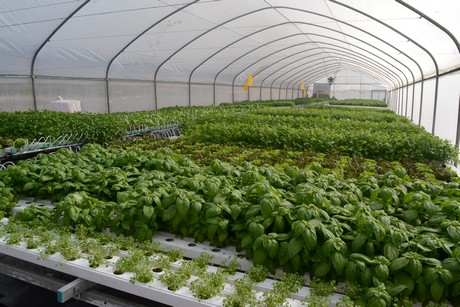 Rapid expansion
Avner shows the greenhouse of one of his clients in Israel, who is growing a mix of lettuce and herbs. “He first started selling to his neighbors, then came the restaurants. They like the fact that they know the grower of the food they serve. They visit him regularly. In this 500 m2 greenhouse he produces 150-200kg a week. He grows by demand, which is the dream of every farmer.”

Currently the grower is supplying to seven restaurants. He supplies them every week so gradually planning is needed. A new unit is planned. “Only two months after the greenhouse was put in production, he came to me saying his clients wanted more production. Some of them are actually willing to support his investment of the second unit, in order for them to secure his supply.” 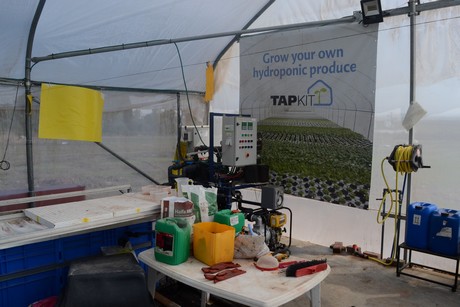 Climate system
To keep a constant climate in the greenhouse, a system of Roots is being used. “The temperature underground is stable and the average of summer and winter. They drill a hole in which they put two pipes, 6 meters deep. In summer we get cold, chilled water to cool down, and in winter it is a little bit warm. It is the perfect temperature year-round.” This climate system is not a must for every client of the TAP kit. “It is a valuable addition for places that have big difference between summer and winter. This month we started building two installations in South Korea. There we use the same system. They have even more extreme temperatures. In summer they reach 40 degrees Celsius, in winter below -15 degrees.”

Profitable solution
In a unit of 500 m2 the production of lettuce is 12 tons a year, or in case of herbs, 6 tons a year. This grower is mixing crops, so his production will be 8 tons a year. His turnover should be around 100- 120,000 euros per year. The cost of the unit, including a small plant nursery and packing equipment, is around 55,000 euros. The preparations for the unit will add another 10,000 – 15,000 euros. The return on investment is 1.5 years. This makes it a profitable solution for growers.”

Three modules
Depending on the climate, TAP provides three different modules. The one that is being used in Israel is suitable for sub-tropical countries. There is also one for tropical areas that has more ventilation. For cold countries double plastic is being used. “This unit will cost 80,000 Euros, because it has a different structure. Every three or four years the plastic has to be replaced, which costs a few hundred Euros. This is still a small investment in comparison to containers with automation and artificial lighting.” 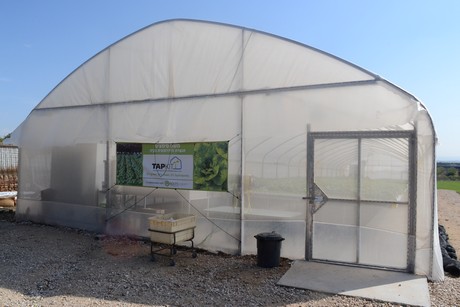 Surprised by clients
When we started, we focused mainly on Africa and South America, thinking: ‘these people don’t have much money and with support of the World Bank they are able to grow in our self-assemble hydroponic greenhouse. But very soon we discovered our market was much bigger than that.

“Our first clients were from South Korea. There is one in the Philippines and 2 units are on the way to a resort in Mauritius. I think here in Israel we can sell a few dozen of them. There is also interest from USA, France, Ecuador, Mozambique and even from Gaza.” Most clients will have one or two TAP kits and they can supply the products to the supermarkets, restaurants and vegetable sellers in their neighborhood. “This way they really answer the need of local produce.” A small part of the greenhouse is usually for propagation.

“A client from Miami is to buy 3 to 5 units, which he aims lease to several people”, says Avner. “Another client from New York wants to put a TAP kit in a home for the  elderly. There will be food for the kitchen and occupation for the people living there. It’s not a hard job. People don’t have to bend down. These are uses that we have never thought of before. Every time we are surprised by the ideas of our clients.”