Day chairman Merijn Doggen during the Westland Event, held on December 7: "Who is already using data in his company?" Almost a quarter of the 700 people present raised their hands. Not a bad score, but the number of active data users has to increase quickly, was the message of the various speakers to the hall full of entrepreneurs, policy makers, and interest representatives from the greenhouse horticulture sector. Data has not been a ballast for a time now, but something valuable if you use it properly. 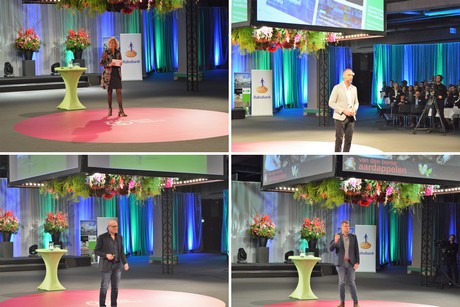 But how do you use the opportunities data offers? An important question, because only by using data properly, the horticulture will be able to keep its top position, emphasized alderman Karin Zwinkels, Economical Affairs and Knowledge & Innovation, during the kick-off of the tenth edition of this annual event organized by Royal FloraHolland. Hammering, but yes, "really sharing is so important", Karin called again to share knowledge. Knowledge about innovations which have been made available online since December 7 at www.westlandhortibusiness.com in interactive chart animations about water, energy, robotics, and data.

After the opening, futurist and trend watcher Richard van Hooijdonk took the word. He stated that, in time, all predictable and repetitive tasks will be robotized, and it is not unimportant for the greenhouse horticulture sector to learn to dance the tango with technology. In between the required generalities in the, by now stale story surrounding container terms such as digitization and robotization, there was also room for interesting insights. His experience that 50% of his listeners would think his story is bullshit, did not stop him telling the hall that 70% of future jobs in a data driven greenhouse horticulture is still unknown. And although another part of his listeners fears this, according to Richard, there is still a small part that in spite of this, want to go for change 100%. If it is up to Richard, this group will expand rapidly, particularly in the greenhouse horticulture sector.

Jack Esseling, announced as the 'data evangelist of IBM, continued Richard's story, and according to him it is necessary to start 'smarting up the speeding' with use of data. After the required onliners, such as 'sharing is the new having', it was time for questions, but they did not come, maybe because both gentlemen have little understanding of the greenhouse horticulture?

It became more concrete during the presentation of Jacob van den Borne. His story about precision agriculture in the potato cultivation touched on the daily greenhouse horticulture practice. Jacob showed how he is working with data on a daily basis, without sitting back and letting everything happen. It is crucial to get onto the field, and to calibrate data, even if new, 'superior' and 'brilliant' systems are available on all sides. Systems that Jacob would first like to test in the daily practice at his company before being really convinced. After some hesitation, the first questions followed Jacobs presentation, although the setting, with bombastic sound and show elements, was not really suited for in-depth analyses. 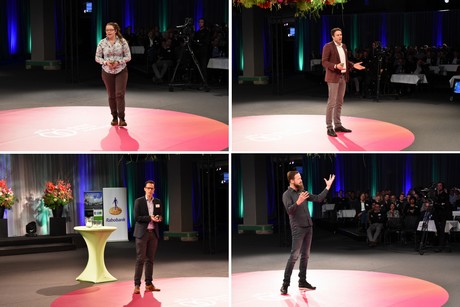 After the break, it was the turn of Gerhard van der Bijl, CDO and CIO at RoyalFloraHolland, to expain how Royal FloraHolland, via the data driven platform Floriday, unleashes algorithms on the data of products for buying and selling. Gerhard also had news, because he announced that the digital infrastructure of the auction will have the opportunity to make data available through apps, in which Royal FloraHolland actively seeks the cooperation with other parties.

Be sweet to the nerds

During the following round of pitches, Gearbox Innovation, in the person of Simone Keijzer, got the change to present itself as a company busy making 'the colleagues of the future'. In Maasbijk they are working hard on robotics and vision technology. Ronald Hoek, AgroEnergy, told in short about the Autonomous Greenhouse Challenge, in which AgroEnergy, together with Delphy, participates as only Dutch company in the finale. Share knowledge, which was also the message of the next pitch of Peter Hendriks, LetsGrow.com, is not really relevant to the challenge. Just hand over Dutch knowledge to tech giants such as Microsoft and Intel is rather frightening. First get some insights ourselves, a step Hillenraad Data Refinery wants to help growers with, because how can you get quickly from overview to insight.

Tech entrepreneur Jim Stolze, as final speaker, really got the audience moving. Questions such as 'Who is a nerd here?' were followed by confirming stamping of the feet. Jim introduced the term algorithmization, because digitization has become obsolete. According to Jim, data should no longer be a side product, but a fully fledged product. A product with which a data scientist, of which there cannot be enough of with a view of the future according to Jim, can work with. That data scientist should have knowledge of greenhouse horticulture, if they want to move the sector forwards. And then, at 17.00, the lights automatically switched off, and the audience burst out laughing at this technological belch. When the lights were on again, Jim could really conclude by calling on everyone to be sweet to nerds, and to realize a real greenhouse horticulture university in the Westland. Work to do, but not before an enjoyable drink. That is also one of the objectives of the event, because real steps are not taken during an afternoon of talking, but in the rest of the year on the work floor.