Harvesting turnips in the snow and mud

Growers braved Winter Storm Bruce in Michigan last weekend as workers continued harvesting turnips. Despite six inches of snow falling from a blizzard the previous night, the workers were out there gathering some of the remaining turnips before freezing weather put a halt to harvesting, likely for the winter.

"We were still harvesting in Michigan on Monday, which is surprising because of all the snow on the ground," said Jordan Bremer of Victory Farms Sales in Hudsonville. "Winter Storm Bruce delivered six inches of snow but that didn't stop workers from harvesting."

Bremer added that this is typical for this time of year and that it's normal for some turnips to remain in the fields. "The ground will likely freeze solid after tonight and we will only resume harvesting if there is a thaw in the next week or so," he said. "Whatever remains in the ground until spring will not be harvested because typically the frost damages the product."

Supplies and market remain steady
Michigan has enjoyed generally good, stable weather since the summer months which has been beneficial to many of the state's root crops. The same can be said for turnips of which there are steady supplies. This comes at a time when the market also picks up in response to the holidays as well as generally higher demand over the winter months. 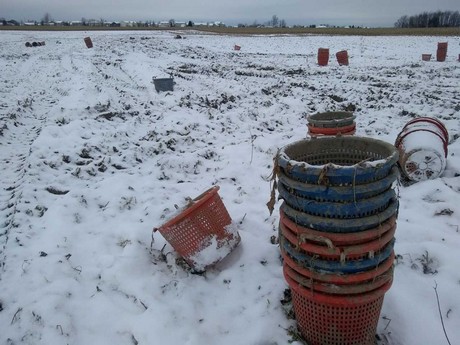 "Supplies of turnips are average and we have not seen particularly high or low production," Bremer observed. "During winter, we see higher demand as more people use the vegetable over these months. Thanksgiving and Christmas are also times when see an increase in demand. The majority of our turnips are sold in 25lb bulk bags."

Wet harvest after dry summer for Quebec growers
Over in Quebec, growers had to deal with wet conditions during their turnip and rutabaga harvest. This was in contrast to the summer where Quebec experienced a drought. Due to the dry conditions, sizing was a little smaller compared with the average, but quality was good overall.

"We have finished our harvest and are now into the storage crop," said Guillaume Henri of G.N.C. Farms. "We had a very dry summer which resulted in a smaller size crop profile, but overall it was good. The harvest was tough with wet conditions and although this did not affect the crop, it made the harvest more difficult."

Henri added that the market is good, providing a good start to the storage crop season. "For storage crop, we are in good shape," he said. "Volume is quite normal but there is not an abundance. We are already seeing a good market, which should only improve as the months continue." 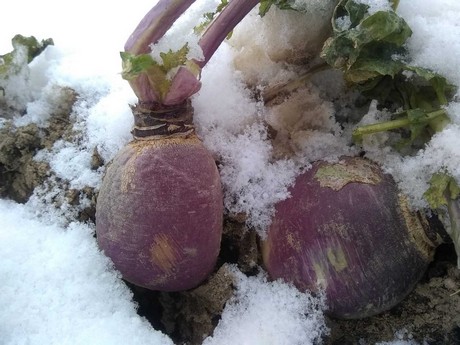 Rutabaga successful
G.N.C. Farms supply both turnips and rutabagas, with the company having a larger availability of the latter. According to Henri, Quebec retailers deal with them a little differently than their US counterparts, in that they do not carry them waxed.

"Rutabagas are the larger vegetable and are generally yellow in color," he explained. "On our farms we do not apply the wax coating as they do in the United States. The reason they do so is they believe it gives the vegetable a longer shelf life. However, we think that plain washed gives a fresher and more natural look than coated ones!"

"Another thing we do differently in Quebec particularly, is that we supply the smaller heads in 5lb bags," Henri continued. "We distribute these in eastern Canada and they have been very successful."