"The cultivation was very successful this year. We were able to do ten kilos per square meter more than in 2017. That means we reached 122 kg/m2, of which 120 kg or 282 cucumbers were class I with an average fruit weight of 425 grams." Speaking is Frank Kempkes of the greenhouse horticulture unit at Wageningen University & Research in late November. He's looking back on the latest campaign in the Winter light greenhouse:

2018 was the second full year in which the Winter Light Greenhouse was tested with the cultivation of cucumbers on high wire. The greenhouse was built in the summer of 2016 with the main goal of providing 10 percent more light in the winter. To achieve this they used larger glass panels (5.6 m hood) and diffuse glass with high light transmission, a special powder coating with extra reflectivity and an extra light-transmitting screen.

42 weeks of continuous harvesting
This year was unique with 42 consecutive weeks of harvesting plants that were planted at the end of December. "Normally a lot of cucumber growers change plants in the middle of the bright summer. These are weeks that you don't really want to miss as a grower, because you're out of production for almost three weeks." By rooting the plants again at the end of April and mid-June, a smoother production was realized. "The expectation was not that re-rooting would immediately produce more kilograms, but in the weeks when crops are normally rotated, about 4.5 to 5 kg was harvested. That lead of 10 extra kilos was not surpassed during the rest of the season in the reference crops, which did have crop rotation. Not even with a younger, fresher crop." 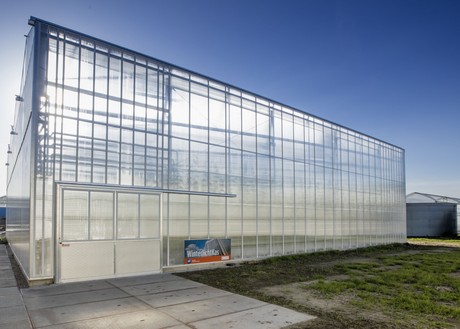 In addition to the higher production, lowering the risk for diseases is another advantage of re-rooting. "When you empty your greenhouse in the middle of the often hot summer, the greenhouse air temperature rises and the greenhouse can grow pythium, for example. By choosing to re-root you avoid that risk moment." There is also a labor advantage, although that's not as easy to quantify. "Re-rooting requires a bit of extra work, but your workload is much more even, just like your production, and runs without major peaks and valleys. On the other hand, a crop rotation is associated with large labor peaks. There is also a strong impression that one long, continuous cultivation has a positive effect on flavor."

Higher yield from test greenhouse
The results from the Winter Light Greenhouse are invariably higher than what growers achieve in practice. "Top growers reach a maximum of 105 to 108 kilograms per year. The gap with our 120 kilos is pretty big." It's a difference that often has been discussed, because where does it come from? Frank has a theory, but there aren't any statistics available to back it up. "Labor is often overlooked in experimental fields, but it is very likely that more attention and time is spent on the crop in a test greenhouse. Cucumber cultivation on the high wire is labor intensive with 250 crop interactions per stem per year. Suppose that 10 percent of these actions have negative consequences for the plant, that is still significant. A bend in the stem, a little damage, leaving too many fruit hanging: all of these things have an effect on the crop. In a test greenhouse you don't have to deal with the same performance pressure that you have in a commercial greenhouse. There you have to balance simplicity of maintenance and maximization of production potential. For example, thinning every other fruit is easier than working with a thinning schedule. While the latter is better for the crop, it's also more difficult to implement."

Full LED in 2019 to further increase winter production
On December 17 the Winter Light Greenhouse will be replenished with new plants. This is very early to be planting cucumber for cultivation on the high wire, but this has a reason. "We are opting for a short crop for 2019, because we want to install complete LED lighting in the summer. Over the winter, we will research the ideal light spectrum, so that after the end of the short crop we can set up the greenhouse with the right lighting in mid-July."

But is artificial lighting in a greenhouse with a focus on extra natural light in the winter not contradictory? "On the one hand, of course it is," Frank agrees. "But now that we succeeded in achieving a significantly higher production with 10% extra light, it's time to take the next step. Our winter production from October to March is higher than in practice, but compared to our total annual production it's not that much. 10% of a little is still a little. With the current trend towards lighting, also in cucumber cultivation, we want to see if we can increase production even more in the winter. The challenge here is to make a greenhouse with lighting profitable." The energy consumption will increase slightly. "This year we used 20 cubic meters of gas per square meter and we bought 10 kilograms of CO2 for a limited CO2 dosing strategy of 100 kilograms per hectare per hour. For a greenhouse with lighting, it's a matter of wait and see."