Fresh is one of the most important drivers behind the growth of supermarkets in the past 12 years. While turnover within supermarkets was 27.3 billion in 2006, it has risen to 38.5 billion in 2018. The contribution of fresh to total turnover is the largest and increased by 4.7%. “The fresh category is changing quicker than ever and is full of opportunities,” says Peter can Pijkeren, FMCG Manager for research bureau IRI during the Nationale Verscongress (National Fresh Congress). Opportunities can mostly be found in the convenience category. 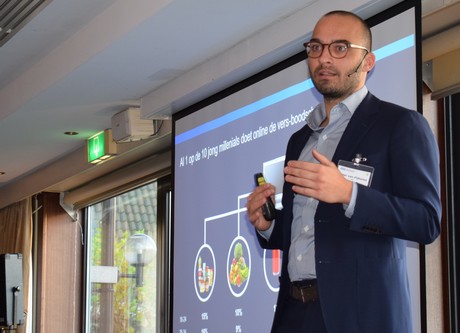 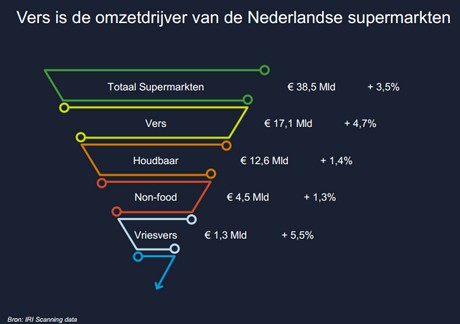 Within convenience, IRI distinguishes between two axes, the removal of mental or of physical effort consumers have to put in. Within this coordinate system, developments are possible. The ultimate convenience, such as ready-made meals, means consumers have to neither think about it nor prepare it. The opposite is the preparation of a meal from scratch. The first has a smaller fresh perception than the second, but that’s also changing due to innovations. Peter: “Pureed soup is a proper example of convenience 2.0. It’s a complete meal with vegetables and herbs. The product doesn’t need to be sliced, it just has to be cooked a bit, and it’s quickly prepared. The quality perception is fantastic, because the consumers know exactly which ingredients are in it.”

Innovations in fresh result in growth. Super convenience is growing by 111 million euro, physical convenience by 133 million and mental convenience by 21 million. All added together, the total segment results in an increase of 265 million. The perception of fresh is becoming increasingly important. Consumers want more local brands and products, and they want qualitatively better products, and flavour, natural appearance and sustainable packaging are important aspects in this. “The continuing plastic discussion therefore requires an even better cooperation between supplier and retailer,” Peter says. “It’s an interesting discussion, because the convenience trends are at odds with the demand for less packaging.” 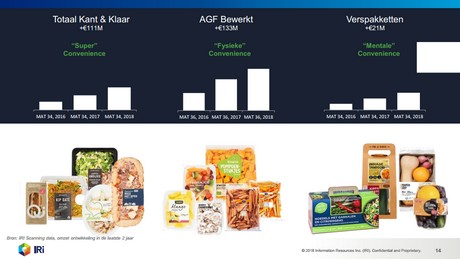 Zooming in on the purchasing behaviour of consumers, figures show that standard routines of consumers appear to be disappearing. Although fruit and vegetables are still mostly bought in supermarkets, this channel is growing less rapidly than online sales. Peter: “Right now, 3% of the total supermarket turnover is online, but because 1 in 10 millennials now do their fresh shopping online, it’s expected that online turnover will start to increase strongly. It’s also remarkable that fresh produce online is 9 to 10% among young people.”