Those who drive onto the property of Johan van Namen in Hoenzadriel, a small village in Gelderland, Netherlands, do not expect to find a vertical farm. Yet in one of the cells no longer are mushrooms being grown, but herbs and micro vegetables. Berjelle van Namen, son of Johan, has started vertical farming with a growth surface of 160 square meter. "The first growth results are positive. The plants are feeling fine, just like me actually."

Preparations for the growth started two years ago. Berjelle, now a fourth year student Business Administration & Agribusiness at the HAS Hogeschool, was doing an internship in Finland in the spring 2017, where he saw a vertical farm, Robbe's Little Garden, where lettuce, herbs, and micro vegetables were grown. "I was made responsible for the optimization of the growth by means of LED-lighting."

Mushrooms as an 'early example'
Vertical farming in Finland was not to be expected, particularly not in a country where the price per square meter is relatively low. "The total growth area of the company was 500 square meter, with the intent of expanding. By growing in layers, the company was able to guarantee an even better product quality, and higher turnovers were achieved."

Berjelle now has the same goal in his own vertical farm. Back in The Netherlands, the plan took shape. End 2017 the moment came, and one of the cells in the mushroom nursery was transformed slowly into a vertical farm. "The mushroom growth could be seen as an early precursor of what is now vertical farming. The racks used for mushroom growing, turned out to be well suited to multi-layer growth."

Growth adjustments
Still, a lot had to be figured out before the first growth could finally start in September. "For example, I have spent a full week on realizing the optimal water dosage. I also worked on the ideal light recipe. Light spectra contain small differences, which do have a surprising effect on the appearance, the taste, and the health of the plant. Ultimately, everything depends on what the grower wants for his product, and for the growth methodology. By now there is a lot of variation worldwide in how vertical farms are constructed. I have underestimated the work involved a little, to be honest. But now the first results are in, I want to continue." 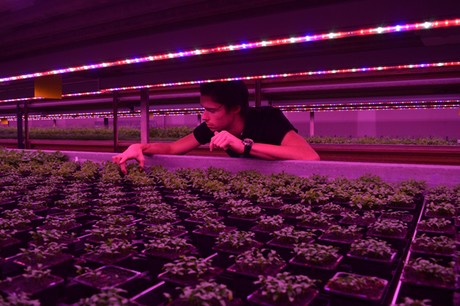 Berjelle hopes to finish his study as soon as possible to spend more time in the 'pink cell'. The software for the cell, in which around 20 herbs and micro vegetables are grown, has been supplied by Green Simplicity of Wessel van Paassen. The lamps are by Hortilux. "CO2, lighting, and irrigation are not required when growing mushrooms. Actually, besides the adjusted settings, I only use the climate control that controls the temperature, just like it did for mushrooms."

Golden mean
From the back to the front, various tests from young to old can be found in the cell. "This growth was a test. Not everything is optimal, but the results are good. Basil of course requires a bit warmer climate, and coriander a bit cooler on the other hand, but in one cell you have to choose the golden mean, make compromises. That went okay, I think."

Berjelle bought the seeds for the herbs and the micro vegetables at Enza Zaden. He preferred the lesser known herbs, such as lavas, savory, and pizza herbs, but also the more known types such as thyme and parsley grow under the red glow. "Ultimately, with especially bred seeds for vertical farming, much more profit can be made, I expect."

Farming with a sustainable and healthy product
But before you are ready, you can already continue fine tuning. The ultimate goal of Van Namen Specialties, as Berjelle wants to call his young project, is expansion to multiple cells. "At first I think of a warm and a cooler cell. Still, the herbs and micro vegetables are already of good quality without special climate adjustments."

Berjelle will be soon starting his first harvest. "I am going to try to sell the herbs and micro herbs to local shops, and I will offer my products to clients I already know from the mushroom trade, whom I can offer something extra. The beauty of vertical farming is that it exudes sustainability. You do not need heat, because the lamps already give off sufficient heat. And the electricity for the lighting is generated by the solar panels on the roof of the nursery."

But Berjelle does not only want to distinguish himself on sustainability. "I have much faith in research that shows that vegetables and herbs from multi-layer growth contains more anti-oxidants."