"We know a lot more than we did a year ago, but for every answer we find there's three more questions popping up"

Only a year ago the last tomatoes of the season were being harvested out of the Village Farms Delta greenhouse. Nowadays it's a completely different view: the complex is retrofitted and cannabis plants are blooming. On the Advanced Cannabis Cultivation Technology Summit (ACT Summit), organised a day prior to the MJBizCon, Paul Selina with Village Farms spoke on the retrofitting process and the learning curve they're experiencing nowadays. "We know a lot more than we did a year ago, but for every answer we find there's three more questions popping op." 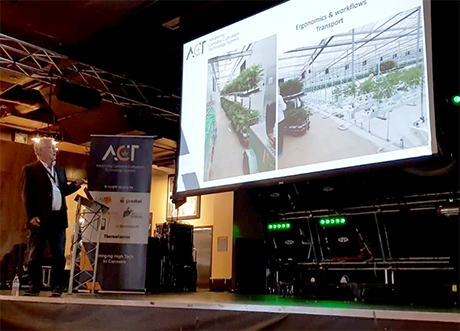 Cannabis week
It's all about cannabis this week in Las Vegas. The MJBizCon, that started yesterday, hosts over 1,000 exhibitors and is expected to attract double the amount of visitors compared to last year. The day before the exhibition the ACT Summit was hosted by Gavita, Grodan, Meteor Systems, Priva, Svensson and Thermo Energy. The full day event focusses on educating growers, owners & investors from the cannabis industry.

This year Paul Selina with Village Farms was one of the key speakers. Last year the company formed a joint venture with Emerald Health Therapeutics: Pure Sunfarms. This year they've harvested and sold the first marijuana out of the Delta greenhouses that were being used to grow tomatoes before. Paul explained how, other than in tomato or most other crops, there's currently no standard production method for cannabis and how they're learning day by day what works and what doesn't. 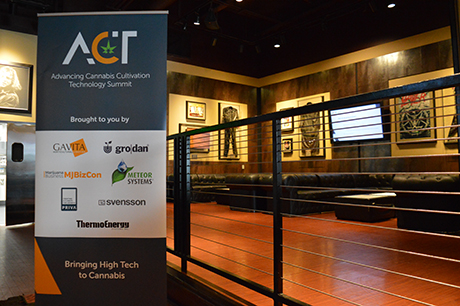 The 1.1 million sq ft farm currently is divided into 17 separate growrooms and optimised for no less than 85 harvests per year. By doing so, the VF organisation wants to have teams working year-round and specialising in certain activities. "A regular harvest creates routines."

With this schedule as a set point, the choices are made for the retrofitting process. The heating pipes in the greenhouse are still being used for the carts transporting the product. Just as it was in the tomato greenhouse, gutters and a support system are being used - optimised for the cannabis crop that is. Also the labour registration system being used in the greenhouse before comes in handy: it helps with the labour and also with gaining data on the crop performance, an important topic to the company.

"Since we will be working with 5 times the number of people nowadays compared to the tomato farm, we also use the labor registration system to give feedback to employees on the quality of the crop work." With a 400 mmol lighting recipe, the last pieces are put together to create an ongoing growing and harvesting schedule. 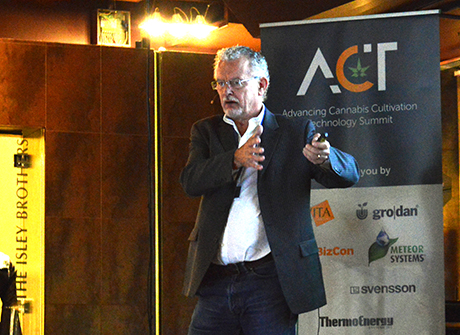 Growing and knowing
With cannabis being a new crop to high-tech and large scale greenhouse growers and Pure Sunfarms one of the first operating on this scale, gaining knowledge is majorly important in the industry. As Paul explains, it's an ongoing learning process. "We know a lot about greenhouse growing. We know about propagating, scouting, a homogenous climate, growing without fungicides available. Also we have the infrastructure available: irrigation systems, nutrition tools, steering and measurement tools. But what we don't have for example is the knowledge on what to measure exact on a cannabis crop. We know from tomatoes how to define the respiration and the stress a plant experiences - but we do not know this for marijuana yet. That's one of the things we're finding out."

And there's more to be learned. "With many options we wonder whether if it 'is a thing' in marijuana cultivation. I'm up for discussion and sharing insights about it. Steering a plant vegetative or generative for example, or keeping the air moving in the head of the plant, or deleaving aggressively before harvest. Is it relevant in MJ farming? We're discovering new insights every day. For example we've seen a relative humidity of 75% not being a problem, whilst it was believed at first you could not go higher than 60%. Also the size of the containers seems to be not as relevant as we assumed they were." He explains how the learning curve is accumulating. "For every answer we find, we also find three more questions", he laughs. "But it's a curve - and altogether we know a lot more than we did last year."