Following demand from organic crop growers, Tomsystem has launched a new clip suitable for tying organic crops such as tomatoes, cucumbers and sweet peppers. This new non-galvanized clip has been tested by Bio Gemuse Wagner in Germany with extremely positive results.

Tomsystem, manufactured by Agrifast, is a relatively new tying system for greenhouse crops. Tomsystem is an alternative to the traditional method such as plastic clips using galvanized metal clips to tie the plant to the twine.  "It is more productive, even considered the most efficient tying system in the world", the team proudly explains. "The main advantages of this new and innovative system are increased efficiency and a reduction of labour. Since the clip is degradable, the recycling costs are low."

Since its launch in 2012, the Tomsystem tying tool is currently being used in over 30 countries across the world. 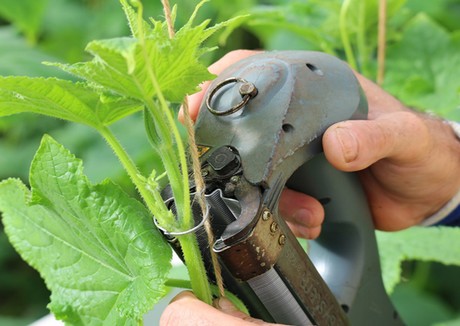 Bio Gemuse Wagner
Bio Gemuse Wagner is a company based in Southern Germany, with three greenhouse facilities. Two are located in Aach (3 hectares) and Reichenau (2 hectares), in the area of Constanz lake
The latest,  located in Mühlingen, was built in 2017 and in February 2018 the first plants arrived 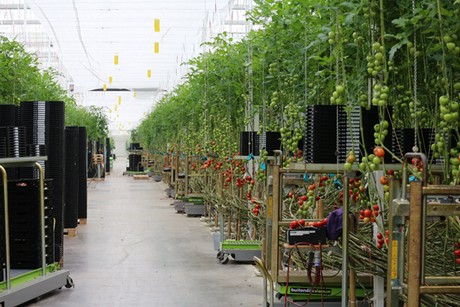 Central corridor of the greenhouse

4 hectare
The 4-hectare greenhouse is a state-of-the-art installation, with glass cover, heating, CO2 dosing system and electric trolleys. The warehouse is equipped with sorting machines, flow-pack packaging machines, loading platforms for trucks and facilities for the workers. 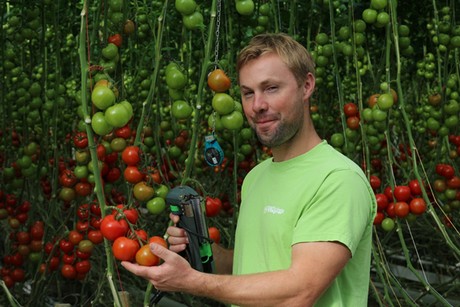 Benjamin Wagner, owner of the company

Unique tying system
Being a completely new greenhouse with new workers, all the tasks related to growing the crops had to be organized well and tying the plants was an important issue. “We wanted to have a unique tying system for the 3 crops, and the Tomsystem was the only possibility” explains Benjamin Wagner, founder and owner of the company. “We contacted the manufacturer, Agrifast, as we were interested in using Tomsystem, but as we grow organic produce, we did not want to use the standard V46 galvanized clips” 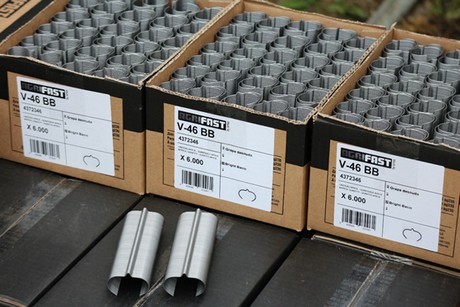 Boxes of Agrifast V46 BB clips. Each box contains 60 strips of 100 clip each

V46 BB
Benjamin then contacted Agrifast to ask for a possible solution. “Agrifast explained that they had just finished the development of a new clip for organic growers, the V46 BB, which was basically the same design but without the galvanized coating, and so we decided to use it in our first year in Mühlingen” adds Benjamin Wagner. 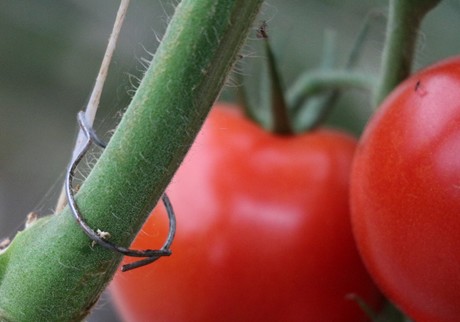 Detail of a V46 BB clip on a tomato plant.

Galvanized coating
This way, Agrifast also had the opportunity to test  the new clip during a complete growing season. “For us, it was both a necessity but also a challenge to see how the new clip performed in a humid atmosphere like a greenhouse” explains Alberto Lizarraga, product manager of Tomsystem when Benjamin Wagner asked Agrifast to test the suitability of the clip for use in their new greenhouse
In fact, the galvanized coating of the standard V46 clips is applied to avoid corrosion, so removing such a defense against rusting could affect the performance of the clip and that was why it was important to test it during a complete season. 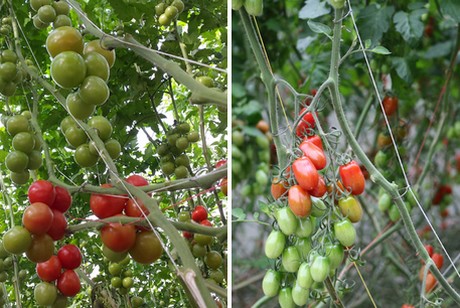 Left: the clips of the Tomsystem can bear the weight of heavy tomato plants like the ones in this picture (variety: Tomaranto, from RZ). Right: Dunne tomatoes (Syngenta), tied with V46 BB clips

No corrosion
The new clip might not be considered as attractive as it lacks the shine of its sister, the standard V46 galvanized clip, but it had not suffered any corrosion after  seven months in the greenhouse, so we can safely say it is suitable to be used in greenhouses “It is darker than the galvanized clip and gets dirtier, but apart from this visual difference, the performance is the same”, points out Agrifast.

Another advantage of testing the new clip was that Bio Gemuse Wagner grows the three main crops for which the Tomsystem is used worldwide: tomatoes, sweet peppers and cucumbers. 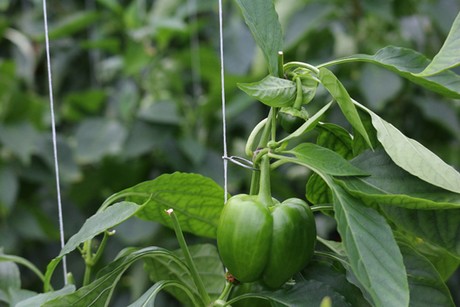 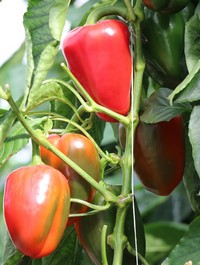 Of course, even if the tying system and clips are the same, the way they are used depends on the crop.

Clipping sweet tomatoes is the most challenging  as the clip has to be placed in the correct internode position to avoid damaging the fruit. However, pepper plants do not grow as fast as tomatoes and cucumbers, so it is not necessary to clip every week. Depending on the variety and growing conditions, clipping every 10-15 days is sufficient. 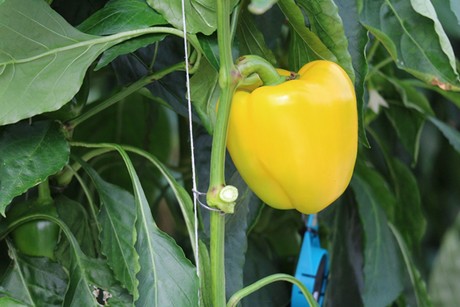 On the other hand, clipping cucumbers is much easier, as the crop canopy is less dense making it quicker and easier to find the correct place for the clip.

The clipping speed in cucumbers can be as fast as 2000 plants per hour. 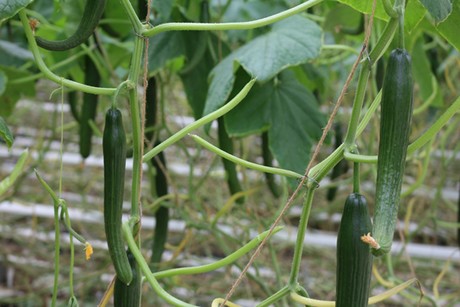 The V46 BB staple has a diameter of 21 mm (as has the standard V46 galvanized clip), and that is why some cucumber growers think it is too big. “During the first tests with the Tomsystem in cucumbers 4 years ago, the growers wanted to have a 14 mm metal clip, as this was what they were used to. However, after many tests, in the end we managed to show them that the 21 mm metal clip is suitable for them, and most importantly, the crop does not suffer any 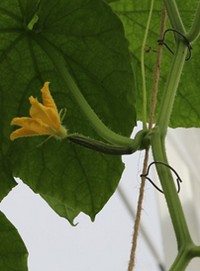 damage and of course, it does not fall!”, explains Alberto Lizarraga

In cucumbers, Bio Gemuse Wagner uses bio-twines, so plastic is avoided completely. As the bio-twine is thicker, it is necessary to regulate the closing of the clips, to prevent cutting the twine.

Cucumber plants grow faster than tomatoes and sweet peppers, so clipping is done every 3-4 days 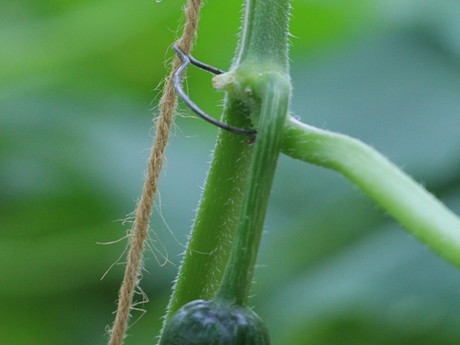 Detail of the clip on a cucumber plant

The Tomsystem clipping tool has 5 different closing positions, making it possible to adjust the grasp of the clip depending on its thickness and weight of the crop.

Position 3 is the standard one and suitable for most of the crops. For thin plastic twines (1200-1500 kg/m), it is necessary to use position 4 or even 5, so the clip has a tighter fit. However, for thick plastic twines (1000 m/kg), used mainly in beef and big trust tomatoes, and bio twines, position 2 and 1 are the most suitable, as the clip does not close as much. These positions can easily be adjusted using the trigger of the tool 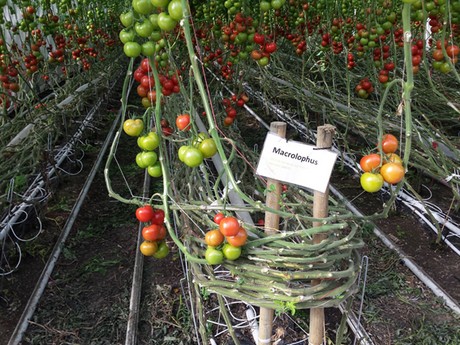 More than tying the crop
Of course, growing organic produce is much more than just tying the crop, as Ramona Sarb, crop manager of the company points out. Firstly, growing in soil means that calculating the irrigation scheduling is more complex, as it’s not possible to control all the parameters of the drainage, like you can in hydroponics (electrical conductivity, pH and drainage volume). Apart of that, the soil is not as regular as a hydroponic substrate (like rockwool or perlite)

As well as this, it is very important to control the pests with natural enemies, such as Macrolophus Caliginosus (a species of true bug in the family Miridae), used to control white flies, among other insects. “Instead of killing the pests with chemical products, we introduce their natural enemies, so they can control the population of the pests” explains Ramona. In this way, the produce is healthier for the consumer. 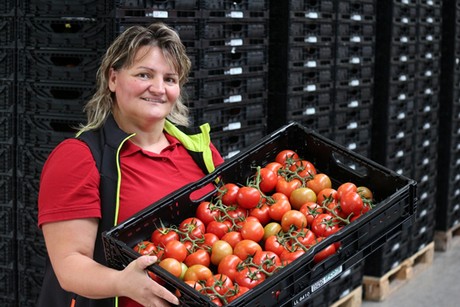 “This season was good in terms of production and prices and we hope to have an even better one next year” summarizes Ramona Sarb. The produce is sold locally in Southern Germany and this proximity has a positive effect on the quality when compared to products coming from thousands of kilometers away.

The initial results conducted by Bio Gemuse Wagner clearly show that the Tomsystem together with the new non-galvanized V46 BB clip is perfectly suited for growing organic tomatoes, sweet peppers and cucumbers as it is a true alternative to plastic clips in organic crops.
Since its launch in 2012, the Tomsystem tying tool is currently used in over 30 countries across the world.