"I will keep telling the story of horticulture, a hundred times a day"

Crop change is here, also for Ton Janssen. It will be his last as tomato grower, because as of November 12 he is grower no more. Recently he sold his own cultivation company, 2.6 ha in size. In week 45 the last harvest will take place. "At the moment we have a super beautiful garden of tomatoes. The vines are so beautiful, quite the picture. This way, we end in a fantastic way, after what has been a rather disappointing season." 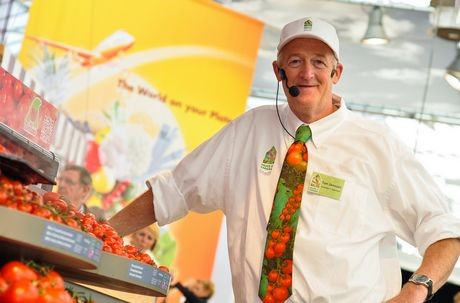 The greenhouse will be taken over by breeder Bejo Zaden, who will start with production of asparagus seeds. "They are facing an enormous challenge before planting can start in March. The cultivation change is less intensive for us than usual."

Is there something you will miss the most?
"The Sunday morning quite round of the greenhouse together with my wife. Together on the electro cart for a nice drive, we always used to do that. I will miss that." 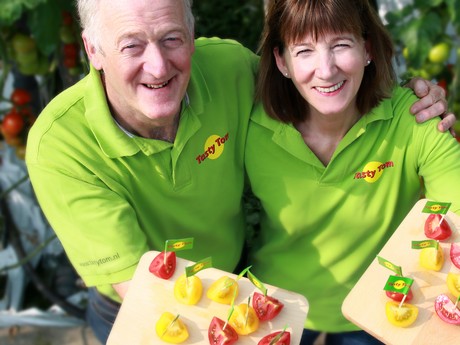 Take us back in time
"My grandpa was a gardener, my father had to be a gardener, he did not have another option back then. I never wanted any different. I always wanted to be gardener and always thought it was great. After finishing the Middelbare Tuinbouwschool, I went for an internship in various countries and the Westland. I learned to grow tomatoes there. When I came back I said to my father: we are going to grow tomatoes. That was in 1976. Until that moment we never had grown tomatoes. My father then said: we are going to grow beefsteak tomatoes. We were, under guarantee of the Central Bureau of Horticultural auctions, the first in The Netherlands."

Together with the Verbeek and Vereijken brothers, and later on other growers, Tasty Tom was built up from the ground, and now it is an established name. Ton will keep being involved in Tasty Tom, even when he has stopped as a grower. “ I will be active between 10 and 20 hours per week for Tasty Tom. I will conduct variety tests. I will also do taste tests and PR-work. That will even be a little more. Actually, only the nice things remain. Administrative tasks such as the LLBT or Veiling ZON were never my cup of tea. Others did that, who did not like my job.”

What has been the biggest change in all these years?
“First of all, rock wool, it is a big change still. Secondly, and maybe even a bigger change, bumblebees. That was a sensation in the sector! In one go you could stop shaking the greenhouse, three times a week. Rock wool increased productions, and bumblebees added to that.

What will never change is energy. Buying gas and selling gas, buying  and selling electricity, I loved that. A great game in hindsight, and I was pretty good at it. You have to pay attention always, look for the 50% line, but you also have to have a bit of luck. It is unpredictable, and can go up or down like the stock exchange. I learned over the years how to deal with that.”

And future challenges?
“What I think is important now, and in the future, is personnel. Challenge number 1 in my view, a mega challenge, because how are you going to do that? I have always worked with a small group of people and 40 to 50 students, all my life. My wife and I enjoyed that, had fun. There was always something, a party, re-exams, but of the 50 students, 40 always showed up. Usually I had people from Venlo. I have been able t tell my story in dialect pretty often”.

Does it help being a small company in comparison?
“Yes, of course. Two years ago the whole Tasty Tom club went t Germany, visiting a bell pepper grower with 5 ha, who asked at a given moment: who is that guy who does so much PR work and is also tomato grower? That was me, of course. He then asked the size f my greenhouse. “Ich habe nur 2,6 hectare”, I responded. He then called: you are growing in a telephone booth! A joke I have heard repeatedly afterwards from colleagues. I never wanted to be bigger. I wanted to be a gardener, have never hated the activities in the greenhouse, but at some point I rolled into the PR-world. Since then I have become more and more an entrepreneur besides grower, and I started planning, organizing, and arranging more.”

Crucial to that turn around was the Wasserbombe crisis in the middle of the nineties. How do you look back to that?

"Last week we had a goodbye party and a reunion. We have had a fantastic party. During the party I have also shown the clip from the German television (here 12.25 - 13.40). If I see it now, I just get goosebumps. We (Ton was there together with Arnol Sweep and Eric Truffino, CBT, because he was asked as one of the few Dutch growers that speaks German well) were ferociously attacked. I defended the Dutch product with all my heart, in my typical way. The broadcast in August 1994 has really changed my life from one day to the other. It was a real eye opener. I also had that role of promoter in me. I like it even more than being a gardener. During the Grüne Woche i like to, even a hundred times a day, tell the story of the Dutch horticulture. I start speaking to five people, and slowly the crowd grows. And when people who missed the beginning asked what they missed, I tell it again, with love. The story of the Dutch horticulture, with bumblebees and rock wool is completely new to them." 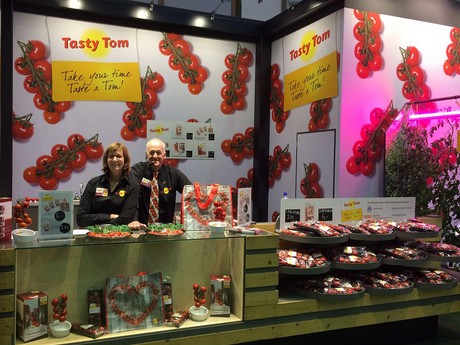 The crisis also changed the tomato growth
"That crisis made me realize that something really had to change. Although I had a garden full of tomatoes-on-the-vine, we quickly went looking for an even better tasting tomato."

Tasty Tom has been around for 23 years now. Is there an even better tasting tomato coming?

"It's really crazy we have been growing the same variety for years, but we will only switch to another variety when we have found an even better tasting tomato. We have not found that variety. I will keep on looking for it in the variety and taste tests."

The tomato supply is much more diverse when compared to the time of the Wasserbombe crisis
"There used to be beefsteak tomatoes, tomatoes, and cherry tomatoes. Now there are many more, maybe fifty or more, different varieties, It is up to the consumer to chose their tomato from all those varieties. That could be a taste tomato grown for 10 euro per kilo, but you might as well chose for a tomato grown for a much lower price per kilo. You cannot just compare a beefsteak tomato and a snack tomato. It is too bad that in the program De Keuringsdienst van Waarde pushed the sector, to my feeling, into a certain direction, in spite of the agreements made. We are now growing tomatoes with a brix from 3 to 13, that is great isn't it. We have given the consumer an enormous choice."

If it is up to Ton, he will keep on being active as a promoter. "I will keep on doing this as long as my health permits. But I will also enjoy life, do more fun things with the grandchildren. I have been away a lot. And even now, when I babysit every Tuesday, I have been often away. Even this year. A few more days, and then I will be there every Tuesday. I am certainly looking forward to that."