Expanding to six varieties and plenty of choice in each segment

In the shadow of the extensive 2,500 square meter new seed warehouse and office complex that opened at the beginning of September, the demo fields at Pop Vriend Seeds were ready for visitors from all over the world. On Tuesday, 25 September a sizable crowd congregated on the premises of Pop Vriend Seeds to learn more during the Demo Days event. Kim Gieling, responsible for marketing and communication at the breeding and family business, took us to the fields between organizing a pub quiz. Pub quiz? "Yes, actually a Pop Quiz", laughs Kim. "Shortly after the open days we take all the staff into the fields to ask them all kinds of fun questions." 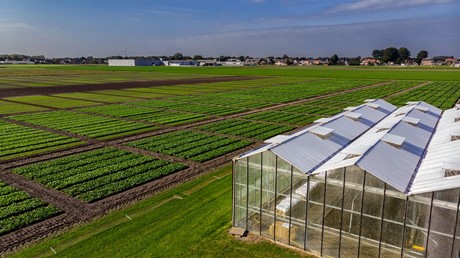 Spinach fields next to the greenhouse and in the background the extensive seed warehouse. Photo: Costas Ganasos Photography

Today no pop quiz questions, but, as soon as the boots are on, a tour through the fields. At Pop Vriend Seeds the focus is on five crops, soon expanding to six. "Besides spinach F1, chard F1, beetroot F1, beans and sweet corn F1 we are working on carrot F1. We notice that there is a great demand for this from the entire sector. The first commercial varieties will take some time, but it's nice to show the visitors how far we've gotten."

Versatile spinach
A visit to Pop Vriend Seeds is not possible without seeing their spinach, as the company is the world market leader of this healthy green vegetable. "There are actually three markets for spinach," says Kim. "For the fresh market we have a wide range of baby leaves. Spinach is popular in salad in the United States, where it is seen there as superfood. Also in a mix with chard for color variety is common.” The chard PV-9022 is Pop's newest addition. "This variety has a high intermediate resistance to downy mildew and has a dark red leaf stem that contrasts nicely with the shiny, dark green leaves."

In the Netherlands and elsewhere in Europe, spinach is mainly used for warm dinner courses. "But also here spinach is grown for raw vegetables and the product can also be found in the supermarket in bags and mixed as a salad." The choice between different varieties for all seasons in this segment is wide, with varieties distinguished with smooth leaves or just savoy, puckered leaves. "The advantage here is that leaves don't stick together as quickly in bags." Resistances are also important. "For all seasons we have varieties with resistance against downy mildew up to and including physio 17, the most recent one." 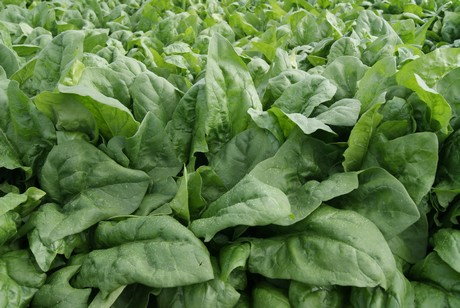 Spinazieras Sonoma for the processing industry

For the Asian market, a second important market, large leaves are important. "They eat spinach, for example, as a wok dish, where they bind 10 complete plants of about 30 centimeters to sell them on the market."

Large, but especially many leaves are also important for the deep-freeze industry. An extra challenge for this market is to get as large a leaf as possible, but not a shoot. Very productive varieties for this market are Sonoma, La Paz (PV-1237) and Santa Cruz (PV-1302)."

Actresses
From the Popeye vegetable to the American actresses, i.e. the red beet varieties Jolie and Scarlett. "With red beet we focus mainly on the fresh market. Jolie is a uniform beet for spring sowing with strong leaves that are easy to harvest until the end of the season. The high brix ensures that the variety has a good storage life. Just like Scarlett, our latest introduction, which has an improved, round shape and, besides an equally improved quality, is also a very balanced plant."

String bean mill
Beans were also not absent on the fields. As early as the 1950s, Pop started trading in this segment. 62 years later there is still plenty of development, both for fresh market and industry use. Here too there are three markets. In the dwarf beans segment, Pop has the typical green beans as we know them in the Netherlands, along with narrower varieties that pass for green beans in France. For the American market they have longer, thicker and darker green varieties. "A bean that is suitable for both the fresh and industrial markets is Pickright. Pickright harvests very easily, 90% without stalk where the pod doesn't break off and neatly releases. This makes the storage life strong and the bean easy to process." 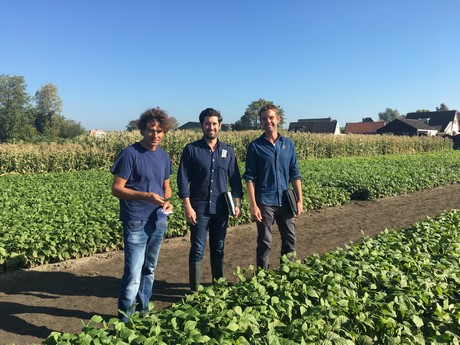 In addition to dwarf beans, there are also wax beans, yellow in color and in various thicknesses, lengths and color variations on the field. "Both in Belgium and in Eastern Europe, this bean is widely grown for the industry." Finally, the French bean should of course not be forgotten. "Here too, we do more and more cultivation for the processing industry, but Grandmother's French bean mill has fallen out of favor. Many products in the supermarket are now pre-cut in the fresh and freezer sections. However, there is still variation. In Spain, for example, they want longer pieces of 1-2 centimeters extra and the haricot in the Netherlands is cut much finer."

Sweet corn
At the end of the field tour it is time for a bite of sweetcorn. Here grow the variety Royalty and the variety Noa. "Royalty is a strong variety for all conditions and are particularly popular with the processing industry in Eastern Europe. Noa is one of the most popular varieties in the sweeter segment, both for the industry and the fresh market."