This past Friday and Saturday, PMA’s annual Fresh Summit trade show was held at the Orange County Convention Center in Orlando. The show attracted a record number of over 1,200 exhibitors, and according to PMA’s CEO Cathy Burns, the show increasingly attracts exhibitors from outside North America. In addition to the US and Canada, countries like Mexico, Chile, Argentina and the Netherlands were represented with their own pavilions. We visited both greenhouse growers and their suppliers and made a horticultural photo report. 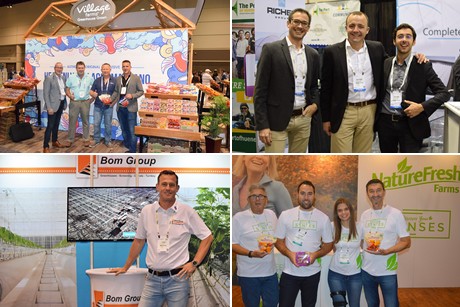 The exhibition traditionally is the meeting place for the fresh produce trading industry and is known for the many packaging novelties being presented. Over the last couple of years more and more greenhouse growers have found their way to the exhibition, of course with the suppliers in their wake.

It was a busy and good atmosphere at the show. Usually, a two-day show sees the large majority of visitors on the first day, but that didn’t seem the case with Fresh Summit this year. There were many people in attendance on both days, resulting in happy exhibitors. Although Fresh Summit seems to attract more grower attendees than any other North American produce trade show, exhibitors were also content about the retail buyers who attended the show. “We are very pleased with the retail support over the past two days,” says Mike Preacher with Domex Superfresh Growers. “We saw all retailers we wanted to see and there is a really good level of energy this year.”

Higher value products
Traditionally, companies use the Fresh Summit to announce organizational news or launch a new product. Noticeable this year was the number of product re-brands as well as complete company re-branding with a new logo and booth. New products were introduced as well, but for the most part they seemed to be extensions of already existing products to create higher-value offerings for the consumer. This includes adding a smaller or larger packaging option to a product that was already available. Also, products are increasingly complemented with dips, such as a cheesecake flavored dip in a strawberry clamshell. The organic category continues to grow with companies increasingly extending their existing offerings with an organic alternative. Within the packaging segment, top seal and resealable top seal continue to gain ground. This type of packaging has a clean look, but also reduces the use of plastic.

Horticultural suppliers
Over the last year more floral suppliers have found their way to the PMA. Our FloralDaily colleagues also paid a visit to them. Click here for the photo report.