“Watercress power food for all seasons”

Things are calm for Sint-Lucie at the moment, after the watercress fields were flooded last June. “We had to clear everything before re-sowing at the time, and that kept us busy. Fortunately, we’re spread across Haspengouw, Belgium, with our seven nurseries, and nature was kind enough not to flood all seven places at the same time. Because of this, we managed to provide our customers with watercress at all times,” says Frank Vansimpsen of Sint-Lucie. Demand for watercress is currently fairly stable. “Throughout the year, we have our permanent customers, so that our volume always stays more or less the same. Although we have noticed peaks when famous TV chefs use our watercress to prepare a delicious meal. However, this isn’t a structural increase.” 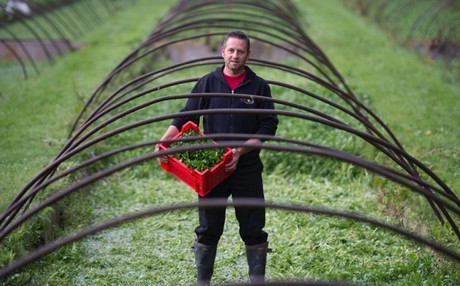 Watercress region
Sint-Lucie is currently the largest watercress production company in Belgium. “Right now, there are seven or eight other companies that grow watercress in Belgium, and we haven’t seen any new companies joining this list. We can pretty much call Haspengouw the watercress region, because we are joined by two other watercress companies in the village. It’s very possible that the production will have died out in 15 years, because most of these companies are passed down from father to son or daughter. Hardly any new growers join us,” Frank says. The UK and France are the biggest countries regarding consumption and production of watercress. “While we have a total production surface of about 2.5 hectares, the smallest nurseries in the UK are between 10 and 15 hectares. In winter, these get additional volume from Miami, Spain and Portugal to meet demand.”

Open farm days
The grower wasn’t much affected by the dry weather. “Watercress is a vegetable that can withstand various climates. During temperatures of 35 degrees Celsius, we noticed the leaves were under some stress, but they survived. Watercress is grown in fresh spring water in any case, so they never dried out completely,” Frank says. “This summer, we did some fun stuff for children as well. In Belgium, we have country classes, so that schools can be introduced to the agrarian sector. About 400 children were introduced to watercress and its production. Children are the future, and we did our best to tell them about watercress in such a way they’d be interested. In the end, they all went back to their mothers to tell them to use the healthiest vegetable in world a bit more.”