Whether red, green, yellow, bell or pointed, peppers are grown worldwide. Depending on the country, the product remains on the domestic market or is mostly exported to neighboring countries. In Europe, the supply is shifting. The season is coming to an end in Northern Europe, while the first shipments from Southern Europe are already on the shelves. In the US, too, people are waiting for the shift in the supply. In a few weeks, the harvest will start in Arizona, where a larger harvest is expected. 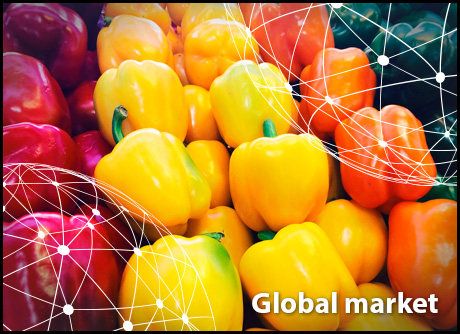 Good summer for German peppers
Unlike many other fruits and vegetables, peppers have had a good summer. A German grower says that "of course, it was hot, but since peppers are grown in greenhouses, they were hardly affected. We can block the sunlight, and thanks to irrigation, we don't rely on the rain. "The number of hours of sunshine and the temperature have been good for this grower and he suffered very few problems with diseases. "Some peppers got burn marks, but only an insignificant share of the production was affected by this." At the moment, the prices are low due to the small demand.

Pointed peppers have seen their market share grow compared to bell peppers, and in general, there is a trend favoring smaller vegetables. Snack vegetables are doing especially well. "The local is very important and regional pointed peppers do well against imported peppers from, for example, the Netherlands. Pointed peppers are becoming increasingly popular because most varieties are sweeter."

Snack peppers are an interesting product for growers, but in some parts of Germany the market is saturated. That is why some growers have decided not to plant these varieties.

Benelux: Southern supply is increasing; sufficient domestic supply up to week 44
The season for the Belgian and Dutch products is slowly coming to an end. The supply from the south is already well under way. At several supermarkets, there is already Spanish product on the shelves. Thus, when selling on the German market, it is certainly difficult to get good prices due to strong Spanish competition. The quality of imported peppers is good, depending on the time passing between their harvest and them reaching the shelves. The prospects for the Spanish production are positive. The weather is now favorable, but that could change very quickly. For now, no problems are expected.

The domestic production is now widely available. The market is currently stable, after a price peak in early September. For Royal ZON, the price of yellow peppers has stood out the most halfway through week 41, standing at around 1 Euro. The prices of red and orange peppers stand below. At the auctions affiliated with the Federation of Belgian Horticultural Cooperatives, the average prices of green peppers were the highest in week 40, reaching 96 cents, while red peppers were the cheapest, with 71 cents. No prices "to write home about," according to a trader, but "for the time of the year, sales are still going well."

From week 44, there is traditionally less domestic product on the market. In general, "the season has not been great" for Belgian and Dutch products. The hot summer meant that there were a lot of discards, resulting in a relatively low share of class 1 products. The product's weight also tended to be low in the summer, which meant that the heavier peppers reached the best prices.

"Peppers need a boost in Belgium"
The end of the pepper harvest is in sight; it will continue for another two to three weeks. The situation in the pepper sector has been far from ideal this year. There have been ups and downs throughout the season. It has not been bad for the entire period, but the overall balance isn't good. The companies have done a lot to try giving peppers a boost, for example, by packing them in different formats and betting on pointed peppers and hot peppers. Managing to innovate with peppers requires some testing.

Italy is facing competition in the Netherlands and Spain
As is the case with tomatoes, peppers are in demand all year round. In addition to domestic production, there are also imports from Spain and the Netherlands. These countries mainly supply bell peppers, which differ from the more traditional Italian elongated varieties (Lamuyo).

No peaks or lows have been recorded during the pepper season at the Caserta region. A grower says that "since the start of the season, the market has been calm and there have been no major price increases. The product was not missed, despite the fact that the start of the season was delayed by a week." According to the growers, the Lamuyo is the most popular among consumers. "We focus on the domestic market, but at the beginning of the season there was a good demand for green peppers from other countries."

A wholesaler in central Italy adds that the peppers have "seen virtually no price changes." In the summer, the Italian production (class 1) yielded 1 to 1.50 Euro on the wholesale market. In the winter, the price can go up to 1.50 to 2 Euro. Another trader has a clear preference. "I do not like the Dutch product, which is as good as tasteless. The Spanish peppers are better than the Dutch ones. "If Italian produce is available, this trader would rather spend his money on Italian peppers. Venetian peppers are being sold for 1.30 to 1.50 Euro per kilo.

Tomato growers in Arizona opt for sweet peppers
A trader tells us about the switch to Mexican peppers. Currently, the supply from this country is smaller than normal due to the unusually bad weather. "The weather has been bad across Mexico and it seems that it will stay that way for the time being," says the trader. The central parts of the country have had a lot more rain than normal and the humidity is higher. That results in quality problems.

The local campaign in Arizona starts in six to eight weeks. "I hear that many growers are planting more green peppers this year," says a trader. They are growers who are turning their backs on the saturated Roma tomato market and are opting for sweet peppers or cucumbers. At the same time, the demand for the peppers is strong.

Unsurprisingly, the price has increased. "On average, prices are probably about $ 2 higher," reports a trader. The price fluctuated a month ago for unexplained reasons. The price is expected to remain stable in the coming period. "I expect a good market with good demand," says a trader. "The prices will remain stable in the next six weeks, but I expect them to change by the end of November and early December."

Mexico: Peppers are a strategic export product
The North American country is in the top three of the world's largest exporters of regular and chilli peppers. Consequently, these products are considered strategic crops for the Ministry's National Agricultural Planning 2017-2030. "International demand has increased in twenty countries in America, Asia and Europe and also in countries where Mexico does not have a free trade agreement. That makes our country one of the biggest international competitors. "Almost a third of the total harvest is exported and the country has a solid position in countries such as the US, Canada and Guatemala. In 2017, the country exported 150,304 tons worth 153.7 million dollars.

Australia focuses on domestic market
Although peppers are grown year-round Down Under, the peak is clearly reached in the summer months. In the 2016-17 campaign, 73,488 tons of peppers were harvested, according to data from Hort Innovation. That volume was sold for $ 172.4 million, which entails an increase of 24% compared to the previous year. Almost all peppers remain on the domestic market. Only 346 tons were exported. Thus, exports recorded a 28% drop. Meanwhile, imports are also falling every year.

China grows for the processing industry
Peppers are not very popular among Chinese consumers; however, hot peppers are very popular. Most of the fresh peppers that are produced are intended for export to other countries in Europe and North America. However, the transport costs are high, because the shelf life of these products is not very long, so most Chinese companies first process the peppers before exporting or reselling the product. In order to guarantee a longer shelf life, many peppers are dried or pickled.

Furthermore, many peppers in China are processed into paprika powder after the harvest and then exported to other countries or sold in China. Last August, there was a lot of rainfall in Shandong and that resulted in flooding, which caused a lot of damage to the vegetable greenhouses in the area. The prospect is for this damage to be fully repaired by next year. In Xinjiang, the harvesting of red peppers has just been completed and these are now on the market.