The Florida panhandle and southern Georgia won't be functioning normally for several weeks after Hurricane Michael caused widespread destruction to the region. The storm crossed the coast as a category 4 hurricane and has been labeled as the strongest hurricane to hit the Florida panhandle. As a result, six people have so far been killed and many hundreds of thousands are without power.

The area is home to many fall crops and early reports indicate that many of these have most likely been destroyed. The worst affected are corn and tomatoes. The reports from growers in the region are incomplete because many of them can't even access the fields due to flooding and tree damage which has blocked roads and cut off many communities. Of those that have been able to undertake a partial assessment, what they've seen so far is not good news.

"Corn lying flat as far as the eye can see"
It's peak season for corn in the Bainbridge, Georgia area. Much of the crop was ready for picking when the hurricane passed directly over. This combination has meant that growers here have most likely lost their entire crop and the market can expect no corn from this region. Scott McDulin of Schmieding Produce said that he has received footage and reports from growers indicating that entire corn fields have been flattened, just as they were ready to be harvested.

"More thorough assessments are yet to be carried out and it will take a few days for us to know the true extent of the damage," he noted. "But it looks like the Bainbridge area was leveled. Growers that have been able to get to their fields are saying that whole fields of corn are lying flat for as far as the eye can see. The corn had just been topped, which is what they when it's ready to go." 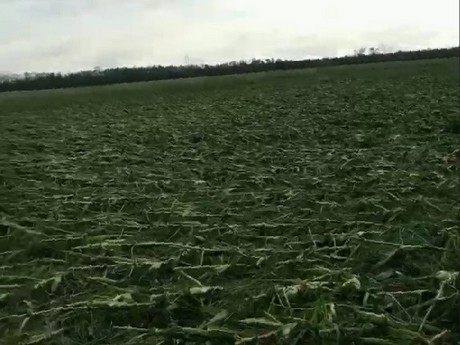 McDulin added that this area has a lot of large trees which has resulted in roads being cut off from when the hurricane toppled them. As a result, the region will likely be cut off for a lengthy period of time. "There has been flooding and a lot of trees are down, blocking the roads. Many are without power and will likely continue to be so for several weeks. It's possibly going to be a month before growers can return to normal operations."

The market will likely rise if and when a shortage of supply becomes evident. A complicating factor in this is the status of the Mexico corn crop. "Mexico corn is coming in late this year," McDulin observed. "If the Bainbridge crop is destroyed as is feared, there could be a gap between now and the Florida season in November."

Pioneer Growers has corn acreage in the Bainbridge area. They have not been able to access their fields yet, but expectations are that the crop has been lost. "We took the brunt of the storm," said Mike Owens of Pioneer Growers. "Bainbridge was on the eastern side of the eyewall, receiving extremely strong winds. We can't get to the crops at the moment because the roads are blocked by trees. It will take another day or so to be able to make a full assessment but based on what we know currently, we are assuming total devastation."

Tomato prices are already climbing
Another major crop that is in the middle of its season in the district is tomatoes. There is a notable tomato growing area around Quincy in Florida, which also suffered a direct hit by the hurricane. This area is without power and at the time of writing, growers are not even present on their farms located here. Information is limited at this time but one broker in Florida said that a few growers have reported significant crop damage.

"I'm having trouble getting in touch with growers in that area due to the power outages and general destruction," he said. "But we are expecting massive losses and are already seeing the effects of this on the market. Tomato prices are skyrocketing in McAllen today due largely to the expected losses in Florida."

Other crops in the area include fall items like cabbage, squash and other vegetables. These appear to have been spared the worst due to the more northerly location of these crops and the relatively fast movement of the storm. Although it is also still early for a thorough assessment. "It's still early but it looks as though the wet beds were spared," said one grower in southern Georgia. "Most of the crops such as cabbage seem to have pulled through ok."

Hurricane Michael quickly weakened and departed the area. The storm moved into already-sodden North Carolina Thursday afternoon, before expecting to be offshore to the east by the early hours of Friday morning.