Recording a TV show at your company, changing buyers and a 15th anniversary. Three good reasons to make a new company film, according to bell pepper sorter MidFresh in Harmelen, the Netherlands. As of late August, a modern company film is online, featuring drone images of the entire production process.

“The old company film was no longer up to date after we switched to Van Oers United as buyer last year. When Dutch TV show Snobs & Sloebers from BNN  then called us to ask if they could film in our warehouse, it was a good time to show what we actually do, and to capture the new containers,” says Berry Gresnigt, Hall Manager for the bell pepper sorter. “After all, people might Google us after the broadcast, and they’d see the old containers, so we had a new film made. The drones flew over the machines, which resulted in great images.” 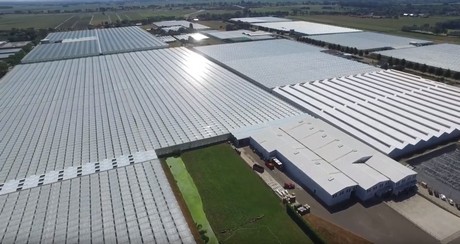 Short supply chain
In 2003, MidFresh was a noticeable newcomer in a time when sorting often still happened in sheds near the greenhouses. “That still happens a lot,” Berry says. “Here in Harmelen, three growers (Concordia, Van Dijk Bedrijven – now called MidBerg – and SDG Paprika) decided in consultation with the buyer to start sorting under one roof at the time. The sorting location is centrally located between the three production companies. The bell peppers can be driven into the sorting warehouse by train.” 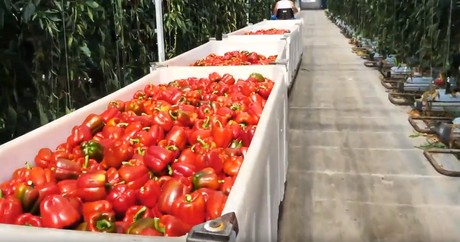 The bell peppers are sorted fresh. “We immediately pack everything into the right container, and our customers can pick up their product directly from here. We no longer need the auction as a link in the process.” 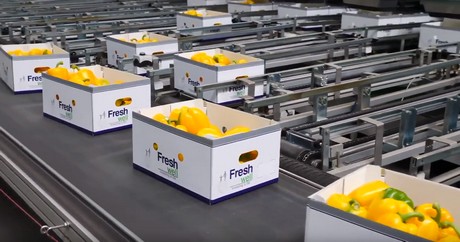 “But the bell peppers also have to arrive in good shape at small, remote villages in Norway, and they have to have a long shelf life after they’ve arrived. Transport costs are high, so you don’t want to throw out a quarter of your pallet upon arrival. In such sparsely populated areas, the bell peppers remain in shops longer. In the end, a bit of plastic isn’t that bad for the environment, considering a lot of bell peppers would have to be thrown out otherwise.” 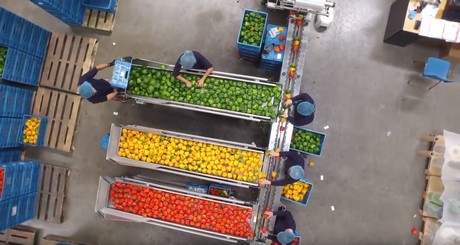 In the meantime, packaging is becoming more sustainable. “We seal bell peppers every day, and flow-packing also continues to be important. However, we have seen demand for the traffic light pack with a yellow, green and red bell pepper decreasing, because consumers don’t really like the green ones. That’s why we do more with the yellow, red and orange combination. Besides, we also see less plastic used in flow-packing. There’s still a bit of plastic keeping everything together, but about 80 per cent of the flow-pack packaging will soon consist of paper.”

Sorting for internal quality
Besides bell peppers from the member production companies, MidFresh also offers to sort the bell peppers of other growers in Harmelen. It helps that MidFresh has had the option to check internal quality since 2010. “In 2010 we started a pilot with Aweta, for which we hung an Inscan IQA, a sensor allowing us to check the inside of the bell pepper for decay, for instance, above our sorter. During the pilot, which lasted three years, we figured out how to sort for internal quality for all colours in cooperation with Aweta. It’s now working very well. Other growers regularly visit us because they have quality problems. This summer a grower had problems with inner decay. After sorting with us, they now have to throw out only 30 per cent, rather than 100 per cent. The rest of the bell pepper turned out to still be usable for consumption.”

In future, Berry doesn’t rule out an expansion for MidFresh. Not so much in terms of greenhouse area, but in warehouse space. “I can definitely envision an additional flow-pack or seal line. Right now we work with about 40 workers from February to November, and that’s a full house. Our mostly Polish workers are glad when they get to visit family in December, while other workers continue working in the greenhouses or help clean the warehouse for the next season.”