How a New Zealand family made tomato growing their passion

Growing fruit and vegetables commercially is not all about serious business and finances. A small New Zealand produce farm, called The Curious Croppers, mainly produce tomatoes on a small scale, but couple Angela and Anthony Tringham are on a ride that has given them plenty of fun and stories along the way.

Recently they were contacted by a lady, who lost her husband, and wanted the Tringhams to help keep a tomato variety alive in his honour.

"He got them during the war (WWII) in Italy, he kept them every year, and is now deceased, and she said she just wanted someone to keep them going," Angela said. "It broke our heart, but also inspired us. So, we've kept growing those, plus we reach out (to other growers) saying we have got these seeds. We have got no idea what they are called. So, we have called it, as it was Mrs Barton, Barton's Choice. It is really super multi-locular, like a beefsteak, but more locular. It's in a category of its own - it's not like any other tomato. It's very round, a lot of the red ones we do are a little bit more oval, and flat on top, this is quite round. It's more on the orange side than red." 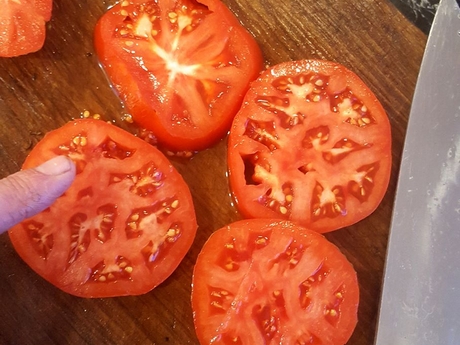 Anthony, who is also on the board for Tomatoes NZ, adds that it was not uncommon for migrants to bring seeds with them, before the tightening of biosecurity. While The Curious Croppers often get given seeds by customers to add to their growing collection.

"I think if you grow interesting stuff, it is easy to get together with people who are passionate about that sort of thing, they don't hold things to themselves," Angela added. "Everyone wants to share. It's not a copyright thing. One of our best tomatoes is our Spanish Red, and people often ask for the seed. We don't keep the seed to sell for that, but we tell people to come to the market to buy it, or get a taste tester and spit out the seeds to keep and plant. We also know that with modern genetics you do lose things along the way, but you don't know what you are losing. So, it is important to keep a lot of old genetics."

The family live in Clevedon, South Auckland in a 150-year-old farmhouse. On the property there are some greenhouses and some old tunnel houses, where they grow their tomatoes. They used to grow pre-pack cherry tomatoes to supermarkets, before they were impacted by a combination of Tomato potato pysllid (TPP) and imports, mainly from Australia. Angela admits that they were thinking about giving up then, but they decided to focus on the areas of farming that made it fun, rather than just serious production.

"We were going to get rid of the tunnel houses because they were non-functioning," she said. "But then we decided, because Anthony likes to play around with things all the time, that we would turn them into the 'play houses' - that's where we constantly grow stuff, grow new stuff, interesting stuff and just see how it goes."

The Curious Croppers had to do something different, that no-one else was doing. After being encouraged by their friend Helen Dorresteyn to join the Clevedon Farmers Market, they got good sales with their punnets of cherry tomatoes, which kept them going back to the farmers market.

"After keeping us at the markets for not even 6 months, we diversified into other varieties that people thought we should grow," Anthony added. "So that's strange and unusual varieties of tomatoes. We have Zapotec, from South America, because it's really crinkly, Oaxacan Jewel from Mexico because it has yellow and red stripes through it, big Brandywines are just the biggest yellow tomato that ever existed, and Oxheart because they have the loveliest shape." 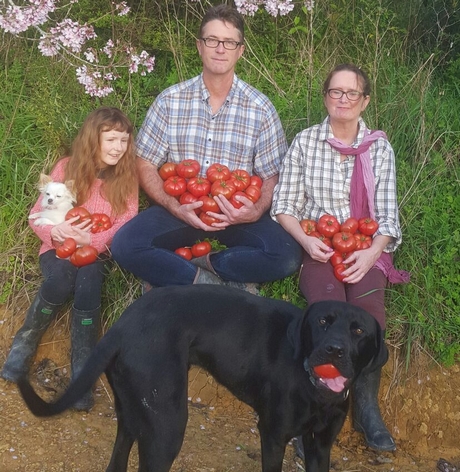 Angela added that the most important thing is growing for flavour, saying tomatoes get their most flavour on the last few days of ripening. Although they have started selling into Hong Kong, Curious Croppers restrict the yields and sell to local customers who really want to buy their products. This model means that it would be difficult to sell to wholesale markets, which are often volume-driven.

"One thing that I have loved in the last couple of years is the average consumer, and chef, have started to get far more savvy, about the fact fresh food shouldn't last that long," Angela said. "It's not right and not what nature intended. We also want to make vegetable growing fun, because there's a bit of a disconnect between the city people and the growers in the rural areas. We get sick of hearing that this particular vegetable is expensive at certain times of year. That may be because it is out of season, or it has been raining for weeks non-stop. People don't think about this."

The Curious Croppers say that another one of their objectives is to create a growing world where no one sprays, and the business is currently involved in growing flowers and weeds to collect beneficial insects for an agroecology project (which Fresh Plaza will detail in a future article).