Cutting two hectares of strawberry plants in one day

At Genson in Sint-Oedenrode the strawberry plants have been propagated since July in a renewed tray field. By propagating above the soil, the company that is involved in the propagation of plants wants to reduce the disease pressure. In addition, with the new tray field it takes the first step towards mechanization. "We have two hectares of runners cut in one day." 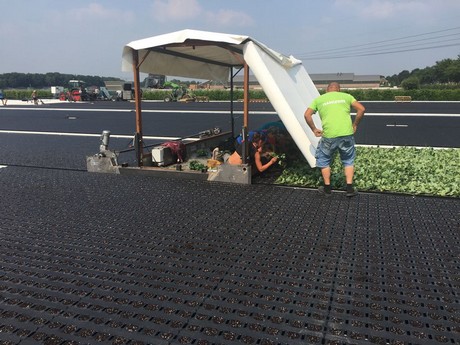 And of course, growers would rather prevent harmful fungi than have it occur. Phytophthora, for example, can cause serious problems. Meteor Systems and Broekman Agro have developed a system to work above the ground. "We create distance between the plant and the anti-root cloth, so that no diseases can be transmitted from there", Erik van Nieuwenhuyzen of Meteor Systems says.

The plants are now placed on a specially developed 28-hole tray that makes the mechanization possible. The tray has a cutting edge that simplifies the process of cutting runners. The ventilation holes also serve to drain excess water during heavy rain showers. 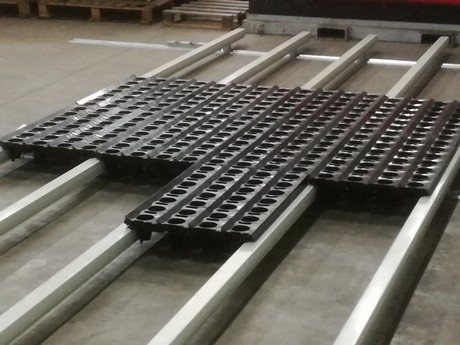 It is striking how close they are placed to each other in the new tray field. "We can place about one and a half times as many plants per hectare," says Erik. "That is particularly good news for growers who want to expand but do not have the space for it. The system can be placed on the existing tray field without any restriction."

How is that higher density accomplished? "For activities such as cutting runners you must be able to be close to the plant. When the plant trays are on the ground, you must keep space to reach the plants. That is no longer necessary with this system. Paths are a thing of the past. "Because of this, all the plants have the same amount of space. "This results in a uniform growth and per plant also less water and fewer resources are needed. Because they are closer to each other, all the water is collected and less of it disappears into the soil." 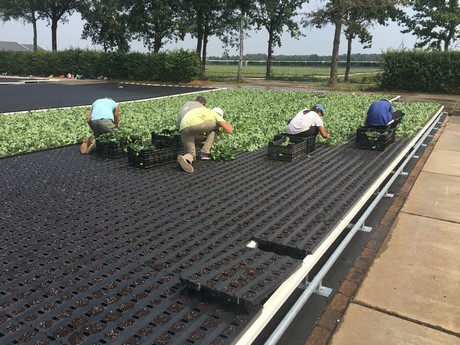 In order to be able to do the work on the tray field, a frame has been developed. Various machines can be coupled to this frame, among other things to simplify the removing of cuttings from the plants. Erik explains: "Due to the tight dimensions you can carry out work over the total width of five meters. The tray field is the basis for mechanization. A machine that makes it easier to cut runners has been in use for three weeks. With that we have done two hectares in one day. Much faster than with the handheld machine that is used when the plants are on the ground." 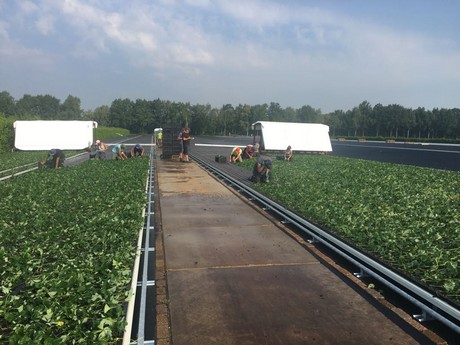 The machine for removing cuttings, cutting runners and leaf sucking is the first one, and there are plenty of plans for more. "In the future we want to make the filling faster and the cutting removing easier. In December the plants are removed from the trays, it would be nice if that also could be done automatically."