Marc Laberge continues to work on perfecting and fine tuning:

Since the early 1990’s, Marc Laberge, founder and president of the Canadian company ML Aquaponics inc., dreamed of designing the perfect fish farm after managing a large one in Quebec, and working as a fish parasitologist at the McGill University Institute of Parasitology, where he learned about recirculating systems. The experience enabled him to approach the field of aquaponics, from the fish side of it contrary to most people who approach from the plant side and find that raising fish can be difficult, especially high end fish. 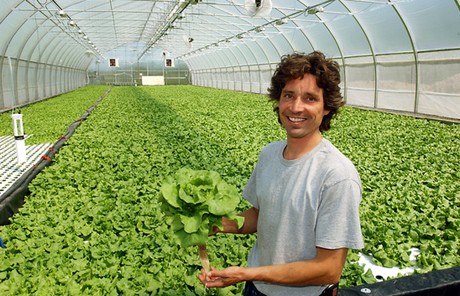 Marc Laberge inside his Aquaponic greenhouse

After some trial and error, in June 2005, ML Aquaponics finally grew its first 6,000 commercial heads of lettuce, turning Marc into the region’s pioneer in aquaponics; a sector which was virtually unknown back then and which has been in constant expansion ever since. Competition has forced the firm to strive to maintain the highest quality standards with the lowest possible operating costs.

Marc does not shy away from openly talking about the highs and lows that he has experienced over the last 10 years; “there have been hard times, but they made me stronger, commercial aquaponics is not as easy as many say and mistakes cost big dollars. Marc warns about some clowns claiming to be aquaponic consultants. "Hire a good consultant with a known aquaponic commercial background, there are a handful or two out there, not cheap, but will save you a fortune." 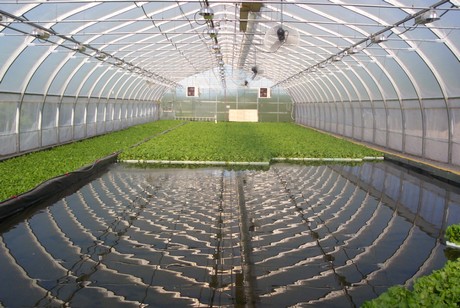 This famous picture of Marc's greenhouse is used in many publications about aquaponics.

ML Aquaponics’ fish farm raises rainbow trout, which is why the lettuce variety grown by the company is called Mountain Rainbow. The company produces 45 tonnes of lettuce heads and 7.5 tonnes of trout per year. Marc explains that “the firm is not big on the fish side, but this depends on the design; Laberge says he can easily double his fish output, but would be stuck with over 400 litres of fish fertilizer per day; an environmental problem to some and a necessity for others. All depends on the countries; some are attracted to the low water consumption, others to the natural product… designs are endless. Although nothing but high-end techniques and equipment are used. Both the lettuce and the fish are produced in a 100% natural way and have gained quite a reputation for their quality.” 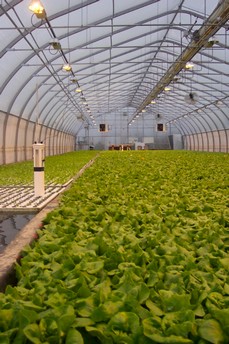 The company’s double poly greenhouse is 225 feet long by 40 wide and operates all year round. It is equipped with supplemental lighting, which is merely used to extend the day. Marc affirms that the future may lie in LED lightning, but which he believes will only reach reasonable prices in about 5 to 6 years.

Since the company’s success, aquaponics has attracted a lot of attention in the area and ML Aquaponics has received frequent buy-out offers. Marc’s interest for the future is either to establish franchises and expand or to be completely bought out and have a bigger budget to work with. In the meantime, he continues to work on perfecting and fine tuning, allowing him to have great insight into what the future performance of any aquaponics-devoted firm will be.