'The Real Martian' talks about his DIY greenhouse

One day, people are going to Mars. At least, that's the idea, propagated by visionaries like Elon Musk. One of the biggest challenges of putting human beings on the red planet is, quite simply, feeding them. Growing veggies out in the open doesn't seem to be an option in the harsh environment on Mars, but fortunately we have controlled environment agriculture. 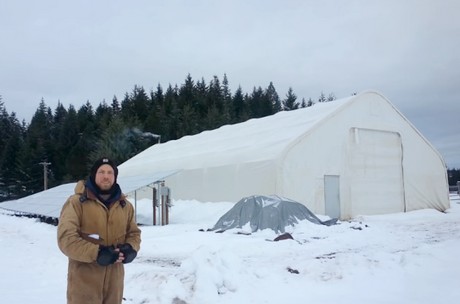 Several companies and universities have already tackled the issue of how to grow food on Mars. Among them are AutoGrow, who organized a hackathon around this subject, and Wageningen University, where scientists used Mars soil to grow safe-to-eat crops. Other potential options are an inflatable greenhouse developed by NASA, and even the use of 3D printed food has been suggested.

But let's move a bit closer to home - to Jeff Raymond's home, to be precise. Jeff, an Aerospace Engineer by degree, decided one day he wanted to help feed the world. Well, at least the people around his Washington home, where, after five years of research, he and his wife built a sustainable Martian homestead. Here at HortiDaily we're of course interested in the greenhouse aspect of this unusual project, so we asked Jeff for some more information.

When he started the project, he didn't have any experience in controlled environment agriculture. "I've done a lot of things in my life, but nope, never worked in ag or a greenhouse."

So, he approached the problem like any engineer, developing a problem statement (sustainable food and energy), creating a list of use cases, decomposing those into requirements, and developing a system design to meet these requirements. "I drew, using computer aided design tools, the system and wrote a simulation script to evaluate my potential solutions. The simulation showed that my concepts worked but, power was the limiting factor. So I then started searching for hardware components that could solve my problems and wove them all together to meet the requirements I had, as best as I could. During this time there was a lot of research conducted. I looked at journals, publications, papers from academia, etc. I just pieced the puzzle together as best I could (not that I have solved the puzzle). Once I got to a point where I felt good about the design and about the parts I'd buy to build it... that's when we broke ground and started building."

Since that time, Jeff's wife enrolled in a Master Gardeners class held through the local extension office. "She's really become the brains behind the growing/plant care. My job is all about the systems and how they come together to meet her needs as the operator. So for example, she may tell me that the plants are too wet, so I need to adjust the software that controls that aspect. Or, she may say that there isn't enough light (actual problem), so I have to find a way to get more light into the system."

Jeff says he did a lot of searching for the structure during the design phase. "A key requirement for me was the wind speed in our location, up to 75Mph, as well as the snow loading. To that end I chose to go with a galvanized metal frame building with a woven PVC cover. Our intent was to do indoor growing with LEDs so at the time of this decision we weren't too concerned with available light... in fact we were happy about the fact that the woven PVC wasn't transparent and was white, so it reflected the summer sun. Of course this meant that in the winter, it also reflected the winter sun, and made it hugely expensive to heat." 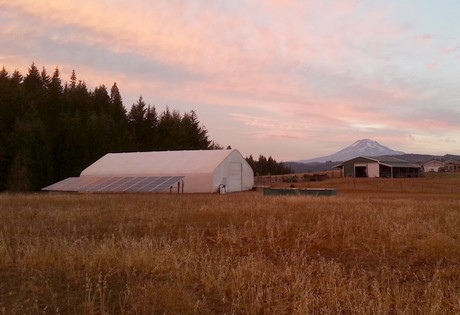 Vertical farming
Another key factor in their building decision was height. "We are trying to make one square foot of land worth two, so vertically growing is key. We needed at least 12 ft. tall, and it was hard for me to find that structure." The large fabric covered buildings turned out to have the right form (gothic arch style) and had the height.

Apart from the greenhouse itself, Jeff also needed equipment, of course. Some things, he says, are just made great already and he doesn't need to build them: dehumidifiers, large fans, pumps, etc. "But some things either don't exist or are far too expensive for normal people to be able to buy them. So for those items it's all about custom. I build new products for a living so I'm familiar with the process to go from idea to full on sellable product. I'm hopeful that someday, we can crack the code on some of our harder problems and be able to generate the custom solution that we could productize and sell to others."

Energy
Jeff made a conscious decision not to purchase a ready-made container farm. "Our mission is to provide sustainable food and energy to our local community. In my research I have found many solutions like those, but I have not come across a solution that truly tries to deal with food and energy together, that can support a variety of environments. The long term sustainability of any controlled environment growing system, will by logic, require power/energy. Without that, you are back outside, in the ground, and at the mercy of nature. So it seemed to make sense to go after these two problems together."

Instead of copying others, which he says doesn't necessarily lead to innovation, Jeff prefers to roll up his own sleeves. "I think what is most valuable about experiences that we can share, are our failures. In other words, I like to read about how others do things. Not necessarily so I can copy them, but so I can understand the problems they faced. This gives me a little more of a blank sheet of paper to innovate with and doesn't presuppose a solution to hard problems. Said differently, while I learn from the mistakes of those that came before, I don't constrain myself to their solutions."

Condensation
Currently, Jeff doesn't have any people in the greenhouse industry he consults with, but he says he's open to it. "One key problem I have is balancing insulation with condensation. I believe everyone has that problem. We installed the ventilation fans which are the go-to solution, but that really destroys your heating costs. So we also installed dehumidifiers (more of a truly closed system concept) and are having decent luck with them, but we still have the condensation problem."

Scaling up
So there are opportunities for greenhouse growers to teach Jeff a thing or two, but maybe that also works the other way around. We asked Jeff if his experiences could help professional greenhouse growers in their own endeavors. Perhaps his operation could even be scaled up in an economically viable way? "We started with our system design in the corner of our office in the house. The system you see on YouTube is a scaled version of that system... so yes, absolutely, beyond a shadow of a doubt it scales. Economically this system can pay for itself in about 8 years when it's fully operational. That's a good ROI. I think the key for us is that we didn't just go buy what everyone else is selling, but have pieced together the absolutely essential items required for operations. We were given this advice when we started, if you are given a hammer to solve a problem, everything is a nail. Said differently, if you are given $1M to solve this problem, you'll spend it... even if the solution was $200k." Jeff adds, with a smile, "I'd like to think that everyone can learn from our mistakes and successes. I'm hopeful of that any way."

And the million-dollar question... does Jeff actually grow in Mars soil? "We don't use any soil in the system - just lava rock (which is very similar, though not the same, to what we know about Martian rocks), so in that sense... kind of, maybe, sort of", he says, laughing.