Last week saw the opening of GrowX Amsterdam. With 200 square meters of vertical farming space, it is the first large commercial urban farm operating in the Netherlands. Founder John Apesos was eager to provide us with a tour around the pink venture that is currently supplying an impressive selection of haute cuisine to top chefs and restaurants in Amsterdam. And not without success; "We can't meet the demand, we have to expand." 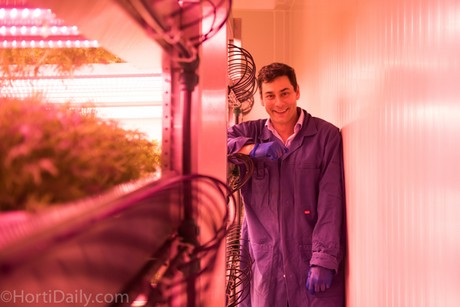 GrowX Amsterdam's John Apesos inside the 200 square meter phase 1 farm.
GrowX Amsterdam is located in a warehouse facility in proximity of the city center of Amsterdam, 600 meters from Ajax' ArenA Stadium. Apesos, a U.S. citizen, and his Dutch counterpartner Jens Ruijg, a biochemist with a specialism in sustainable technologies, came up with the idea to transform the location into something that like-minded youngsters have been doing in Apesos' home country for some years now; a commercially operating vertical farm that uses advanced technology to grow food in such a special way that it catches the attention of a whole new group of customers and a next generation of farmers.
Backed by investors and supported by local authorities, GrowX Amsterdam started with the construction of their farm last year. They contracted Dutch engineering firm Lek-Habo who on their turn designed a rigid closed environment production unit that incorporates technology from horticulture suppliers like HortiPlan, Valoya and HortiMaX. The farm houses a sterile seeding facility where microgreens, sprouts and other cresses are seeded into NFT gutters, a 20 ft. shipping container that is used to germinate the seeds and a state of the art 200 square meter climate room that has 4 layers of production under LEDs. 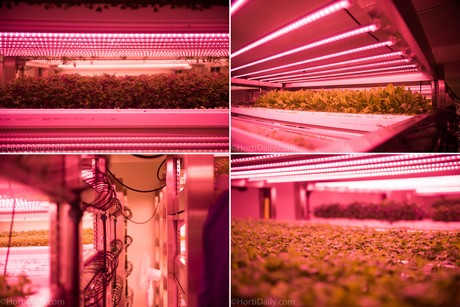 The fully grown leafy greens and culinary herbs are harvested and shipped the same day in special 'GN' standardized containers that are commonly used in Dutch kitchens and restaurants. And this is how GrowX wants to make a difference in the current offer. "We shorten the chain by growing and picking customer specific orders that are shipped by ourselves in recyclable containers. By doing so we close the loop, increase freshness, shorten delivery times and reduce packaging waste."
And apparently this disruptive approach pays off; because where a lot of Dutch greenhouse growers are breaking their heads on how to grow as efficient as possible and at the lowest cost, GrowX does not worry too much about the cost of production, but focuses on their marketing and delivering the freshest possible product that their customers ask for. And keep asking for; the farm already announced to double the production capacity with another 250 m2 expansion. 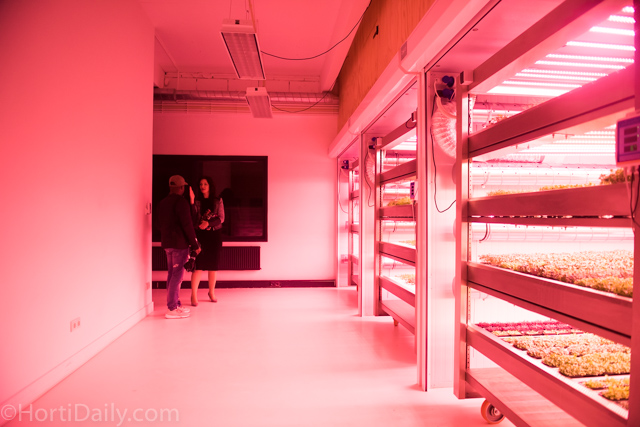 A special demo setup where chefs can check out and experiment with new varieties.
It is interesting to see that their operations run cost efficient, because that same struggling Dutch greenhouse grower might think; how is it possible that fancy cresses and leafy greens can pay the bills for all that climate control and LED light. The answer; marketing. Or better said; create awareness of the fact how fresh, local and sustainably grown your product is. Chefs love to explain to their customers that the green garnish on a dish is cultivated by the next generation farmer, in downtown Amsterdam with the help of futuristic sustainable technology. And that story comes with a price. 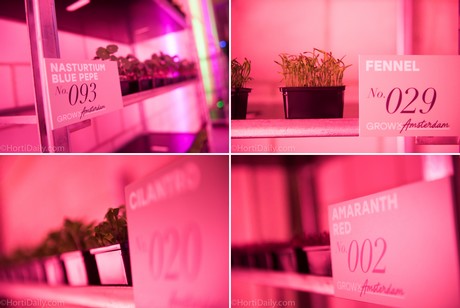 GrowX partners with their customers to create tailor made greens.
But what about the thousands of acres with sustainable greenhouses that the Netherlands are known for? After all, the Dutch are joining global respect for their knowledge on efficient and sustainable agri-food production technology. Are chefs not interested to tell that story? Yes, they are, but apparently not every traditional Dutch grower has been able to spread that story with a similar enthusiastic drive as the next generation of future farmers like the ones involved with GrowX.

GrowX Amsterdam celebrated its opening last week.
And this is noteworthy. Especially in a time that the relatively new vertical and urban farming industries are subject to a lot of criticism from naysayers. But hey, please think positive; just like many other vertical farming projects in the States, GrowX Amsterdam is the result of a group of a lot of young passionate people who are interested in sustainable and efficient food production systems. Instead of naysaying, the traditional fresh produce industry should embrace this and take maximum advantage of their disruptive mindsets. Because without any doubt, a lot of traditional farmers can learn a lot from the creative marketing strategies of this new industry.
See also: www.growx.co