Last Friday, the Leamington Chamber of Commerce hosted the local greenhouse industry for a ceremony that announced the beginning of a feasibility study that will research the creation of a Centre of Excellence. The centre will represent the needs of the sector and help develop the skills, innovation and environmental practices of the greenhouse industry in Essex County. 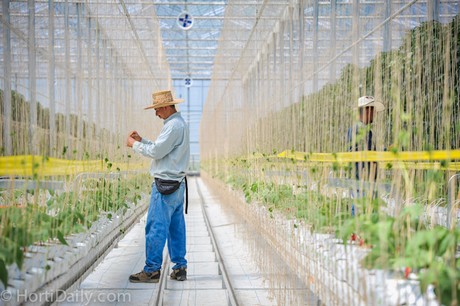 A $75,000 grant from the Ontario Trillium Foundation will fund a year long feasibility study and hire a consultant to research the potential for degree and diploma programs in the region.

The plans are a direct result from the current growth that the greenhouse industry in the Leamington region has seen over the last couple of years. Growers have been expanding, adding new crops and greenhouses. Officials are also optimistic about the growth of the agri-business sector in the area and believe that a Centre of Excellence is needed to serve the important business sector.


Denise Ghanam of Ghanam Consulting Inc., said in a report on CTV Windsor News, that the Centre is needed to create better job prospects in the greenhouse industry, one of the top economic drivers of Leamington.

The study will look at the potential for degree and diploma programs and will address the problem of attracting youngsters to establish a career in the commercial greenhouse industry. Furthermore the Centre will focus on retaining current employees and provide them with education to improve and upgrade their skills and careers, including the careers of migrant workers.

A special committee will come together in early 2017 to discuss background research and meetings with potential industry stakeholders.