Finnish indoor farm entrepreneur Robert Jordas has been awarded for the vertical farming venture he kicked off last year. The entrepreneur, who started to grow the first crops in his self designed multilayer lettuce cultivation system this year, was presented with the prize for the horticultural innovation efforts he made within the Finnish industry.

Jordas received the Horticulture Innovation Award from Puutarha&Kauppa, a trade magazine for the fresh produce, floriculture and horticultural sector in Finland. According to the jury, Jordas is an open-minded entrepreneur. He saw clear opportunities for new production technologies and innovation, while running his 8,000 square meter greenhouse for the production of lettuce and herbs.

The multi-layer farming project is located at Jordas' company Robbe's Little Garden Ltd. in the municipality of Lapinjärvi, in the south of Finland. Here he has been running a greenhouse operation since 2002 in which he grows lettuce, herbs and vegetables on a year round scheme. Jordas was an early adopter of LED lights in his greenhouse and in 2006 he came up with the idea of designing his own multi layer cropping concept. 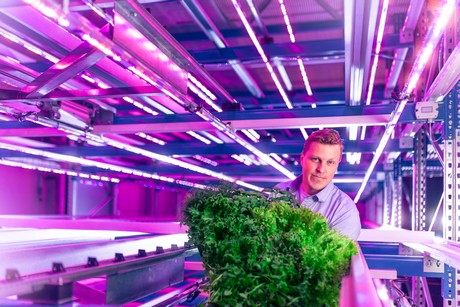 Today, Jordas successfully operates one of the most advanced vertical farms in Scandinavia to cultivate potted herbs and leafy greens. At the time he started, the technology available for vertical farming was still insufficient and much was still unknown. Over the years the Finnish grower learned a lot and improved his system. He teamed up with Finnish technology suppliers like NetLed and Novarbo. His project gained further momentum when representatives of Japanese multinational Fujitsu expressed their interest in the project. Jordas even started a collaboration with the Japanese tech company for a trial of their cloud based Akisai agricultural software platform.

The jury addressed that Robbe's Little Garden vertical farming concept has played a pioneering role and addresses the potential of the Finnish horticulture industry, which is known for its crucial role in the development of innovative hydroponic and aquaponic lettuce cultivation, pushing the production efficiency, quality and energy efficiency forward.

"While Finland may not be the best market location to make vertical farming work at its full potential, the project provides a good opportunity to experiment and eventually export the system to other parts in the world", the jury report said.

This is also Jordas' aim; he plans to design and build a first fully automatic version of his multi-layer growing system in Lapinjärvi. As well as this, he is working on smaller versions of his system. All of this with the aim to export his technology and help other entrepreneurs. "We will continue our work in Lapinjärvi, it provides a good springboard to develop the concept and look forward to share our experience and technology with the rest of the world." 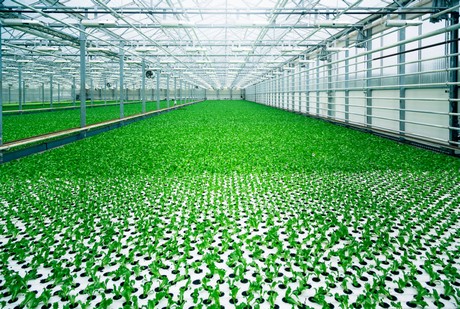 Lettuce grown inside Robbe’s Little Garden Ltd. Robbe's annually sells about 3.5 million packages with lettuce. They employ about 20 people and primarily produce for the local market as well as export to Sweden.