New treatment to cure and improve cucumber infected with CGMMV

Korean crop protection developer JungWan B-F has conducted a new series of trials to fight Cucumber Green Mottle Mosaic Virus (CGMMV) in greenhouse cucumber crops. The company claims to have found a treatment to slow down, cure and improve infected crops with CGMMV and regain crop development.
The trial of JungWan was performed on a total of 800 baby cucumber plants in a 90m2 CGMMV-infected greenhouse plot. The researchers did not apply any fertilizers or additional nutrients on the crop. 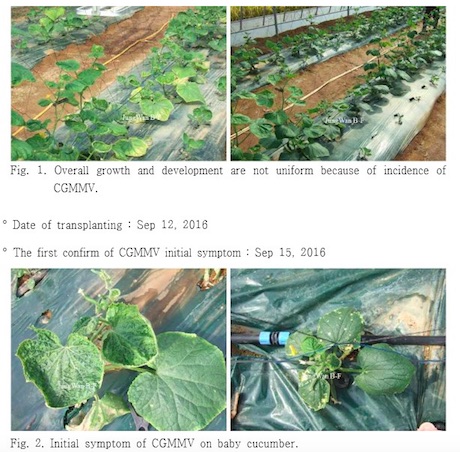 The plants were transplanted on September 12 and first symptoms of CGMMV were visible three days later on September 15. On September 24 the virus was spread throughout the entire greenhouse and a first spray-treatment with Jungwan’s Johnny-Der V2 was applied. This application was repeated 6 times, once every three days. One last additional spray treatment was applied on October 17.
“After six continuous sprays we observed the first improvements on the CGMMV-infected crops on October 11”, said Do Kim of JungWan B-F. “Leaves had grown normal again and the plants started to develop from top to bottom. Most of the baby cucumber plants showed good internode development and had between 12-17 nodes.” 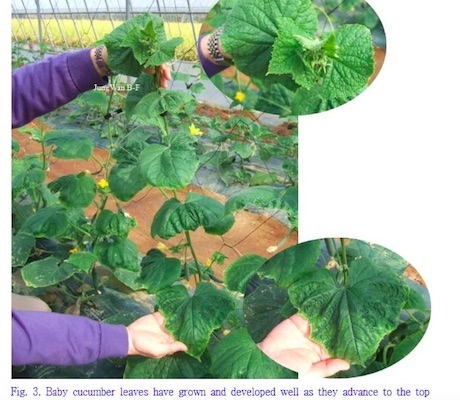 According to JungWan, the fruits that were already developed by the crop during the infection were still harmed by the virus. Nonetheless, new fruits and sprouts were growing and developing well.
However, the trial plot did not recover uniformly and treatment with Johnny-Der V2 was found to be the most effective on crops that were less affected by the CGMMV virus.
During a second observation on October 18, the baby cucumbers showed a better condition. Some of them even being cured and with others being in an improved recovery stage. The situation of the crops that were identified as still infected during the first observation, did not improve.

JungWan believes that treatment with Johni-der V2 can deliver a greater contribution as a preventative measure, when applied before the first signs of infection. “In this trial we did not undertake any other special measures like adjustment of the irrigation strategies”, said the company in a news release. Follow up in-depth studies and more demonstration trials can determine the further potential of the crop protection agent. As well as this, JungWan wants to research if Johnny-Der V2 can be applied in during seed production, to see if the CGMMV virus can be eliminated from the root.