The story of Boem Berry Farms:

In August the first strawberry plants were planted in the new greenhouse of Boem Berry Farms in Kingsville, Ontario. The new company is the result of a partnership between Canadian grower and marketeer Mucci Farms and Dutch growers Ton Bastiaansen and Joost van Oers. 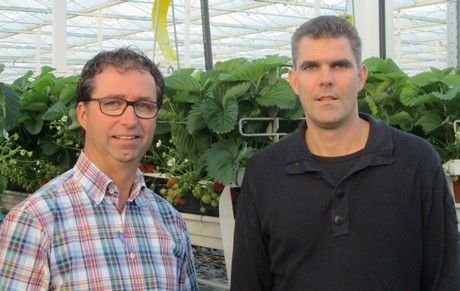 Ton and Joost got together and decided to investigate. "After traveling a bit back and forth, we settled on Canada," they say. "Preferably on the east coast, far away from the open field cultivation in California, from where strawberries are exported eastwards en masse."

Last year, the growers rented a small 1.6 ha company in Canada where production and propagation of strawberry plants was trialed. They also conducted research into the demand for greenhouse strawberries in North America. It turned out there was both demand and interest, also from retailers.

Ton and Joost say that finding a suitable partner in Canada was equally important. "We opted for Mucci Farms, a company with years of experience producing and marketing greenhouse vegetables." Today, the company grows tomatoes, cucumbers and bell peppers on a 170 hectare acreage.

Ton and Joost invited the marketeers to Holland, to show them how packaging, transport and marketing is handled there. "Particularly to remove any concerns regarding the long road the harvested strawberries may travel before reaching the consumer. As they got a deeper understanding of the Dutch strawberry chain, their enthusiasm continued to grow."

In January of this year, the partnership was signed. Boem Berry Farms, a contraction of the names of the three entrepreneurs Bastiaansen, Van Oers and Mucci Farms, got a face from then on. Then, in March, they bought 25 hectares of land in Ontario. "We were able to handle the propagation of young plants ourselves at the rented company, so nothing got in the way of us starting right away. The biggest step was building the greenhouse. We had to find a greenhouse builder who could realize the first full 5 hectare project in three months. We decided to go with Thermo Energy." 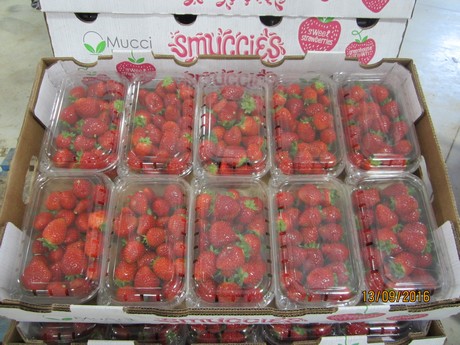 First plants in the greenhouse

Ton admits it was a bit uncertain whether the deadline could be met. "During construction, we were faced with very bad weather conditions. The wettest April month in a long time threatened to throw a spanner in the works, seeing how the mother plants had already been planted at the rented company. Construction started at the beginning of May. Fortunately the project made good progress, but time was of the essence. With the help from all parties involved, we managed to plant the first plants on August 15, exactly the date we had planned."

In the Boem Berry Farms greenhouse, strawberries of the Sonata variety are grown. Ton and Joost say the season is going well, partly thanks to the good weather. Because we have high insulation both in summer and winter, we opted for glass with 75 percent diffusion on the south side, and 25 percent on the north side of the roof. "This gives a good climatological effect," they say. "We also have a new type of substrate tray for the ever-bearers. We developed this tray ourselves in conjunction with Meteor Systems. The tray has a cutout on both sides to put in the plants. By opting for lying the plants flat, we have less work pulling through the vines. This isn't possible with the current substrate trays. It works perfectly." 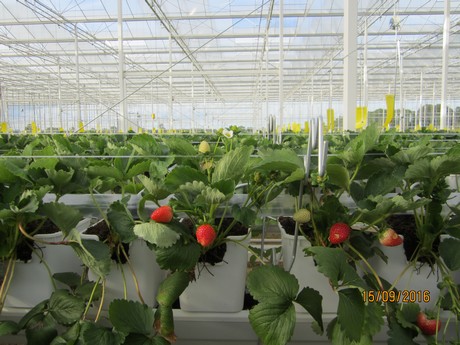 The new greenhouse has an acreage of 5 hectares. 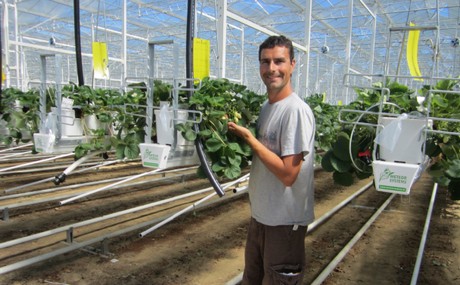 Joost and Ton are still running their own strawberry company in the Netherlands, and travel back and forth to Canada. A cultivation advisor visits the company now and then. There's also daily contact with Canadian manager Blake Fischer. He's been involved in Boem Berry Farms from the start. On the computer, the entrepreneurs can look at the crop and cultivation data at any given moment. The strawberry company expects a similar yield to the Netherlands: about twelve kilograms per square meter. Boem Berry Farms hopes to be able to expand by another 5 hectares soon. With the accommodation and the purchased ground, it's possible to expand to 15 hectares in the future.
For more information: