Today was the last day of the Iran Green Trade Fair, the new horticulture trade show in Tehran which is organized as one of the first platforms for horticultural and agricultural development in Iran in the post-sanction era. 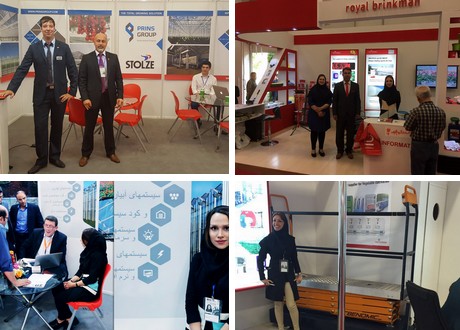 The Iran Green Trade Fair was more or less a Dutch enclave in Tehran; of the 63 exhibitors at the show, a total of 40 were Dutch companies with a background in greenhouse construction, automation, starting materials and floral trade. The Dutch pavilion housed many exhibitors that see good opportunities in exporting their greenhouses and fresh flowers to Iran.

“It’s been very busy and very positive. I have spoken to several Iranian local greenhouse builders with small and large projects and huge potential,” Wouter Heezen, sales manager at De Gier Drive Systems told the Iranian Financial Tribune. Just like many others at the show, he expects a lot of the greenhouse market in Iran. "It is going to be a big market. A lot is going on and the government is going to support investments,” he added.

But it's not just the Dutch who are curious about the possibilities in Iran; other key players in the international horticulture sector are also watching the developments closely. Therefore a number of other international players, like Italian gutter manufacturer P-TRE, French greenhouse builder Richel and Belgian greenhouse manufacturer Vermako, were present in Iran.

German screen manufacturer Novavert was present as well. According to Niclas Heescher, the Iranian market provides good opportunities for the export of his screens and retractable roof systems. "There are a few interesting greenhouse complexes in Iran and we hope to identify a good local partner to develop our presence in the market. So far the show has been great and the visitors are interesting and nice people."

According to the data provided by the Greenhouses, Medicinal Plants and Mushroom Department of the Iranian Agriculture Ministry, Iran is home to only 0.3% of the greenhouses in the world. Last year’s figures show there were more than 10,000 hectares of greenhouses across the country. The country's Vice President Es’haq Jahangiri told the Iranian Financial Tribune that it is one of the main priorities to develop advanced greenhouse farming. "This method of agriculture would help create jobs and conserve both water and soil."

This vision led to several new business opportunities earlier this year, when a trade delegation with Dutch suppliers visited Iran. By then, greenhouse constructor VB Group was one of the first to sign a contract for a 20 hectare project in the province of Semnan. As a follow up to this, we are now very curious to hear from other participants to learn about their experience with this first edition of the Iran Green Trade Fair. We scanned Twitter for some impressions of the show, but feel free to submit your own pictures and experience to boy@hortidaily.com