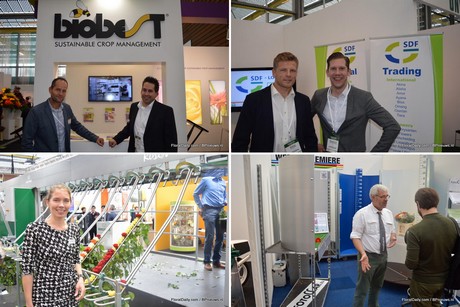 The trade show started off with a bang on Wednesday, and immediately showed its international character. On Thursday, more regional entrepreneurs found their way to the trade show, and on Friday the fair ended in a relaxed atmosphere.

Subjects discussed by the growers included the Valentine's Day troubles: because it's on a Sunday in 2016, entrepreneurs fear declining revenues. Among the international visitors, not only the exchange rates, but also many natural phenomena are cause for fear. Kenyan and Colombian growers fear the consequences of El Niño: rain and early cold could disrupt production. Furthermore, Ecuadorian growers fear the consequences of the possible volcano eruption.

The IFTF provides a stage for producing and trade parties that aren't involved with the auction. Many technological possibilities are also shown at the fair. New this year was the focus on the florist. Under the name "IFTF World of Flowers", the flower shop of the future was on display.

The coming weeks, more stories about innovations at the trade show will follow. But first the photo report!