Leading greenhouse growers SunSelect and Divemex have launched a new brand in partnership with their shared marketer, The Oppenheimer Group. The Outrageously Fresh brand will feature premium greenhouse products from the U.S., Canada and Mexico under one banner.
“We wanted something different that could unite SunSelect and Divemex with a common message and still let each partner retain its identity,” said Mike Reed of SunSelect. “Part of that message is trying new things and pushing the envelope.” The brand unites large combined acreage that includes 115 acres in Canada,64 acres in California—with a potential of 128— and over 750 acres in Mexico. 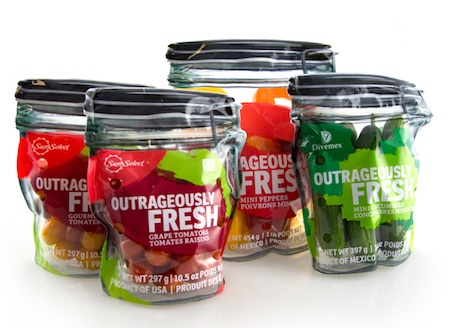 “For Divemex, it's an easy partnership with SunSelect and Oppenheimer because we share the same philosophy on quality and responsibility,” said Luis de Saracho of Divemex. “What differentiates us from our competitors is the volume we have with only two companies. Other companies need many more growers to match the volume we have with only two, and that makes packing and quality control much easier.”
In keeping with the fresh and new theme, the Outrageously Fresh label will feature new packaging. New jar bags will contain snacking tomatoes, mini cucumbers, mini bell peppers, and in the future there's the possibility of packing cherries, berries, grapes and cranberries that Oppenheimer also markets.
“We wanted something for the brand that wasn't the standard clamshell, so we locked up the jar bag for the next three years for use in Canada, the U.S. and Mexico,” said Mike. He added that new markets could also be on the horizon as well as new greenhouses in the U.S.
For more information
SunSelect
Mike Reed
T: +16046077655
Mike.reed@sunselect.ca
www.sunselect.ca