Expansion of the Thanet Earth site are still in hand:

Norfolk based 18 hectare greenhouse grower, Cornerways Nursery have signed a deal with Thanet Earth to market 15 hectares of their produce for the next 5 years to national retailers. Previously, the largest single site tomato glasshouse in the UK marketed all of their produce via Greenery UK. According to a spokesperson of The Greenery, the cooperation regrets Cornerways decision to end the contract. The 3 remaining hectares are most likely to be marketed by Cornerways separately.


The new agreement gives Thanet Earth the marketing rights to the Cornerways' crop for national retailers and links the two companies in a long term arrangement. According to a new release, the deal will bring 'exciting opportunities for both partners'. 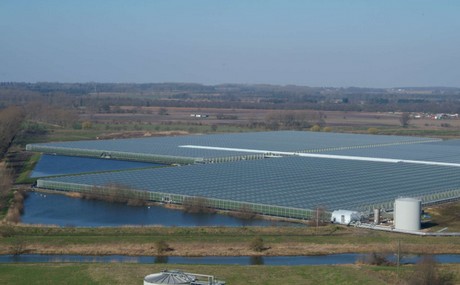 In addition to the Thanet Earth existing tomato acreage (18 hectares across two greenhouses), and factoring in the Thanet Earth 52-week lit production model, this deal takes the volume of UK-grown tomatoes marketed by Thanet Earth to some 25%.

The 4 greenhouses at Thanet Earth. Plans to continue the expansion of the Thanet Earth site are very much still in hand. Further exciting news is expected soon.


Thanet Earth, a joint venture owned by Fresca Group, Kaaij UK, Rainbow Growers and A&A Growers, is a state-of-the-art greenhouse development area in Kent. When completed, the site will feature seven enormous greenhouses, producing tomatoes, peppers and cucumbers. So far, four of the greenhouses have been constructed and are fully operational alongside an on-site packhouse. Plans to continue the expansion of the Thanet Earth site are very much still in hand. "Further exciting news is expected soon", said the joint venture in a news release.

Discussing the deal, Thanet Earth managing director, Des Kingsley, said: “Building on a hugely successful period of operation to date, the team has generated strong momentum and delivered excellence in every respect. This significant new achievement builds on this progress, and we’ll be working closely to make sure we make the most of this great opportunity.”

Patrick Harte, general manager of Cornerways Nursery is also looking forward to working with Thanet Earth. He said, “Cornerways are delighted to have signed a 5-year agreement with Thanet Earth. It is great for us to have a partnership with a forward thinking partner with a similar set of ambitions and values.”