A salmonella outbreak linked to cucumbers grown in Mexico has killed one person and sickened hundreds in the United States, health officials said. The outbreak of Salmonella Poona has been reported in 27 states since July, according to the Centers for Disease Control and Prevention.

Of the 285 people sickened, more than half have been children younger than 18. The fatality occurred in California. Andrew & Williamson Fresh Produce of San Diego on Friday voluntarily recalled its “Limited Edition” brand garden cucumbers, which were grown in Mexico.

Health officials say the cucumbers are the likely cause of hundreds of illnesses since July 3 and the Aug. 17 death of a 99-year-old woman.

Andrew & Williamson Fresh Produce said it is working with health officials to determine if its products are the source of the outbreak, and it undertook the voluntary recall out of caution. 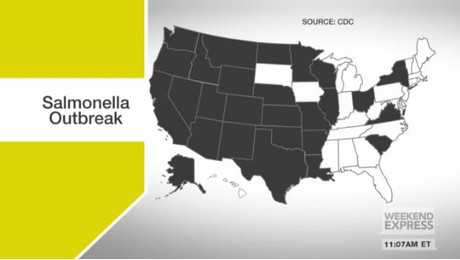 "The safety and health of the consumers who buy our products have always been the highest priority for us," Dave Murray, a partner in the company, said in a phone interview with USATODAY. "I bring our produce home to my family, that's how much I believe in the produce we buy, ship and sell. We've invested millions to make sure our food safety systems are effective and up to date."

Arizona is among the hardest-hit. The state said it has identified 66 cases in six counties as of this week. Health officials reassured residents that the food produced in the state is not at risk.

“State and local health departments have been working around the clock with federal partners to rapidly identify the source of this outbreak so we can inform the public,” said Dr. Cara Christ, director of the Arizona Department of Health Services.

Salmonella Poona causes the same symptoms as the regular subtype of the ailment, including nausea, diarrhea and abdominal cramping. Infants, the elderly and those with weakened immune systems are especially vulnerable.

The U.S. Food and Drug Administration along with the Centers for Disease Control and Prevention and state and local officials are investigating the multistate outbreak of Salmonella Poona infections. The FDA is moving quickly to investigate this issue and learn as much as possible to prevent additional people from becoming ill. Click here for more information on the FDA's website