Development of agriculture in Myanmar 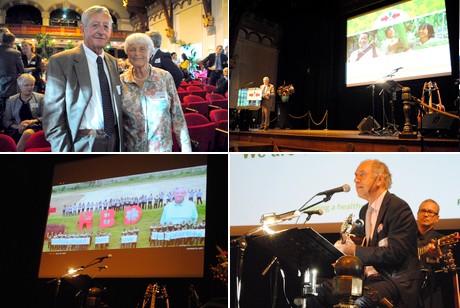 Over thirty years ago, Simon Groot founded a company devoted to breeding tropical vegetables in the Philippines. The company now has 3,000 employees spread throughout South East Asia. Last week, Simon Groot celebrated his eightieth birthday; not with cake and balloons, but with a symposium on the development of horticulture in Myanmar. The importance of this sector, according to Louise Fresco, of Wageningen University, is quite large. "Especially for countries like Myanmar, the stability of the country is inextricably linked to the development of rural areas. Agriculture is of vital importance."

Tin Htut, Secretary of agricultural development in Myanmar, outlined the country's opportunities. Currently, 23.9% of Myanmar's GDP corresponds to agriculture, mainly rice. The country has 55 million inhabitants and plenty of land available. The production process is still far from optimal, with much room for improvement in the fields of post-harvesting and logistics, and the establishment of a proper wholesalers market is still on the agenda. Yet, with the right partners to achieve this, Htut believes that Myanmar has the potential to become a food supplier for the neighbouring regions. East-West Seed also sees these opportunities, and has been observing the developments taking place in the country. The company has been present in the area for ten years, but with a special focus on Myanmar for the past 2 years. This year, the company began construction of the first modern processing plant for vegetable seeds in Myanmar.
Stuart Morris, of East-West Seed in Myanmar, says: "Agriculture is the backbone of the economy in Myanmar. 70% of the people are active in this field, and this will continue to be so for years to come. Over the last 6-9 months, more attention has been paid to vegetables as an opportunity for the agricultural sector." Morris also sees opportunities for Myanmar as an exporting country. "Myanmar is right between India and South East Asia. The country has a favourable climate and good conditions for agriculture." Lack of knowledge
What most characterises the sector is not the lack of seeds, but especially the lack of knowledge and information. Morris told about wrong cultivation techniques, lack of knowledge about the plants, seasons, etc. Such information often comes from the grower's social circle, or from importers who have their own financial interests. "Crop protection is also an issue. All kinds of products are thrown together to kill insects; this leads to dangerous situations for themselves, for consumers and for the environment, and they are completely dependent on the latter."
A greater crop separation, the use of growing beds, proper nutrition and use of foils are some simple cultivation techniques that can greatly increase a company's yield; yet, it is not a good idea to tell growers how to work. "That is not accepted."
For several years, East-West Seed has been setting up a number of companies for demonstration purposes, which show their results to growers in the area; that way, the knowledge is spread throughout the country. After the harvest, there is still a lack of information in the chain. A grower goes to the market and supplies the wholesaler via a trader. This forces them to wait a whole day and profits are uncertain. "A cauliflower grower, for instance, may deliver its produce at the same time as three neighbours and several other growers, without knowing that if it was done a day earlier or later, profits could be twice as high."
By sharing information, East-West Seed also wants to build a lasting relationship with the growers. Greater opportunities for horticulture in Myanmar also entail a higher potential for seed breeders. "We are not an NGO; we are also interested in the opportunities in store for us. Relatively small investments in seeds are made by the country and the potential is huge. "If the results improve thanks to our seeds, if we can add value to the growers' production, investments in seeds will also increase."
See the photo report here.