In the 80’s, a grower in Half Moon Bay, California asked a local heating specialist to take a closer look at his heat supply. More than 30 years later, Cotati based company BioTherm installs and develops all kind of heating installations in greenhouses all over the world. We had a chance to speak with the company’s founder and owner Jim Rearden, who gave us an overview the company’s history and recent projects highlights.

Jim Rearden made his first steps in the heating industry with his father, who worked in installations for buildings and residential houses. After leaving school, he was offered the chance to help build a solar heating firm which created the idea of solar agricultural applications. “In 1980 we stumbled upon Bay City Flower Company, in Half Moon Bay, California. It all started when they asked if our solar systems could be used to deliver heat inside the greenhouses”.

“The company became very successful and the innovations we introduced had a big impact in the American market. We further develop our installations and by means of micro-climate heating we were able to deliver heat right in the root zone,” explains Jim.

“We realised that at that time, especially in the 80’s and early 90’s, the greenhouse industry in the U.S. was rapidly expanding because of the demand for ornamentals, and with the technique that we had developed we were able to democratise hot water heating. We started by elaborating easy to assemble kits allowing growers and their staff to deploy hot water systems and create micro-climates without help from specialists.”

The business grew from there and the company was able to deliver its systems all over North America, demonstrating the feasibility of using Low mass technology with boilers that don’t have much water volume and are made of high heat transfer metals. “We also helped develop some new methods of control, like PID, which would ultimately lead to saving a lot of energy and which made a great impact,” tells Jim.

In the late 90’s and early 2000’s, the big retailers in the U.S. became the largest clients for many growers and started demanding more consistent products with lower costs, forcing growers in a number of regions to go into huge growth loads.

Form half an acre to 30 acres

Jim explains that “some started with less than a half-acre and ended up with 30-50 acres of greenhouses. At the time, we also had to keep pace and learn about deploying our systems in much larger areas, with the complexities involved in that, and we also realised we needed to become familiar with other aspects of greenhouse environment control.” 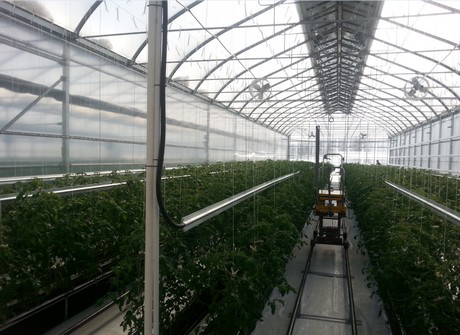 Heating installed by BioTherm in a greenhouse in Fukushima, Japan

Over the years, the company has had to adapt to numerous changes; it first changed its name to TrueLeaf Technologies to reflect the expansion of its activities, as it undertook much more elaborate projects with great success. Jim explains that “then, with the recession, we realised that greenhouse manufacturers had become much savvier about integration, so we looked at our basic business plan and were also offered the opportunity to develop projects for other industries besides horticulture.”

At this time, the company changed its name back to BioTherm and started developing many projects for golf courses, commercial buildings, airplane hangars, etc. “We have also worked with pig farmers, but with our TrueLeaf division, we have stayed true to our roots as a fee-based design bureau, offering complete integrated plans to greenhouse growers who lack the necessary technical knowledge, giving them the choice to purchase the solutions from us.”

Jim has often travelled to the Netherlands and other parts of the world, “allowing us to learn much about local techniques and integrating some of those into our solutions. A lot of the heavier work in the larger installations is often carried out by Dutch crews and sometimes we even bring crews straight from the Netherlands,” assures Jim.

In the United States there are naturally many different climates and geographies that one solution that may work in Western Europe doesn’t necessarily match up to a southern or desert location. “The level of sophistication and complexity in the heating systems somewhat denote what the best solution is, and we pride on being able to get the most out of the Dutch systems for the most specialised conditions.”

According to Jim, one of the big changes BioTherm has had to go through has been its opening to clients in other parts of the world, like Asia and South America. One of the projects the company is especially proud of was developed for a client in Fukushima, Japan, whose goal was to prove that it was still possible to safely offer produce from the area affected by the nuclear power plant failure. 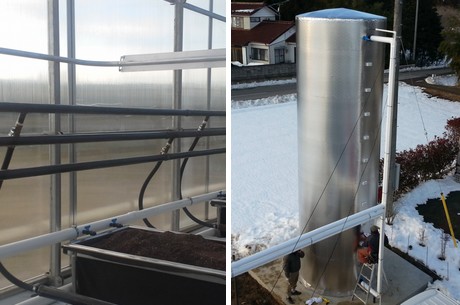 Heating with DuoFin pipe in Fukushima greenhouse and the heat storage tank.

“For that project, we developed In-Crop heat for hydroponic tomatoes using our DuoFin aluminium pipe (bigger version than LITE), along with a 51mm Cart Rail heat system. In addition, large heat storage tanks were installed for CO2 production, which is done by running special low mass boilers to generate CO2, and then storing the hot water that was made for future use,” tells Jim. 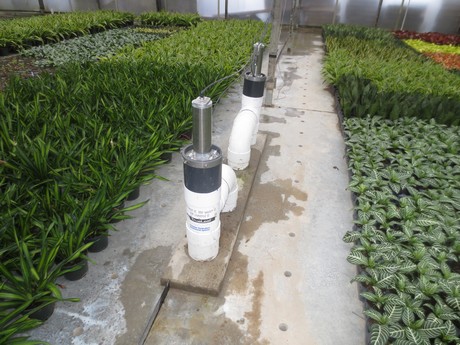 To further illustrate BioTherm’s activities, Jim goes into detail about some other of the company’s projects, such as Fessler's Greenhouse. “Here we did a Flood Floor system with heated floors. The Fessler floor is of the new “cascade” type, whereby the water enters the floor on one side and flows across the zone continuously providing a very even irrigation, as opposed to the fill and drain traditional style of floor sub-irrigation, which in some crops creates a challenge of over-watering some plants and under-watering others because of the necessary grade of the floor.” 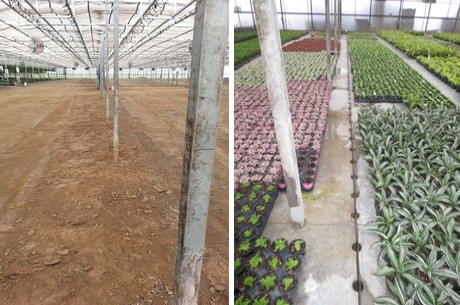 Fessler's greenhouse; Flood floor before and after


Michael's Greenhouse: "Here we did ground heat with our MicroClimate tubing. This was then covered with ground cloth and the plants placed right on top. In addition, we did gutter heat using our DuoFin Lite aluminium finned tube. This is a low mass alternative to 51mm piping. The fin pipe goes together with easy to install connectors and requires no welding. This can be significant in many cases, as the fumes from welding can cause harm to plants, so extra precautions and time need to be taken if repairs are ever needed. This is not the case with our aluminium finned pipe.” 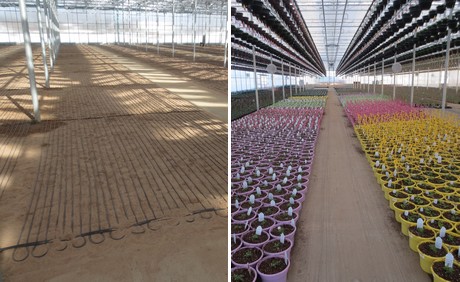 Before and after: ground heat with MicroClimate tubing at Michael's Greenhouse

“The Michael’s project was originally proposed as a flood floor solution, but the budget came down to a decision of having a glass roof or a flood floor. We did what we call a “microclimate sandwich”, whereby small diameter high performance BioTherm® tubes are placed on a layer of weed mat fabric and covered with another layer of weed mat, creating a warm floor “sandwich” that has almost no thermal lag and is very reliable and inexpensive. Thermal conductivity is direct to the plant material.” 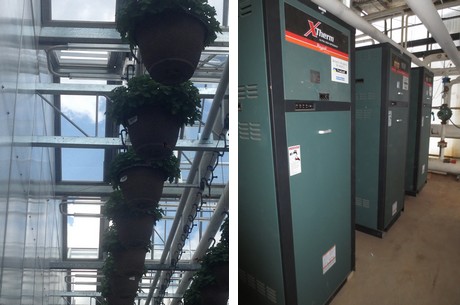 
Bench Heat Project: “For this project we used our MicroClimate tubing on benches for propagation heat. The tubing was placed directly under expanded metal, which provided an even heating surface (trays can go right on top of tubing as well). Also, we used our DuoFin aluminum tubing for under bench heating which can be perfect for rolling or mobile benches.” 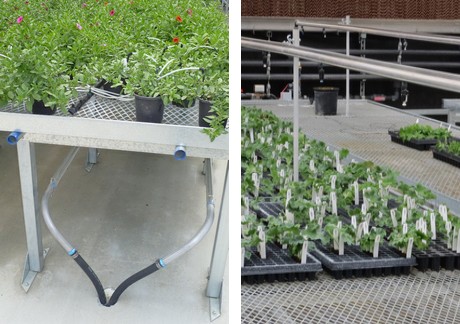 The company has also conducted benchmarking for many growers to show them where they could improve their facilities. Jim affirms that “because of that, we have more retro-fit projects than new constructions right now. We also hired a specialist in the area of grants and finding non-traditional funding sources, and he has been a great asset, allowing us to cut the projects’ costs for our clients,” concludes Jim.