Prominent endeavours to become a global tomato producer. In order to achieve this goal, they are going to export their knowledge abroad by starting the Prominent Greenhouse Academy. 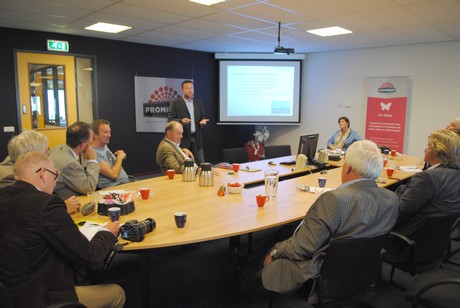 Presentation of the plans by Ferdi Van Elswijk. 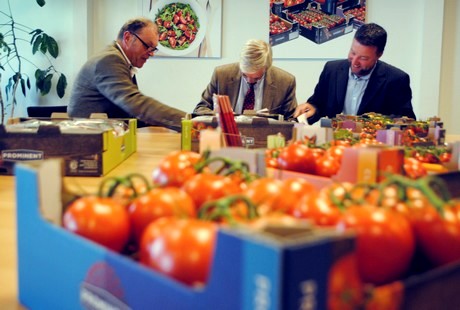 Statement of principles
From October 2014, international growers can visit the Prominent Greenhouse Academy to learn more about producing high-quality greenhouse tomatoes. The training will take 12 weeks and will be held in ‘s Gravenzande, the Netherlands.

To support the initiative by setting up a training program for the Prominent Greenhouse Academy, a statement of principles has been signed by three parties; Lourens van Herk, director Lentiz Cursus& Consult, Peter Scheerder, directpr Agri, Inholland and Ferdi van Elswijk from growers association Prominent. According to Monique Mentjox, the cooperation between these three parties is important because of the fact that they make it possible to connect theory and practice. Together with the Dutch Ministry of Economic Affairs a curriculum has been made to support the practical knowledge of the growers and employees of Prominent

Guided tour through the semi-closed greenhouse of Prominent. Also for the representatives from the Ministry of Economic affairs it was evident that one can learn a lot in a greenhouse.

Semi-closed greenhouse
The Prominent Greenhouse Academy is originated from the semi-closed greenhouse that was built by the growers association in 2006. Besides receiving national interest, this innovative greenhouse also received international interest. Many international growers who visited the greenhouse asked for support to set up a similar project abroad. In the past, Prominent rejected these requests because of the fact that exporting knowledge abroad is a business model for the short-term. However, according to Ferdi van Elswijk from Prominent, a business model for the long-term can be realized by starting long-term collaborations.

The Greenhouse Academy will be used to participate in foreign associations. Companies that are, geographically speaking, no competitor of the Dutch growers are able to study, for a certain fee. However, this is not preferred. Companies within the competition area are only able to participate in the training if Prominent is part of the company. “As a joint-venture or with shares” clarifies Van Elswijk. According to Van Elswijk, not only the international growers from abroad, but also Prominent itself, will benefit. By doing this, Prominent can achieve their goal and will be able to become a global tomato producer. " 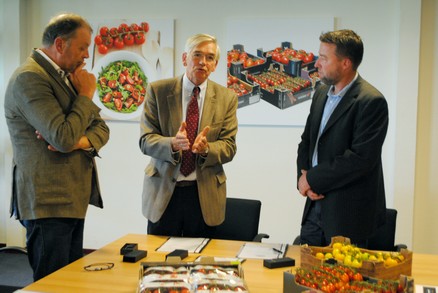 Praise for the plans.

The first concrete projects are already in the pipeline. In the state of Pennsylvania, U.S., for example, a joint venture is being prepared. Besides that, near Khartoum (the capital of Sudan) a fruit producer is willing to start the production of high-quality greenhouse vegetables. Producing greenhouse vegetables in Khartoum has two advantages; the Gulf States can be reached easily and it simplifies trading with the Gulf States, due to the fact that North-Sudan is considered as Islamic.