Coir substrates are one of the most popular, if not, the most popular substrates used by growers worldwide. According to Wim Roosen of Dutch Plantin the popularity of the substrate is increasing every year, even in The Netherlands, where stonewool has been the most favoured substrate for decades. Recently Dutch Plantin introduced a new type of slab that was well received amongst dutch growers. A good reason to ask Roosen a few questions and take a look at the physical advantages of the popular substrate.

Dutch Plantin is a manufacturer of coir growing substrates. "Our cocopeat products have been used by growers for many years in many countries and in various vegetable crops such as tomatoes, cucumbers and peppers, cut flowers (roses, gerberas and carnations), as well as various pot plants", said Wim Roosen of Dutch Plantin.

According to Roosen, the most important benefits of growing in coir is the fast controllability due to the excellent physical properties of the substrate. "Growers can achieve faster growth due to improved rooting; minimal susceptibility to root diseases due to its organic properties and longer durability due to its stable composition."

The new Optima Cocopeat slab contains an excellent air-water ratio which makes it easy to quickly steer vegetable plants by changing the nutrition to a vegetative state as well as a generative state.

Roosen: "The Optima mix is characterized by a high air content, even in conditions when there is little evaporation. This implies that a fast transition from vegetative to generative growth is possible, without a lack of air arising in the substrate. The material dries out less quickly than stonewool in warm conditions, because the material retains the moisture better (see figure 1, pF curve Dutch Plantin Optima). This results in a more stable production and quality." 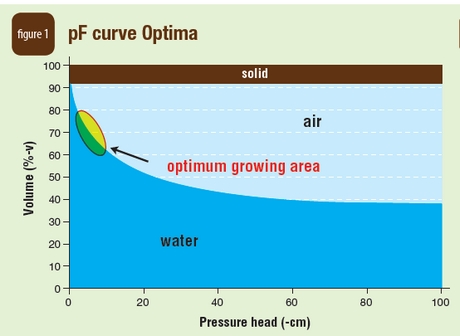 Optima provides just the right water and air ratio. Compared to regular coco, the Optima growbag contains the optimal percentage of air. At the same time, the plant excellently distributes sufficient amounts of water. "This can only be achieved thanks to the highly stable qualities of Dutch Plantin coco", Roosen added.

Dutch Plantin said that Optima’s exceptional quality is also the result of the layering of the growbag. "At the top, the cocopeat ensures rapid horizontal rooting, while at the bottom coco chips regulate drainage for the entire growbag. (See figure 2) The uniformity, visible throughout the bag, is an especially unique quality of our layered growbag type", Roosen said. 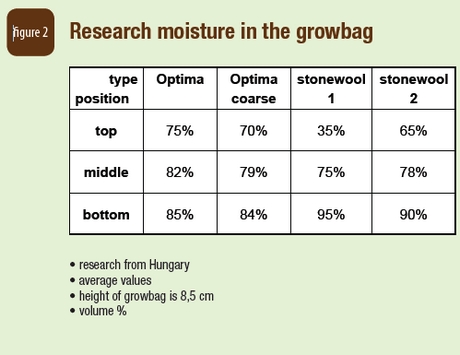 Researchat PlantResearch International in The Netherlands has shown that vegetable plant roots develop faster and more intensively through the Optima cocopeat. This special growbag has 2 layers: a layer of cocochips (5-15mm) at the bottom and a layer of coco-pith (sieved > 1mm) at the top. The mix results in a vegetative growth, faster than on other substrates. This faster growth facilitates early production, thus higher returns are realised."

The presence of useful micro-organisms which thrive in the organic cocopeat ensures the suppression of potential root diseases. "The excellent physical cocopeat properties (more stable moisture content without a lack of air) are highly beneficial in the development and maintenance of healthy roots. Finally, the hygienic conditions at RHP accredited sites and our Organic certification from IMO in Switzerland also contribute to a disease-free substrate. All these positive properties ensure the use of chemical pesticides can be minimised", Roosen concluded. 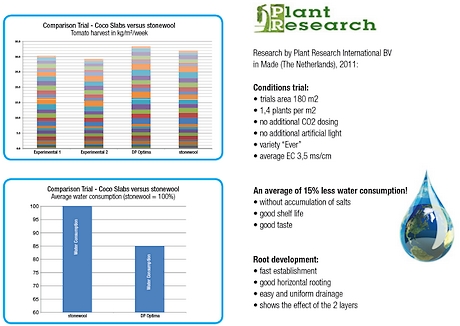 "Cocopeat contains lignin, cellulose and hemi-cellulose" said Roosen in regards to the physical aspects of the product. "Lignin is the most stable component out of these three. The presence of lignin in the cocopeat helps the product to remain stable and retain its positive properties for several years. This in contrast to stonewool, which slowly compacts as a result of pH influences and becomes increasingly wetter. Cocopeat is ideal for re-use. Also the cocopeat is usable as soil conditioner in root-bound soil. Dutch Plantin cocopeat yields greater advantages than stonewool in terms of both an ecological and financial viewpoint."

Please find more information about this subject in the following PDF Leaflets: