The numbers : past and present

According to the Ministry of Agriculture, Russia produced 615 tonnes of greenhouse vegetables last year. That is an increase of 6.5 percent compared to 2012,. The acreage grown in recent years to 2.6 thousand hectares of glass. That is still much less than the 4.7 thousand hectares which were present at the time of the Soviet regime. These greenhouses are now out of date or broken. Sharply rising costs versus slowly rising prices, limits on gas consumption and fierce competition led to poor prospects for growers. In addition, parts of the Soviet Union that no longer belong to Russia, were important for the production of vegetables at that time.

The situation in Russia has changed. The demand for greenhouse vegetables is increasing in the country. So hard that the increasing acreage with greenhouses can not keep up with the demand. Imports exceeded 1 million tonnes in 2012/2013 season - an increase of 8%. But Russia wants to be less dependent on imports, and they will have to be, now that they announced an import stop for their largest suppliers; Europe.

The Russian government is heavily subsidizing greenhouse cultivation. Subsidies on energy, investments and special loans for construction, renovation and modernization of greenhouses and equipment; this all to bring back an area of ​​4.7 thousand hectares in 2020 - as many as there was in the Soviet era. Production must go to 1.7 million tons grown in 2020. This must be in the next six years, about 2,000 acres were added. Is this realistic? 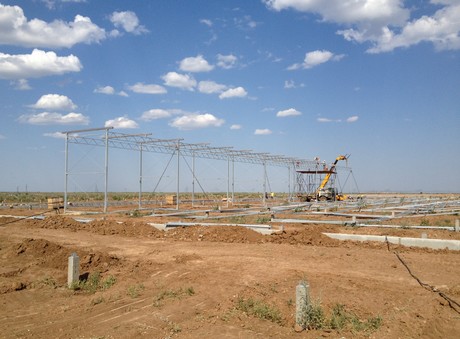 VB Group is involved in several projects within the Russian Federation. "We have our activities broadened considerably," says Edward Verbakel, "So we are not totally depended on only this market." According to him, there is still an increase in demand for greenhouse projects in Russia. "It shows that the countries within the Russian Federation strive to be more self sufficient." However, a self sufficient-Russia in 2020 is not realistic, Verbakel said.

Annually, KUBO works on several projects in Russia. "On one hand, there are existing companies that are building new greenhouses in a moderate way, often to replace existing, antiquated greenhouses. Then there are the investors that start large projects out of the blue. These are basically our customers," says KUBO's export manager Henk van Tuyl. Although there are no direct sanctions against the import of Dutch greenhouses and systems, he notes that the situation has changed. "Our customers are uncertain about possible restrictions in the near future," Van Tuyl. "Also, the last few weeks, the price of the ruble dropped and interest rates rose slightly. Consequently, decisions are delayed, and there are also companies that are considering to search for local technology. "

Is the growth of the acreage Russia aims for possible? Van Tuyl sees that the intended growth is currently not being met. "Among other things, because the bureaucracy starting new projects requires a long breath. Also, obtaining the necessary financing is generally a tough job. It is estimated that in 2013 100-150

ha of new greenhouses are being built, but this is probably 50 % to replace existing greenhouses that are broken. For 2014 about the same is expected. "

"Russia is a country with great growth potential and an important market for us," says John Lagerwerf of Certhon, referring to the various projects of the company in Russia. "But our sales strategy is deliberately spread over several continents." Russia demands Turn Key projects. One example is the project that is currently being built in Belgorod. "Even the plant material comes from the Netherlands. Such projects are written perfectly because we have all the disciplines." In recent weeks, as a result of the boycott, it has become more difficult to do business in Russia. Lagerwerf also mentions the Russian plans for 2020 are ambitious. "But it is also for us, and other Dutch companies, a challenge."

Pieter van Berchum of Gakon is also active in Russia. "Not directly, but through partners," he says. Characteristics of the industry are the scale. "Mainly for tomatoes, cucumbers and peppers and also a section for cultivation of young plants. Russians buying State-of-the-art products." In addition, Van Berchum noted that there are many plans and initiatives in the country. "But before it comes to actual implementation, it takes a very long time. This is a matter of years." Of sanctions Gakon has not much noticed, but the company does have worries about it. "We certainly expect adverse consequences in the near future."