HortiDaily.com has been contacted by Andrei Girz; international student at HAS University of Applied Science `s-Hertogenbosch, The Netherlands, who is in his third of a Horticulture & Business Management Bachelor. His top interest is the sustainable greenhouse cultivation of vegetables, focusing on the cultivation in the hot countries. Andrei believes that also the hot countries, where the cultivation of vegetables is not possible in the open field because of the high temperatures and bad soil structure, deserve to have access to fresh vegetables and not ripened in a container using ethylene after a flight from Europe. This is possible but it needs a bit of effort and determination, he states.

For the moment, Andrei is conducting his first 15 weeks internship in The Netherlands at Priva B.V, under the guidance of innovation specialist Peter Kamp.

Andrei contacted us, because he is busy trying to find his second 15 week intern ship company, which is becoming more and more urgent since he has only three months to find a placement. The student claims that he tried to approach many companies who are pioneering in sustainable greenhouse cultivation, having no success. This is why he contacted HortiDaily.com to help him.

We asked Andrei, why he thinks the companies in the sector do not seem to be interested in offering intern ship positions to students. He said this is not a new issue, his school mates have also encountered problems in finding intern ship positions and, according to his teachers, this situation begun in the same time as the economic crisis. According to Andrei, another reason for the situation is the lack of interest from the companies, in teaching and helping students in a real work situation to develop themselves and their skills acquired at school. In his opinion, the companies should be more open to intern ships, since the same companies will need qualified and high skilled personnel in the future. It is a vicious circle, he said.

Andrei`s academic performances are rated, by his tutor, as being between high-medium and superior level. Also he speaks about him as being a hard working student, a motivated person, a good leader and determined in achieving his goals.

We would like to help this young, enthusiastic and motivated student, please send an email to Andrei at AI.Girz@student.has.nl 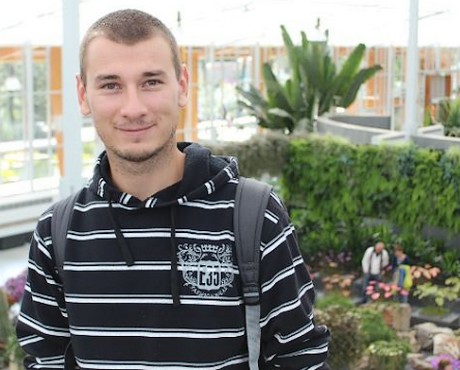