A few miles from the center of Cleveland is not the place most people would expect to find a 3.25-acre, high-tech greenhouse. But after several years of planning and work, Green City Growers Cooperative (GCGC) is several months into their first crop of lettuce grown in their facility that is revitalizing Cleveland's urban center while providing jobs and local produce to the city's residents. 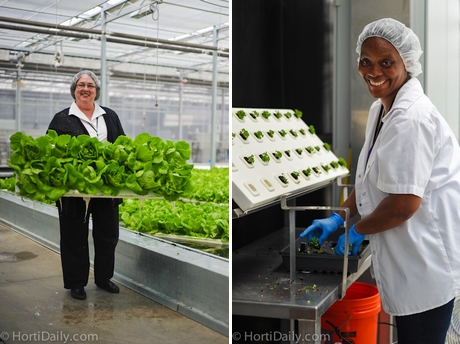 On the left Mary Donnell, GCGC's CEO. On the right an Evergeen employee transplanting the crops on to the rafts.

The Green City Growers Cooperative grew out of an idea from Alayne Reitman, who served on the board of The Cleveland Foundation. Reitman thought an urban greenhouse would work well in Cleveland, so working with The Cleveland Foundation and other stakeholders, she helped spearhead the GCGC project. With the support of the City of Cleveland and The Cleveland Foundation and other collaborators, a hydroponic greenhouse was built last year, three miles from the center of the City, and lettuce started being sold earlier this year. GCGC is now one of the cooperatives under the Evergreen Cooperative Corporation, which also runs a commercial laundry coop and an energy solutions coop. GCGC is run with the corporate social responsibility principles of the parent company which values the triple bottom line—people, planet, profit, explained GCGC's CEO, Mary Donnell.

GCGC greenhouse is equipped with the latest technology.

“All of the cooperatives are located in the City of Cleveland in neighborhoods where the median annual income is less than $18,500, and the Evergreen businesses all hire local people who can become employee-owners of the company,” explained Donnell. “The company's mission is to transform lives and neighborhoods.” In addition to providing meaningful jobs in some of Cleveland's most disinvested communities, the greenhouse's proximity to the city center gives local supermarkets and restaurants the opportunity to provide their customers with locally-sourced produce.

“We're right next to Cleveland's terminal produce market, so most of our customers can pick up their orders right from our greenhouse,” said Donnell. “A lot of lettuce in northeast Ohio comes from California or Arizona, so it's trucked in from thousands of miles away; lettuce can be grown less expensively in the field in those states, but we can compete because we don't have high transportation costs.” GCGC's lettuce is also fresher because it's not subjected to a trip of thousands of miles. 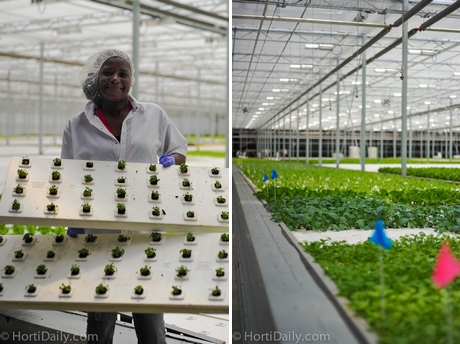 Next to the regular crops, GCGC is also conducting trials with new innovations and tasty leafy greens.

All of the positive aspects of the project – economic development, community improvement and the environmental benefits of locally-sourced produce – made it a popular idea. But even with everyone from the city and Evergreen pulling in the same direction, there were still roadblocks that GCGC had to overcome.

“There are challenges every time you build a non-traditional structure in an urban setting, from assembling the land for an 11-acre site to doing the planning and securing the financing,” said Donnell. “This is a big, complicated project, so there were building codes, permits and a lot of moving parts involved.” But with lots of collaboration, Donnell and team were able to pull everything together for a commercial-scale, high-tech greenhouse in the heart of Cleveland. 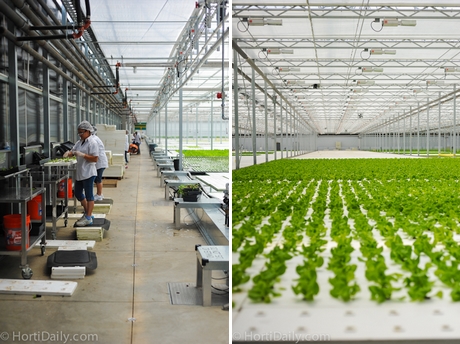 “We're growing leafy greens and herbs on a hydroponic float bed system in a greenhouse with 16-foot gutters and four high-efficiency boilers from the Netherlands,” said Donnell. The climate control system is from Priva, and the crops are floating on ponds filled with water captured from the roof. The current setup has the capacity to produce up to 12,000 heads of lettuce per day, though, with production just ramping up, they have not hit full capacity. The features have paid off, because Donnell said that the business and delicious, high quality leafy greens have been well received by all involved.

“We have been welcomed by our neighbors, the City is pleased with the development of the site, our customers really like our quality and customer service, and so far, everything has worked out well,” said Donnell. “I hope to see similar projects in the future, and it would be wonderful if we can keep expanding.”

More information about Green City Growers Cooperative can be found at www.evgoh.com.